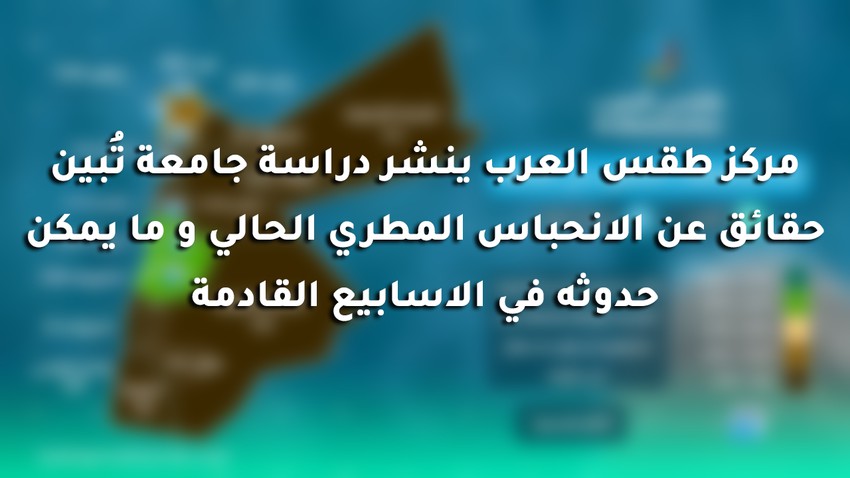 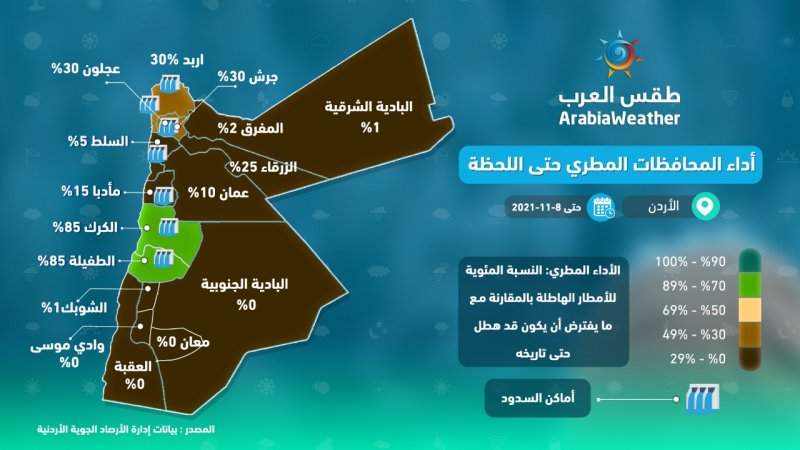 The data of the Jordan Meteorological Department show that the rainy performance of the current rainy season until 8/11/2021 suffers from a significant decrease in the amounts of rain that are supposed to fall for this time of the year in most regions of the Kingdom.

These data show that some governorates of Jordan have not received any rainfall since the beginning of the season, such as the Southern Badia, Aqaba, Ma'an and Wadi Musa. The same data also shows that the relatively best areas in terms of rain performance were Karak and Tafila at 85% of what is supposed to rain in those two areas.

The results of the analysis of the same data indicate that the areas in which dams are concentrated in Jordan (north and center of the Kingdom) suffer from weak rain performance despite its occurrence in several areas. For example, rain performance in Irbid and Jerash was about 30%, while in Ajloun 50% While the rain performance decreased significantly in Balqa, the capital and all central regions, recording modest values of between 2 and 15%.

The current raindrop... Has it happened before?

There is no doubt that Jordan and several areas in the Levant and the Arabian Peninsula are suffering from raindrops until the moment, as the region has not been affected by any major weather conditions that contributed to "significant" rains during the previous 45 days.

Cases of raindrop are repeated in the climatic archives of the Kingdom, where Jordan's climate is characterized by the great fluctuation of rain from year to year due to its occurrence between two climates; Desert climate and Mediterranean climate.

However, one of the most important factors to take into account is that the past rainy season 2020/2021 was not good in rainy performance, and the important rains stopped early in the early spring, and the rain was not present significantly in the last spring, and this matter increases the risk The effect of drought and rain shortage that is occurring now and has been repeated in the late nineties in a close manner.

Causes of the current raindrop

The main reason for the current rain shortage in Jordan during this period is the absence of weather conditions in both parts (atmospheric depressions or cases of atmospheric instability), especially the cases of atmospheric instability that usually increase during the months of October and November, due to the absence of cold air masses in the upper layers of the atmosphere, Which comes from Europe towards the region, where the distribution of air systems in the northern hemisphere led to the rush of these cold air masses towards the Maghreb countries and the central Mediterranean, which witnessed heavy rainfall during this period (higher than average).

This has led to the failure of the cold air masses causing air depressions and states of instability to reach the Levant region and the Arabian Peninsula, and so far there are no indications of an expected change in the air systems during the next 10 days, in a way that would allow rain to return to the Kingdom (and God knows best), However, according to the monthly weather forecast issued by the Arab Weather Center, there are expected changes after the middle of this month - God willing. 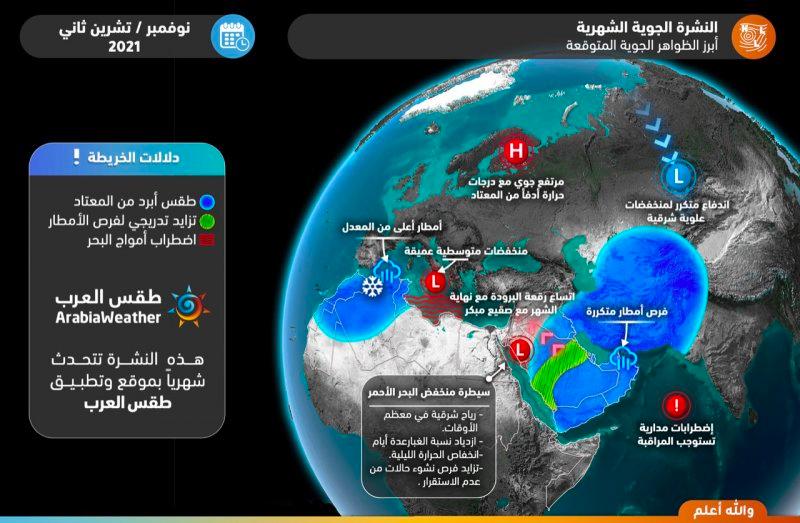 And when we study the data of the Jordan Climate Bank, we find (as previously mentioned) that there are approximately 50 rainy seasons out of 100 seasons, with which the rains started modestly, and the Kingdom suffered in those seasons from weak beginnings of the season.

But it is interesting to note that of the 50 seasons with modest beginnings of rain, 65% of these seasons improved their rain performance to levels that made them end either around or above the average rain.

And when we look at the last 44 years, we find that the percentage has differed somewhat, as rain retardation has become less frequent. For example, out of 44 rainy seasons, the Kingdom witnessed 17 seasons with weak beginnings, or 39% compared to 50% if the comparison is extended. for the previous hundred years.

Of the 17 seasons with weak beginnings, the correlation with the end of those seasons also varied, as the percentage of seasons that ended with rains that turned out to be higher than the average amounted to about 53%, after this percentage was 65% if the comparison extended to the previous hundred years.

And the mercy of God Almighty remains above everything, and we ask the Almighty to grant us relief.