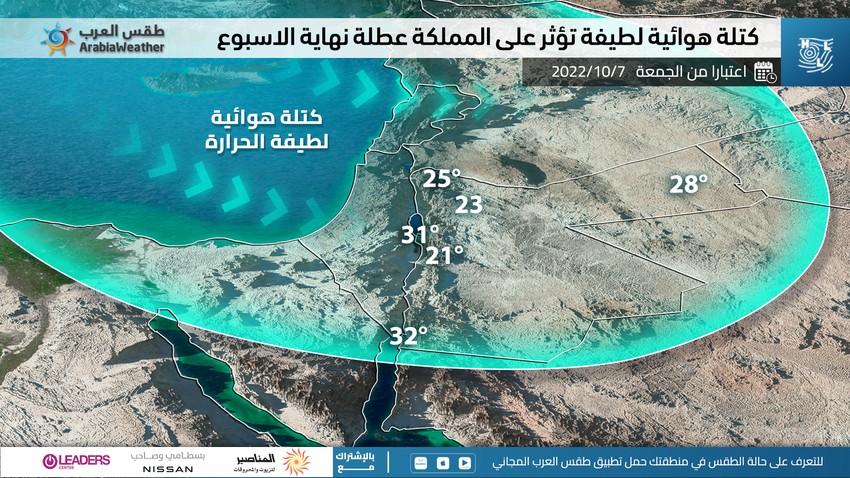 Weather of Arabia - The latest weather maps received from global centers indicate that a nice, hot and humid air mass is expected to rush into the skies of the Levant, including the Kingdom, as of Friday, working to reduce temperatures significantly and clearly to drop by several degrees from their normal rates for this time of the year, After clearly outnumbered over the past few days.

Thursday..a slight decrease in temperature and moderate weather in most areas

In the details, the maximum and minimum temperatures alike decrease in the Kingdom on Thursday, and become around their rates for this time of the year, and the weather is moderate in most areas during the day, and relatively hot in the Badia, the Jordan Valley, the Sea of Mediterranean and Aqaba, while the weather tends to be cold in most The regions of the Kingdom during the night hours, especially in the high mountainous heights, with the appearance of some clouds at low altitudes.

As a result of the positioning of an air rise over the western and central European continent, on Tuesday evening, a relatively cold air mass rushed to the outskirts of northern Turkey and the Greek islands, and it is expected to deepen to the south and southeast - and lose its cold characteristics - and head to the eastern basin region of the Mediterranean, including the Kingdom, and reach In the form of a "humid and gentle air mass" on Friday, God willing. As a result, a pleasant autumnal atmosphere prevails during the day in most areas with the appearance of low clouds, especially in the mountains, and thus the atmosphere is suitable for outdoor sessions and activities with family and friends throughout the Kingdom during the weekend. 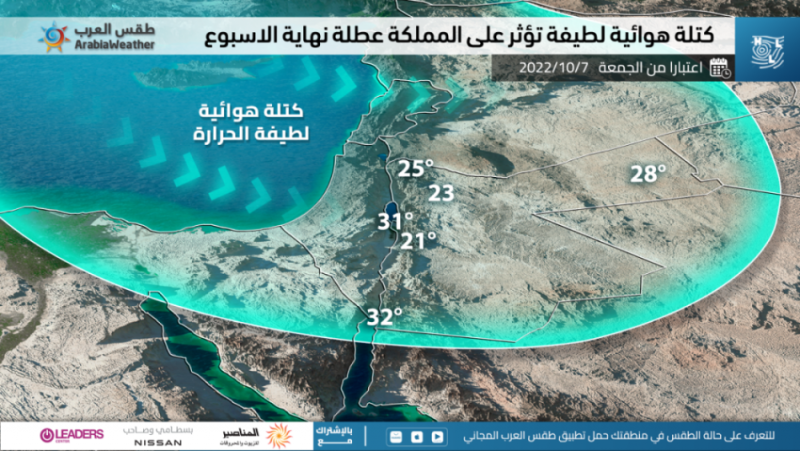 The other most prominent title is the low minimum temperatures at night compared to the previous period, as it is expected that the temperatures will drop with the first hours of the night to less than 17 degrees Celsius, and the lowest at dawn will be around 14 degrees Celsius in most areas, and therefore an atmosphere described as cold prevails relative to the The past nights, and they are not suitable for outdoor sessions, while the temperature drops to a little less in the southern mountains and eastern plains, and this atmosphere requires wearing warmer clothes, given the nature of the cold weather from the early hours of the night until the morning hours of the next day.