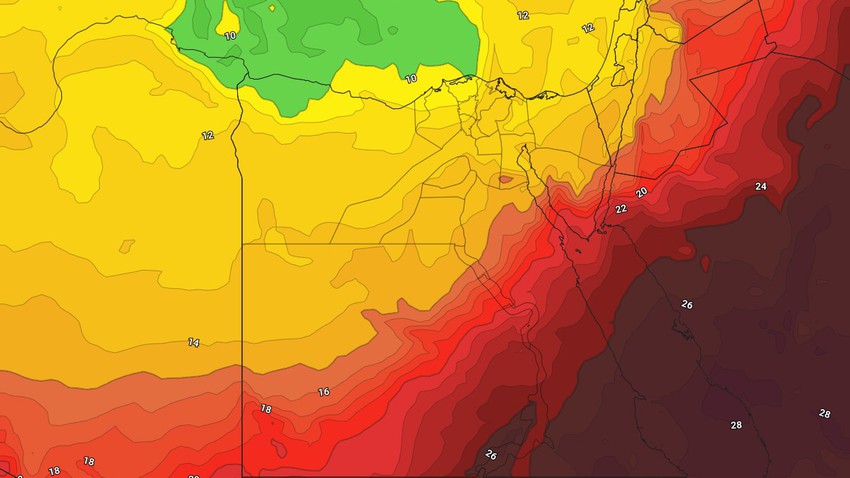 Weather of Arabia - The weather maps resulting from the simulation of the so-called computer simulations indicate predictions of the refraction of the heat wave affecting the country since several days on Monday, so that temperatures begin their journey down from Monday; As a result of the flow of less hot air masses from eastern Europe. The same maps indicate that the country will be affected by the end of the week by an autumn air mass that will further reduce the temperature to autumn levels.

In the details, there is a sharp drop in temperatures in most parts, especially the north, on Tuesday until the end of the week, while they remain higher than their rates for this time of the year by about 2-3 degrees Celsius, and the weather is relatively hot and humid on the northern coast and hot on the northern regions. As far as Greater Cairo, with the appearance of scattered clouds at low altitudes, the atmosphere is more temperate, especially with the morning hours, while it is very hot in the rest of the regions, including Upper Egypt, but it is less hot than the previous days, and the winds are northwesterly moderate in speed, sometimes active On the Mediterranean and parts of the northern coast.

Night temperatures decrease compared to previous nights, and generally a moderate and humid atmosphere prevails in the northern regions, and pleasant with the late night and early morning hours, while it is relatively hot in the southern regions, with the appearance of low clouds during the early morning hours in parts of the north of the country, and the winds are North to northwest, moderate speed, sometimes active.

According to the specialists in the "Arab Weather" Center, it is expected that the country will be affected this weekend by an autumnal air mass with lower degrees than its usual rates, so that the weather is generally mild and autumn in most northern regions during daylight hours, while the weather is pleasant during the night hours. The weather forecast staff in "Arab Weather" will keep you informed about the latest updates in the coming days, God willing.