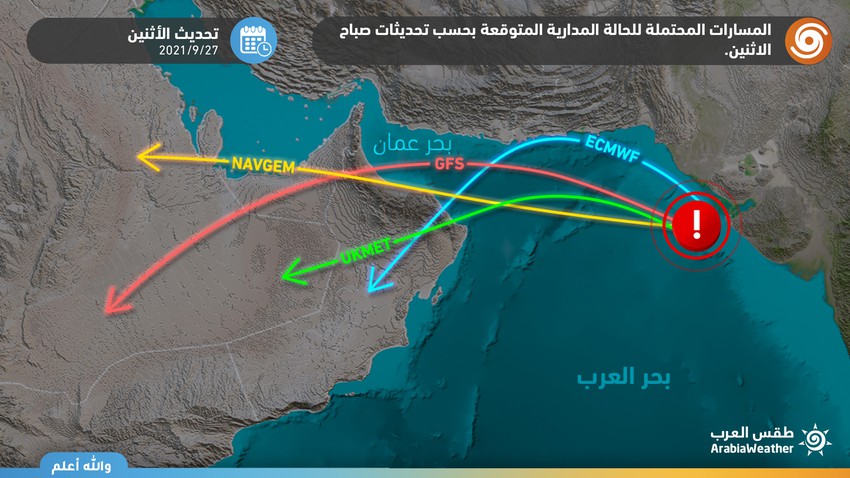 Weather Arabs - watching a cadre of weather forecasts in the Regional Weather Arab Center closely developments in the situation of tropical Gulab that these moments affect the state of India before heading later towards the eastern part of the Arabian Sea, putting the Sultanate of Oman and the UAE under surveillance, given the likelihood of the impact of tropical situation "Gulab on these countries.

The latest output of the numerical weather models processed by the Air Operations Department indicates the movement of the orbital state “ Jalab ” with daytime on Thursday from Indian lands towards southern Pakistan and later to the Arabian Sea , where the tropical state “ Jalab ” develops to advanced levels according to the readings of the numerical models, which puts The Sultanate of Oman and the UAE are among its likely paths. 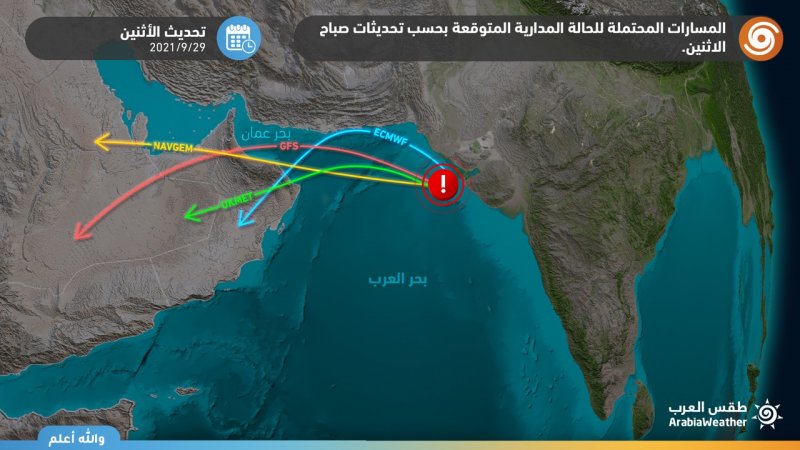 According to the initial treatment, the numerical atmospheric models show the movement of the orbital state “Jallab” towards the UAE on Saturday and early next week. Are the weather conditions ripe for the development of the tropical state of Jallab in the Arabian Sea?

After analyzing the processed numerical forecast models, it was noted that there are several conditions available that help the tropical condition “ Jallab ” to develop in the Arabian Sea and the Gulf of Oman if it succeeds in reaching, and these conditions include:

- weak wind shear (Wind shear): The presence of weakness in the wind shear layer of the atmosphere troposphere (surface layer), it helps the development of clouds and rain rise in high levels in the atmosphere.

Note: The following report shows the outputs of the numerical weather models received this morning, Monday 27/9/2021, and not the forecast of the expected situation, and the Arab Weather website invites you to follow up on the latest weather reports issued regarding the developments of the tropical situation (Jellab).

For more on that, download the Arabia Weather app from here