Arab Weather | The most prominent air systems prevailing in the Arabian Peninsula, coinciding with the onset of the summer season 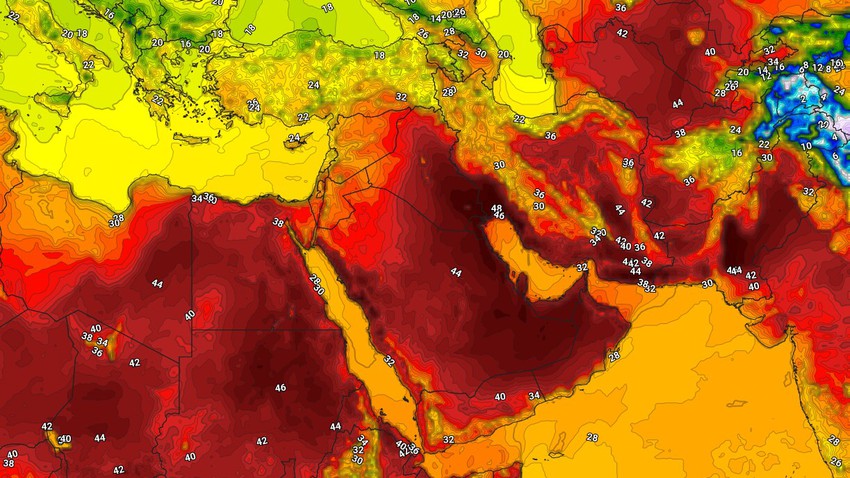 Weather of Arabia - The Arabian Peninsula witnessed a somewhat weak rain rate during the past months, in addition to the marking of little rain in most parts of the Arabian Peninsula, and nearly the first half of the year 2021 passed and the weather systems began to take the summer form and gradually acquire its characteristics, as the first Tuesday falls on June Beginning of the summer in the northern hemisphere, according to meteorology.

Coinciding with the onset of the summer season, the region is affected by several changes in the weather systems, and perhaps the most important of them lies in the decline of rainfalls from most parts of the Arabian Peninsula, with the exception of parts of the south and southwest of the Kingdom of Saudi Arabia and western Yemen, where these areas are affected by the so-called summer formations as a result of the continuous rush of moist winds from the regions. Africa and the Arabian Sea due to a surface extension of the Red Sea Depression on more than one occasion during the summer, and this report reviews the most prominent changes expected in the air systems on the West Island during this period of the year.

The intensity of the heat and fiftieth temperatures in many regions Activity on the winds of Al-Bawareh

The air systems represented by an increase in the surface air pressure in the regions of the Levant operate, while a corresponding decrease in the values of the atmospheric pressure in the east and south of the Arabian Peninsula as a result of the formation of thermal depressions, where the large difference in the air pressure between the two atmospheric systems leads to the blowing of north to northwest winds, or what is called On it by the Al-Bawareh winds, these winds are active and characterized by their severe dryness and constant excitement of dust and dirt, leading to the formation of sandstorms at times over Iraq, Kuwait, eastern and parts of central Saudi Arabia, reaching Bahrain and the UAE.

The height of the orbital divide and gusts of monsoon winds

What is known as the ITCZ orbital separator affects the central African continent in these months, specifically from May to October, while the orbital separation gradually rises towards parts of the Arabian Peninsula during July and August as a result of the trade winds from the northern and southern hemispheres.

On the other hand, starting from the beginning of June, southwesterly winds, or what is known as monsoons, rush in the regions of the Indian subcontinent, where they carry with them very large amounts of relative humidity in the various layers of the atmosphere to increase the density of thunderstorms and increase the rain in them, where and with the presence of India's seasonal depression a convergence occurs These winds lead to the formation of torrents and floods in these areas, especially during the months of June and July. 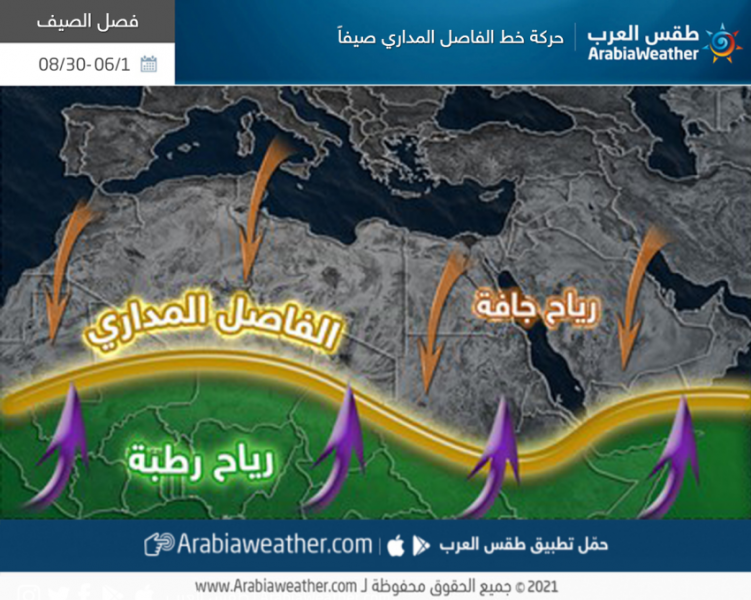 The effect of these weather systems on the Arabian Peninsula varies from season to season, and parts of Somalia and Sudan, reaching parts of southern and southwestern Saudi Arabia, Yemen and the Sultanate of Oman are usually affected by an activity of cumulus rain clouds, bringing with it summer rains, especially during the months of July and August with the peak of wet monsoons.