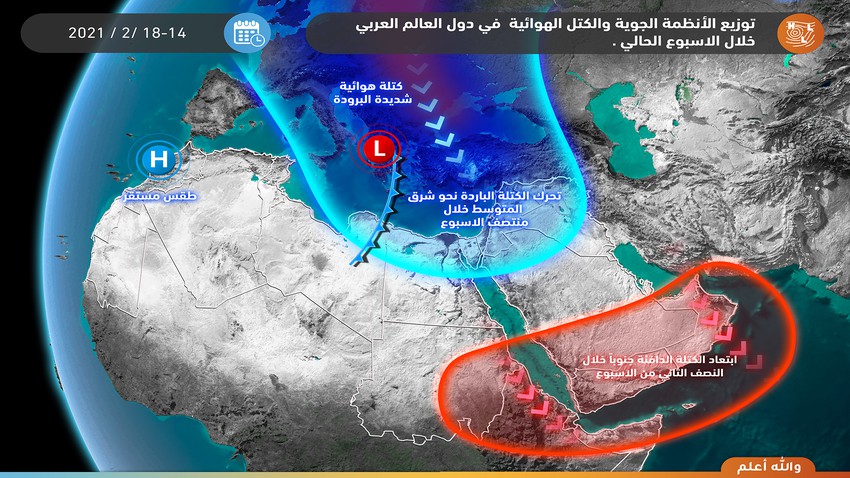 Weather of Arabia - the air systems expected this week are represented by the domination of the Azorean highland over the western Mediterranean and the stability of the airspace, while a polar and very cold air mass rushes towards many countries of the Eastern Mediterranean with the middle of the week, details:

Control of the Azores Highlands over Morocco, Algeria and Tunisia, and a stable but cold atmosphere

The Azores air height dominates Morocco, Algeria and Tunisia most of the current week, where a state of calm and stability prevails over the air, but from the stability of the atmosphere the weather will remain cold during the daylight hours and very cold at night hours, and it is worth noting that there is a weak chance of local rain falling in parts From the Algerian coast with the weekend, God willing.

A cold air mass over Libya and Egypt, and a hot air over Sudan

The weather will be stable and warm in Libya and Egypt at the beginning of the week, except for a radical change in the airspace as a result of the progress of extremely cold and polar airways towards northern Libya and later in northern Egypt, where temperatures drop and strong winds blow, causing Mediterranean waves to rise on the beaches, with heavy rains in Many areas of northern Egypt and Sudan, as snow falls over the northern peaks of Sudan and the high mountainous elevations in Egypt.

A stable start in the skies in Kuwait and Saudi Arabia, and an increase in the chances of rain after the middle of the week

The weather is stable and hotter than usual with the beginning of the week, and temperatures drop and rain falls in large areas on Wednesday.

While there is a significant rise in temperatures in Saudi Arabia until Tuesday, with temperatures dropping significantly in the north and center of the country, starting from Wednesday and through Thursday, and an opportunity for showers of rain in some areas.

A warm and stable atmosphere over Bahrain and Qatar

The weather will be more stable, hotter and warmer in Bahrain and Qatar for most of this week, amid expectations of a decrease in temperatures over the weekend, while the weather remains stable.

Thirty temperatures over the UAE, Oman and Yemen, seven days a week

The weather is warmer and more stable than usual in the United Arab Emirates, the Sultanate of Oman and the State of Yemen, and the temperatures are at thirtieth levels during the day, but the weather will remain cooler during the night hours, God willing.

and God is superior and knows best.