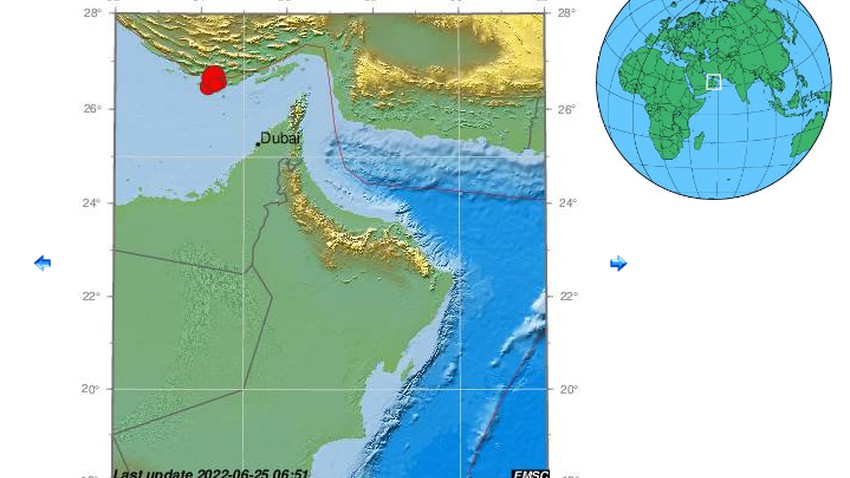 Arab weather - A strong earthquake shook the Gulf waters in southern Iran, in the early hours of Saturday morning. There were no immediate reports of deaths or damage from the earthquake, which was felt by some residents in the neighboring United Arab Emirates.

Al-Hurra TV quoted Iranian television as saying that an earthquake of magnitude 5.6 occurred between the port of Charak and the island of Kish at a depth of 22 kilometers. Meanwhile, the Euro-Mediterranean Seismological Center said that a 5.7-magnitude earthquake shook southern Iran and was eight kilometers below the surface of the earth.

Officials told state television that the same area had experienced about 100 earthquakes and aftershocks over the past 10 days.

The stations of the National Seismological Network of the "National Center of Meteorology" recorded an earthquake of magnitude 6.0 - Richter in southern Iran at 07:37, corresponding to 06/25/2022, according to the local time of the UAE.

The National Center of Meteorology in the Emirates stated that the stations of its National Seismic Network recorded an "earthquake of magnitude 6 in southern Iran at 07:37, corresponding to 06/25/2022, according to the local time of the UAE."

Last Wednesday, Afghanistan witnessed a 6.1-magnitude earthquake, which killed more than 1,000 people, and injured more than 600.