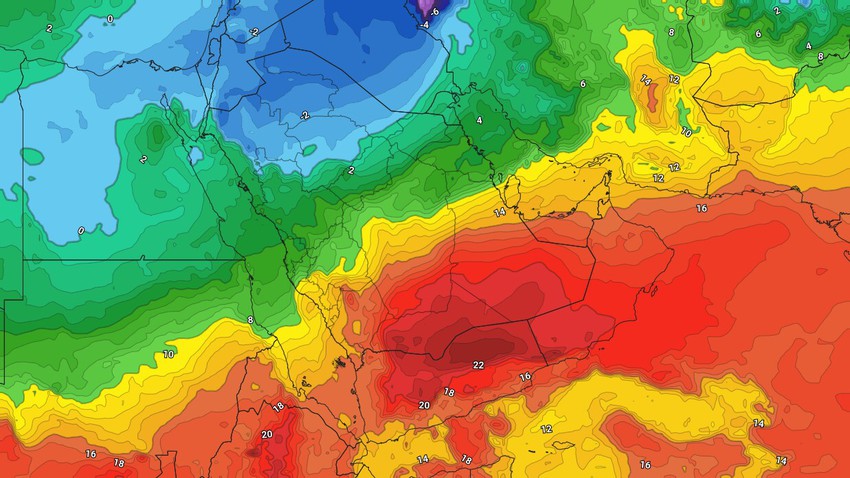 Arab Weather - The latest output of the numerical models processed by the Air Operations Department at the Arab Weather Regional Center indicates the rush of a very cold polar air mass to various regions of Saudi Arabia, extending towards Kuwait, and rare snow expected in northern Saudi Arabia.Details

Polar winds and colder than usual weather in Kuwait from Tuesday

It is expected, God willing, that the weather will be pleasant in all regions of the country on Sunday, and temperatures will decrease on Mondays, and the weather will tend to be cold to relatively cold with the appearance of medium and high-altitude clouds that may lead to showers of rain.

Winds will be northwesterly moderate, energizing at times, and remarkably increasing the sense of cold.

Cold winds rushing to Bahrain and Qatar, starting from Tuesday

It is expected, God willing, that the weather in Qatar and Bahrain will be nice to warm in the coming days on Sunday and Monday, and temperatures will drop at night and the weather will tend to be cold to relatively cold at night in both countries with an increase in surface humidity levels with frequent chances of fog formation in different areas .

As of Tuesday, cold winds that reduce temperatures and the prevalence of relatively cold to cold weather prevail in both countries, especially during the night hours, coinciding with the blowing of northwesterly moderate-speed winds that are sometimes active and accompanied by strong flashes that significantly increase the sense of cold.

Clouds appear at different altitudes, especially medium and high clouds, with the chance of rain showers over the coming days, especially in parts of Qatar, and chances of rain increase in Bahrain on Tuesday.

It is expected, God willing, that the weather will be warmer than usual in the Emirates during the coming days during daylight hours, and temperatures will approach the 30 degrees Celsius barrier in some areas.

As of Tuesday afternoon and evening, northwesterly winds rush in, bringing temperatures down significantly, starting from the west of the country, passing through to the rest of the regions.

The northwest winds will continue to blow on Wednesday, as temperatures decrease and the weather tends to be cold in the northern regions and pleasant in the interior.

All this coincides with the appearance of clouds at different altitudes, especially medium and high, with the chance of scattered showers of rain in some areas.

God willing, the weather in the Sultanate of Oman is expected to be pleasant in the mountainous heights, especially the northern northern, while it will be warm in the rest of the regions during the noon and afternoon hours, and the weather tends to be cold to relatively cold at night in some areas, especially the mountainous heights during the late night hours.

Clouds appear at different heights sporadically and in some areas, with a weak chance of local showers of rain in parts of the northern regions.

With moderate to brisk southerly winds accompanied by strong gusts at times, it stirs up dust.

It is expected, God willing, that a very cold Siberian polar air mass will rush to Saudi Arabia from Sunday and for several days, as temperatures will drop significantly in the coming days and the weather will be cold in most regions except for the coasts of the Red Sea and the Empty Quarter regions, while it is very cold in the northern regions. .

At night, temperatures drop below zero degrees Celsius in the northern regions, and ice and freezing are formed in those areas, and the weather is very cold in most regions of the country at night.

As for the chances of rain and snow, it is expected that the polar winds will rush to the northern regions on Sunday, coinciding with the rainfall, as rain turns into snow accumulated on areas in the northern borders and Arar, and with the deepening of the polar winds Monday, coinciding with the availability of rain in northwest Saudi Arabia. Almonds in addition to the heights of Tabuk in a cumulative manner.

While the heights of the southwest of the Kingdom and the central regions are witnessing unstable weather conditions that result in thunderstorms, which are not excluded to be heavy at times, and include the capital, Riyadh.

With winds blowing from different directions, they are moderate in speed, sometimes active over some areas and are accompanied by strong gusts in the northern areas.

Kuwait - Weekend | Hot weather and temperatures for forty in many areas