Arabian Gulf | Forty temperatures, thunderstorms, and active winds that raise dust and dust in some areas during the coming days. 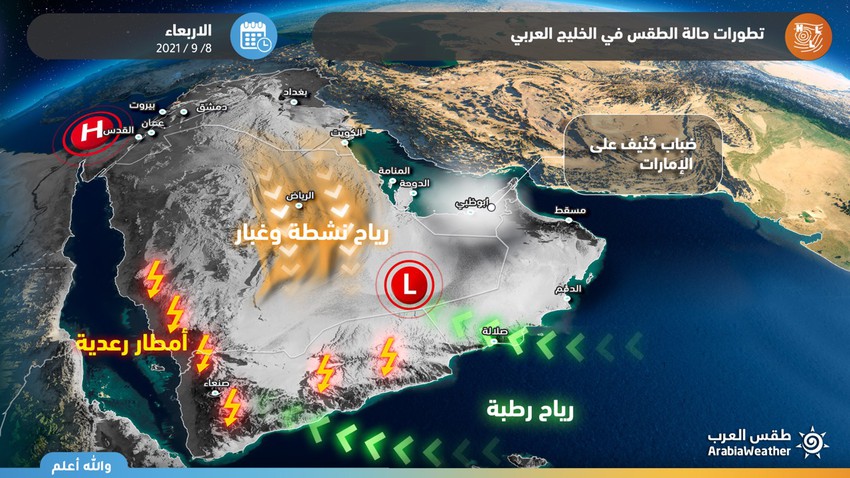 Arab Weather - The latest outputs of the numerical models processed by the Air Operations Department of the Arab Weather Company indicate expectations that extremely hot weather will continue in all regions of the Arabian Gulf during the coming days, coinciding with the continued emergence of unstable weather conditions in some areas, especially in Saudi Arabia, and strong winds blowing at speed Provoking dust and dust in some areas. the details

It is expected, God willing, that there will be an escalating rise in temperatures in the coming days, and the weather in the State of Kuwait will be very hot during the day, and relatively hot at night, with maximum temperatures exceeding the mid-forty over some areas, with the appearance of some medium and high clouds, especially in the middle of the week.

Northwesterly moderate to active winds, accompanied by strong gusts that touch the 70 km/h barrier, which leads to dust and dust and the formation and rush of dust waves from southern Iraq, so that the weather is generally dusty.

Very hot weather in Qatar and Bahrain, with temperatures in the forties and fog at night in parts of Qatar

It is expected, God willing, that the weather in Bahrain and Qatar will be very hot during the day in the coming days, and temperatures will touch the 40 degrees Celsius barrier in Bahrain and Qatar. Speed activates sometimes, especially at the end of the week, and moist sea air currents flow, which raise surface humidity levels, which doubles the feeling of heat and tightness, day and night.

As a result of a noticeable increase in surface moisture levels on some nights of the week, and the wind speed remaining still, fog is expected to form in parts of Qatar.

It is expected, God willing, that the extremely hot weather will continue in the Emirates during the coming days during daylight hours, with a further rise in temperatures to exceed the mid-forties in some interior regions in the second half of the week, and the weather will be hot at night, with fluctuating winds The direction is northwesterly moderate, sometimes active and causing dust and dust to be raised in the interior, including the appearance of clouds at different altitudes, especially medium and high, so that there is a weak possibility of thunder showers of rain in parts of the eastern highlands and southern regions.

According to the computer outputs, it is expected that the humid air currents will continue to flow towards the coastal areas and limited parts of the western interior regions, so that fog is likely to form over the coming nights of the coming days on many internal areas, especially western ones, in addition to some coastal areas. It is not excluded that the fog will be thick at times.

It is expected, God willing, that the weather in the Sultanate of Oman will be relatively hot in the summer to hot in the northern mountainous heights, moderate but stifling in the coastal areas, and very hot in the rest of the regions so that temperatures are in the forties levels above many of the interior regions, and the weather will be relatively hot at night, It tends to be moderate in some areas, while it becomes mild in some coastal areas with high humidity and dense fog formation in some southern coastal highlands, including Salalah.

Clouds appear at different heights, and it is possible that showers of rain will fall in limited parts of the Hajar Mountains during some days. And accompanied by strong gusts cause sea waves to rise on the shores of the Arabian Sea.

Hot to very hot weather in Saudi Arabia, with active dust and dust winds, including Riyadh

It is expected, God willing, that the weather in the Kingdom of Saudi Arabia during the coming days will be moderate to relatively hot in the southwestern highlands, generally hot to very hot during daylight hours, so that temperatures will be in the forties levels in the capital Riyadh and many regions, and the weather will be pleasant at night in The southwestern highlands and the northwestern regions during the late night hours, hot in the rest of the areas, with the appearance of clouds at different heights.

It is expected that temperatures will touch the end of 40 degrees Celsius in some areas in the coming days, specifically the interior of Umluj, coinciding with fluctuating winds blowing to north / northeast, moderate speed to active speed, accompanied by strong flashes exceeding the barrier of 60 km / h and raising dust and dust in Many areas, including parts of Medina, Al Baha and Taif, in addition to the capital, Riyadh. It also includes dust and is more focused on Hafr Al-Batin.

It is expected that thunder clouds will continue to form on parts of the southwestern highlands in the coming days, after which heavy thunderstorms will fall sometimes, causing the flow of valleys and the formation of torrents. .