Arabian Gulf | Hot weather continues and active winds cause dust and dust, and turbulence on the beaches 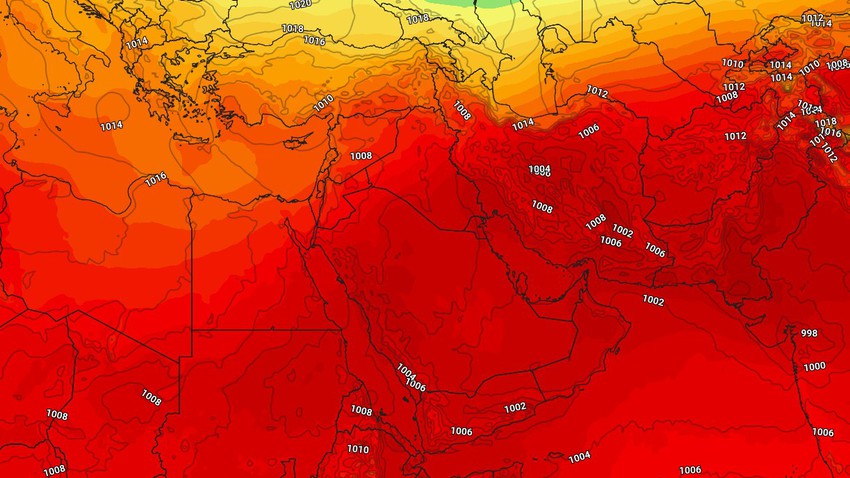 Arab Weather - The latest output of the numerical models processed by the Air Operations Department at the Arab Regional Weather Center indicates expectations of a temperature difference in all regions of the Arabian Gulf during the coming days, and hot weather is the prominent feature, coinciding with the blowing of active winds that cause dusty weather and turbulent waves. the details

A moderate northwest blows to active speed on Sunday and Monday, and is accompanied by strong flashes that exceed the 70 km / h barrier, especially on Sunday, which leads to the formation of local dust waves, transmitted from Iraqi lands, and an alert for patients with respiratory system and eyes.

There will be a decline in the intensity of the winds on Tuesday and the rest of the days, to be northwesterly to northeasterly humid, light to moderate in speed, sometimes active.

Variation in temperatures in Qatar and Bahrain, active winds and turbulent waves on Sunday

It is expected, God willing, that there will be a difference in temperatures in Qatar and Bahrain, so that the weather in Qatar will be hot to very hot, hot in Bahrain during the day in the coming days, and temperatures will exceed the barrier of 40 degrees Celsius in parts of Qatar with the second half of the week, while the temperatures will be thirty In Bahrain, the weather is pleasant at night in both countries, with the appearance and scattering of some clouds at different heights over some areas.

It is expected that moderate to brisk northwesterly winds accompanied by strong gusts touch the 70 km/h barrier, and they will raise dust and dust and cause the waves of the Arabian Gulf to rise more than a meter and a half around the coastal areas. Moderate speed activates sometimes.

With the flow of humid marine air currents and a noticeable rise in surface humidity, especially at night, causing fog to form in parts of Qatar and Bahrain.

Forty temperatures in the Emirates, and chances of thunderstorms continuing in some areas

It is expected, God willing, that the extremely hot weather will continue in the Emirates during the coming days during daylight hours, with temperatures exceeding 40 degrees Celsius in some interior areas, and the weather will be pleasant to warm at night, with moderate to brisk northwesterly winds blowing on Sunday. Accompanied by strong gusts that touch the 60 km/h barrier on the western interior regions, which leads to turbulence on the shores of the Arabian Gulf, and raises dust and dust on the interior regions, with a decrease in wind speed from Monday, to become volatile to northwest, light to moderate speed, active sometimes and be Dust and light dust repellent.

Clouds will continue to appear at different altitudes, especially the medium ones. Some cumulus clouds may be interspersed with them, so that there is a possibility of thunderstorms of rain in parts of the eastern highlands.

According to the computer outputs, it is expected that the humid air currents will continue to flow towards the coastal areas and the western interior regions, so that the opportunity is ripe for the formation of fog on the coming nights on parts of the interior, especially the western ones, in addition to some coastal areas, especially in the second half of the week.

The clouds appear at different heights, especially the middle clouds, as a result of which there is a possibility of showers of rain in some areas during the coming days, with fluctuating winds blowing in a direction to southwesterly moderate speed for speed activities, accompanied by strong flashes that raise dust and dust in the interior regions.

Hot to very hot weather in Saudi Arabia, with thunderstorms forming in some areas

It is expected, God willing, that the weather in the Kingdom of Saudi Arabia during the coming days will be warm to moderate in the southwestern highlands, relatively hot in the northwestern regions, while it will be hot to very hot in general in the rest of the regions during daylight hours so that temperatures will be around to slightly above The middle of 30 degrees Celsius in the capital, Riyadh, while temperatures exceed 40 degrees in the Empty Quarter, in addition to the interior regions of the coasts of the Red Sea, and the weather at night is pleasant to relatively cold in the southwestern highlands, with temperatures in those areas touching the 15 degrees barrier within hours. Late night in some parts, while the weather in the northwestern regions during the night hours is pleasant, while it is pleasant to relatively hot in the rest, especially during the late night hours with the appearance of clouds at different heights.

In conjunction with fluctuating winds blowing to northwesterly moderate speed, sometimes active and accompanied by strong flashes in some areas and periods, especially northeastern and eastern ones, and raising dust and dust, while the winds are western to northwest active on the shores of the Red Sea, causing turbulence and rising waves for more than About two meters in some areas.

It is expected that thunderstorms will continue to form on parts of the southwestern highlands in the coming days, with thunderstorms falling, and chances of rain include Abha, Al Baha and Taif.