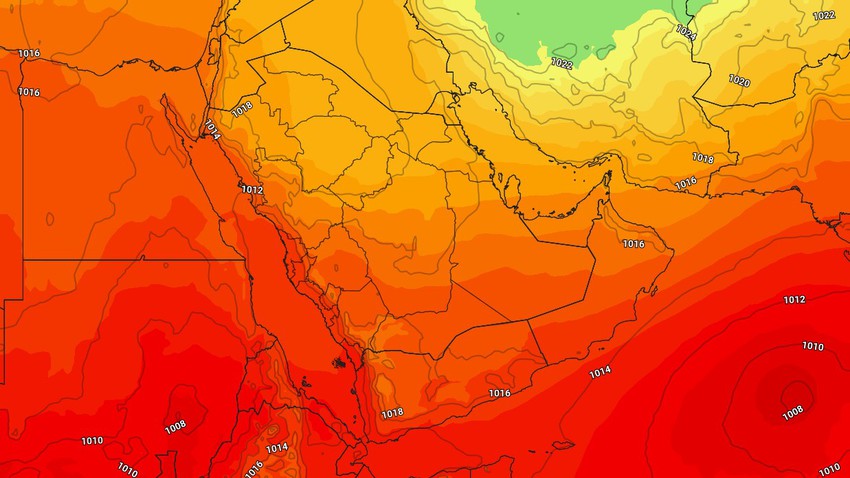 Arab Weather - The latest output of the numerical models processed by the Weather Operations Department at the Arab Regional Weather Center indicates a decrease in temperatures and an increase in the weather at night with rain in some areas.

A drop in temperatures in Kuwait in the coming days

Northwesterly winds will blow light to moderate speed, sometimes active over some areas.

Hot to relatively hot weather in Qatar and Bahrain

It is expected, God willing, that the weather in Qatar and Bahrain will be hot to relatively hot during the day in the coming days, and the temperatures will be in the late twenties and early thirties, and the weather will be pleasant until night in both countries with a rise in surface humidity levels, and light north to northeasterly winds are expected. To moderate speed it activates sometimes.

With the appearance of clouds at medium and low altitudes, especially at the beginning of the week, showers of rain are likely to fall on parts of Qatar, which may be thunderstorms at times.

It is expected, God willing, that the weather will be hot to relatively hot in the Emirates during the coming days during daylight hours, and the weather will be pleasant at night, with light to moderate northwesterly winds, sometimes active in some areas, and clouds appear at medium and low altitudes, and showers fall. From the rain in some areas, especially the eastern ones, the rain is sometimes heavy and accompanied by the occurrence of thunder.

Hot weather in Oman for the coming days

It is expected, God willing, that the weather in the Sultanate of Oman will be mild in the northern mountainous heights, relatively hot to hot in the rest of the regions, and the weather will be pleasant at night, tending to be cold in some areas, especially the mountainous heights during the late night hours.

With the appearance of clouds at medium and low altitudes, the opportunity is ripe for showers of rain on parts of the Hajar Mountains, especially at the beginning of the week, and winds from fluctuating light to moderate directions, sometimes active over some areas and causing dust and dust.

A drop in temperatures in Saudi Arabia

Coinciding with the blowing of winds from fluctuating directions to the southeast, moderate speed, sometimes active and accompanied by strong flashes in some areas and periods, especially the western regions, and they are exciting to dust and dust.

Showers of rain, thunderstorms, will fall in narrow geographic ranges from the heights of the southwest of the Kingdom at the beginning of the week, with a decrease in the chances of rain in the second half of the week.