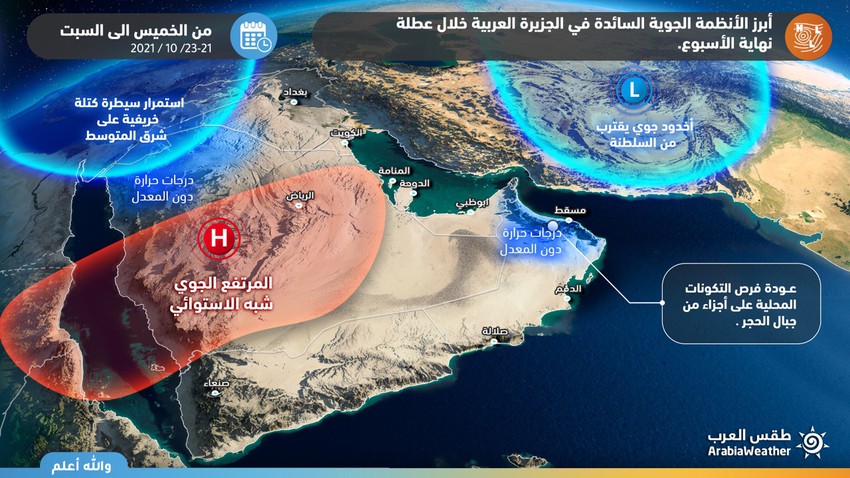 Low chance of thunder showers in parts of Asir and Jizan

In the details, it is expected that temperatures will tend to rise slightly in the north and northwest of Saudi Arabia during the weekend, while remaining below their rates for this time of the year, as a result of the continued flow of autumn air currents originating from the Mediterranean, so that warm weather prevails in general in the northern regions. .

While the weather will be hot in the rest of the Kingdom and mild over the southwestern highlands, with a weak possibility of scattered showers and thunderstorms in limited parts of Asir and Jazan during the weekend.

An air gully is approaching the Sultanate of Oman and the UAE, with indirect effects

Hot summer weather continues to affect the Sultanate of Oman and the UAE, so that hot weather remains the prominent feature of the weather in these two countries, and temperatures are in the thirties Celsius in most of the interior regions with humid weather in all regions, and the opportunity arises from Friday for the appearance of some convective clouds over Limited parts of the eastern mountains of the Emirates and the Hajar Mountains in Oman.

The rains are mostly light to medium, and they may be heavy in some narrow geographic ranges, which may lead to the flow of valleys and reefs in some geographically limited and guest areas.

There are no drastic changes to the atmosphere in Kuwait, Bahrain and Qatar

Humidity has decreased in Kuwait and increased in Bahrain and Qatar

It is not expected that a drastic change in temperatures will occur in the coming days, with the increase in surface humidity in Bahrain and Qatar, and the temperatures will be in the mid-thirties Celsius in all the interior regions of Qatar and Bahrain, so that they are about to slightly higher than their normal rates for this time From the year, the winds will be northeasterly active, stirring up dust and dust in many inland areas. 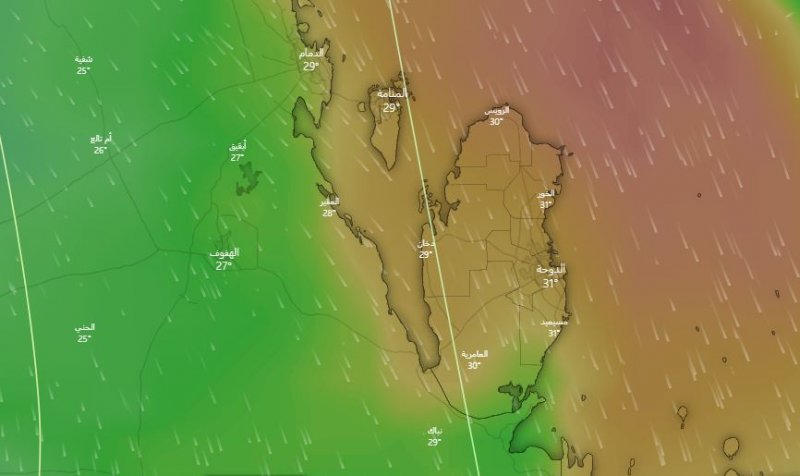 As for Kuwait, the weather will continue to be hot in most areas and temperatures will be in the early thirties in the interior regions, and the northern winds are active in Kuwait and raise dust and dust in some areas, especially desert areas, which may decrease the horizontal visibility, God willing.

Weather and temperatures in the Gulf capitals on Friday 10/22/2021: