Arabian Gulf | Unstable weather conditions in some areas and activity in dusty and dusty winds in other areas.. Details 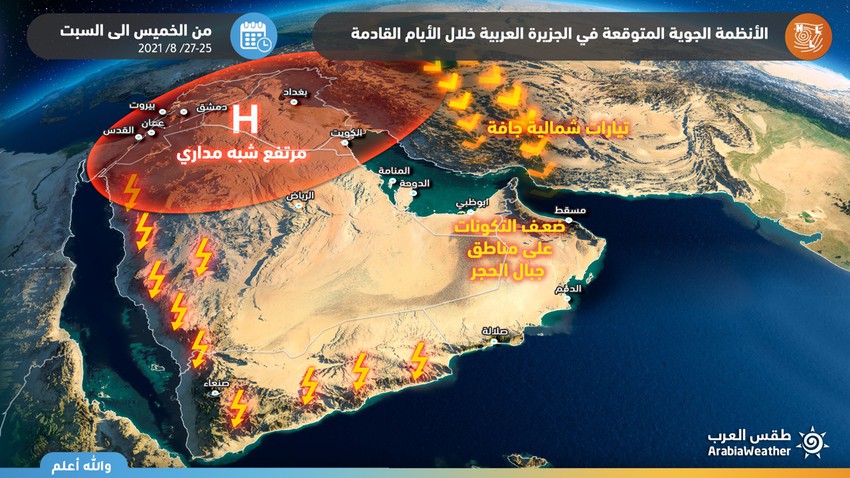 Weather of Arabia - The weather systems in the Arabian Peninsula during the next few days are represented by the control of the subtropical air altitude in the northeastern regions of it, which ensures that temperatures rise in those regions at the expense of the penetration of the eastern regions into the atmosphere of the Arabian Peninsula, which leads to the continuation of unstable weather conditions in Western regions, and here are the details:

Thunderstorms in many western regions

In the details, as a result of the intensification of the subtropical high in the north, the Sharqiyat, which are easterly winds in the middle and high layers of the atmosphere, continue to blow, which prevails in unstable weather conditions in many areas on Thursday and Friday, so that the rains include parts of the southwest of the Kingdom to parts of the Taif and the heights east of Makkah Al-Mukarramah and parts of the Al-Madinah Al-Munawwarah region, and the rains extend to parts of the Tabuk region, especially the south and parts of the west of the Riyadh region administratively. These rains are of varying intensity, sometimes heavy, which may lead to the formation of torrents and the flow of valleys in some areas. That is because the cumulus and thunder clouds that form over the mountains will find their way towards the western slopes and perhaps the coasts sometimes, especially the southwestern areas.

In conjunction with this atmosphere, temperatures will rise additionally during the coming days in the northern and eastern regions of the Kingdom, and the northeastern winds are active on Friday in the eastern region and in limited parts of the Riyadh region administratively, raising dust and dust, with the axis of wind activity moving on Saturday to the region Central to the southwestern regions.

Saudi Arabia | Details of weather fluctuations and chances of rain on Tabuk and Madinah, starting from Wednesday

Saudi Arabia | An expected return to dusty weather in some regions of the Kingdom at the end of the week..details

The air rise intensifies in the high air layers on Thursday and Friday over the whole of eastern Arabia and Iraq, which intensifies the heat of the hot air mass that originally dominates the region, and the atmosphere becomes hot in all regions and temperatures approaching 50 degrees Celsius in many areas. The interior, provided that temperatures tend to drop again from Saturday. 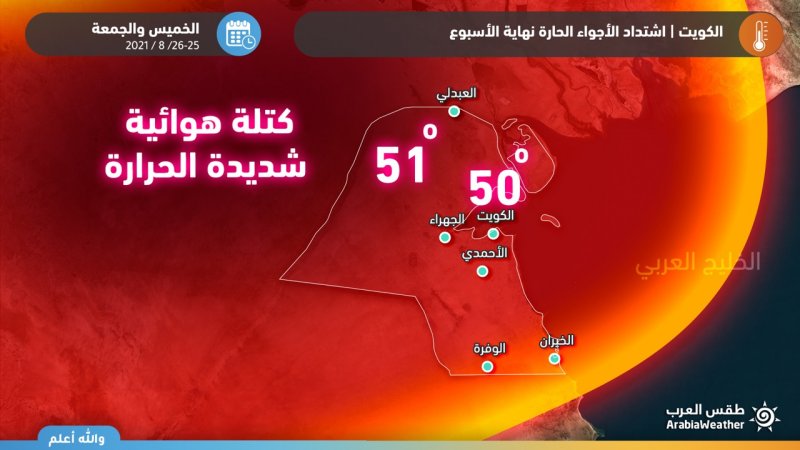 In conjunction with these hot and exhausting weather, the northwest winds are active on Thursday and are accompanied by strong gusts at times that raise dust and dust in many interior and desert areas. These winds are capable of forming dust waves, especially in desert areas.

These winds have many negative effects, especially on patients with respiratory system and eyes, as a result of raising dust and dust in a remarkable way, which requires them to follow the necessary precautions to prevent health complications, God forbid, and it also requires drivers to be careful while driving on the roads in case of low horizontal vision. by dust.

Reducing chances of rain in the Sultanate of Oman and Kuwait

As a result of the concentration of the atmospheric height in the northeastern part of the Arabian Peninsula, dry northern currents are blowing towards the northern regions of the Sultanate of Oman and the country, which works to reduce the opportunities for local formations on the mountainous heights, including the entire heights of the Hajar Mountains, especially on Friday and Saturday, in conjunction with that. The Khareef of Dhofar is noticeably active due to the increase in the intensity of the southwest monsoon winds.

As for the temperature, it is expected that the temperatures will tend to rise during the coming days, so that it will be forty in most of the interior regions, amid the prevailing of a very hot and exhausting atmosphere in all regions.

Hot weather in Bahrain and Qatar

It is expected that the hot and humid weather will continue to prevail in all regions in Bahrain and Qatar, with temperatures around 40 degrees Celsius in most of the interior regions, and the winds will be northerly humid, especially the coastal areas, turning to southeast in Bahrain on Saturday, active sometimes and causing light dust in the interior.

Weather and temperatures in the Gulf capitals on Friday 27/08/2021:

Riyadh | Moderate temperatures coincide with the activities of the Riyadh season, which are held at the end of the week