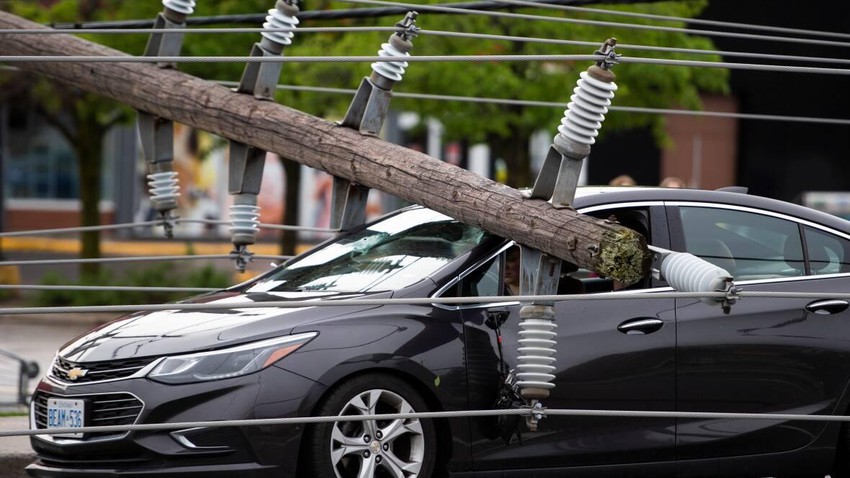 Weather of Arabia - A series of dangerous thunderstorms swept the southern Canadian province of Ontario on Saturday, killing at least 4 people, and causing severe damage to trees, power lines and buildings, and reports of overturned vehicles, as well as power outages for nearly 900,000 House in the provinces of Ontario and Quebec.

Watch the video, the strength of the storm and the extent of the damage it caused:

In the details: One person died and two others were injured after a tree fell on their camping trailer in Brant County, and a 70-year-old woman, who was walking during the storm, was killed by a tree falling, and to the north, in the federal capital Ottawa, a person died due to thunderstorms A woman in her fifties drowned when a boat capsized due to a storm, in a river separating Ottawa from Gatineau, in Quebec, Radio Canada quoted local police as saying.

Environment Canada issued a severe thunderstorm warning in several cities and towns, as severe storms swept through Toronto and most of southern Ontario on Saturday afternoon, with winds in some parts reaching 132 kilometers per hour at peak time.

The scientific reason for strong thunderstorms forming in Ontario

Experts in Arab weather point to the reason why strong thunderstorms usually form during the spring in some regions of the United States and Canada, as a result of the convergence of warm and humid air coming from the Gulf of Mexico with polar air coming from the north. This convergence results in severe cases of atmospheric instability and storms Strong thunderstorms with downward winds, and storms sometimes develop into tornadoes.