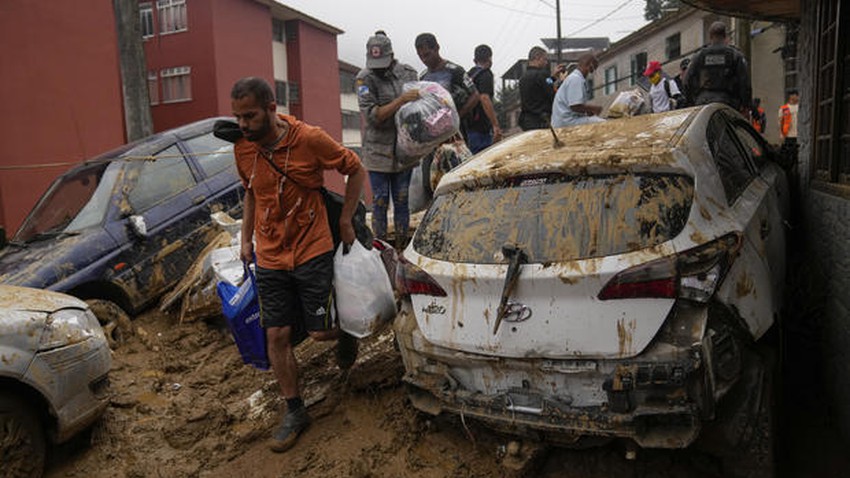 Weather of Arabia - a real disaster in the Brazilian city of Petropolis after heavy rain, as the government of the state of Rio de Janeiro in Brazil confirmed that the death toll from floods and mudslides that engulfed homes and cars had risen to 94, and the government did not provide a specific number of missing persons, as the number of missing persons is still of corpses stuck in the mud.

Footage spread on social media showed torrents sweeping cars and homes into the streets and water pouring across the city. One video showed two buses sinking into a swollen river as passengers climbed out of windows scrambling for safety, some swept out of sight.

On Wednesday morning, houses appeared buried under the mud, while appliances and cars were piled up in the streets.

The state fire department said 25.8 cm of rain fell within three hours on Tuesday — about as much as during the previous 30 days combined. The governor of Rio de Janeiro, Claudio Castro, said at a press conference that the rainfall was the worst in Petropolis since 1932.

"No one can predict rain like this," Castro said. According to meteorologists, more rain is expected during the rest of the week.” So far, nearly 400 people have been made homeless and 24 people have been pulled out alive.

The cause of the high death toll in Petropolis, Brazil

Petropolis, named after a former Brazilian emperor, was a haven for people escaping the summer heat and tourists eager to explore the so-called "imperial city".

Its prosperity also attracted residents from poor areas in the state of Rio de Janeiro, its population grew randomly, and the mountains became covered with small adjoining dwellings, many of them in areas unsuitable for building homes due to poor soil, especially after deforestation.

The stricken mountainous region has witnessed similar disasters in recent decades, among them a disaster that caused more than 900 deaths. In the years since, the Petropolis government has introduced a plan to reduce the risk of landslides, but the work has been progressing slowly. The plan, presented in 2017, was based on analysis that determined that 18% of the city's land is highly vulnerable to landslides and floods.

Local authorities say more than 180 residents living in vulnerable areas are sheltering in schools. More equipment and manpower is expected to assist in the rescue efforts on Thursday.

Since December, heavy rains have caused deadly floods and landslides in northeastern Brazil and São Paulo state, threatened to delay harvests in the country's western-central region, and briefly forced the suspension of mining operations in Minas Gerais.

Early warning: More powerful weather turbulence on parts of the coast of the Sea of Oman Thursday, heavy rain expected, and a warning of torrential rain