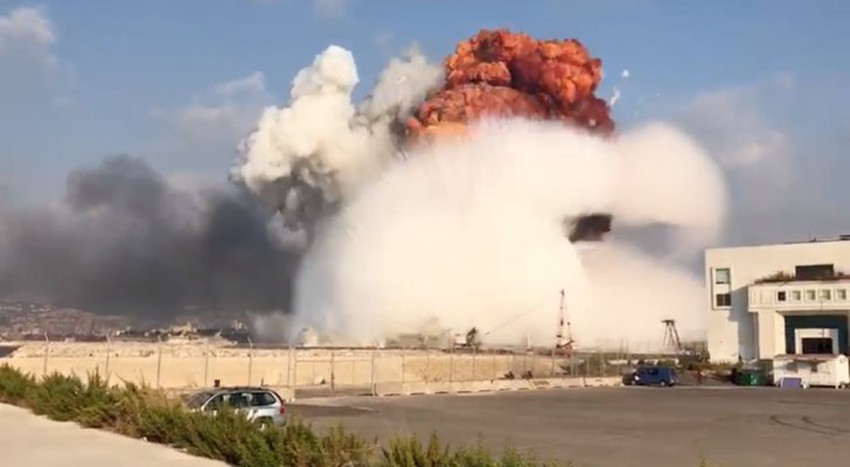 Beirut's huge explosion shows that `mushroom clouds` are not only related to nuclear explosions ... What is the cloud of mushrooms or mushrooms?

Weather of Arabia - A huge explosion rocked the port of Beirut, the capital of Lebanon, on Tuesday 4 August 2020, causing extensive damage to many buildings, injuring thousands, and killing dozens of people. Impressive footage of the disaster quickly spread on social media after the explosion, but this explosion was marked by the appearance of a "mushroom cloud" during it, which is also called the "nuclear cloud" as it is associated with huge explosions of nuclear weapons, such as the cloud that appeared in the Nagasaki explosion.

Reports indicate that the explosion was caused by a shipment of ammonium nitrate estimated at 2750 tons, which has been present for 6 years in a warehouse, so does the huge mushroom cloud form from other non-nuclear explosions or naturally, the following report answers this question.

What is the mushroom cloud or "mushroom" and is it caused by non-nuclear explosions or naturally?

The mushroom cloud or mushroom cloud is a characteristic mushroom-shaped cloud, consisting of debris, smoke, and condensed water vapor, usually caused by a large explosion.

The mushroom cloud is often associated with a nuclear explosion, but any sufficiently active detonation or ignition will result in the same effect and shape. It can be caused by strong conventional weapons, such as thermal weapons, and some volcanic eruptions and crash events may lead to the formation of mushroom clouds naturally.

To form a mushroom cloud, you need to suddenly release a large amount of heat, as this heat expands the air around the explosion to become less dense. Then the air quickly rises, leaving a large void around it, which in turn absorbs more air towards the heat source and warms it until it expands and rises. Small, accompanied by high smoke plumes and hot air, quickly cleaned on their own

But in some cases, if the air shaft is large enough or comes from a very specific source, the air in the center of the shaft is hotter than the air on the edges. So it will rise much faster than the edges, causing the edges to curve downwards to form fungus-shaped edges.

and sometimes . The air will fly or move inward toward the primary shaft, to reheat, and to rise again, resulting in a small central circular curvature. Since the atomic explosion is so massive, it is likely that it is more likely to form the fungus than small bursts.

Finally, and most exciting, is that in an atomic explosion or strong explosions, as happened in the Beirut explosion, the air rises much higher than any other explosion. As the hot air column created by the explosion will rise until it reaches a point in the atmosphere at which the surrounding air stops cooling and the rising column from the explosion begins to heat up. At a certain level of the atmosphere, ozone also makes its way to the column to raise the solar radiation absorbed by the ozone from the heat of this mixture. Suddenly, the air from the explosions becomes hotter or less dense than the environment around it, and instead of continuing to rise, it spreads with the surrounding air, forming a mushroom-shaped dome.

Various photos of the mushroom cloud or the nuclear cloud

A rising fungus cloud from the Redoubt volcano from an eruption on April 21, 1990

Mushroom cloud from atomic bombing of Nagasaki, Japan on August 9, 1945