Bilad al-Sham: After a good week.. Monitoring more winter depressions on their way to the region in the coming period 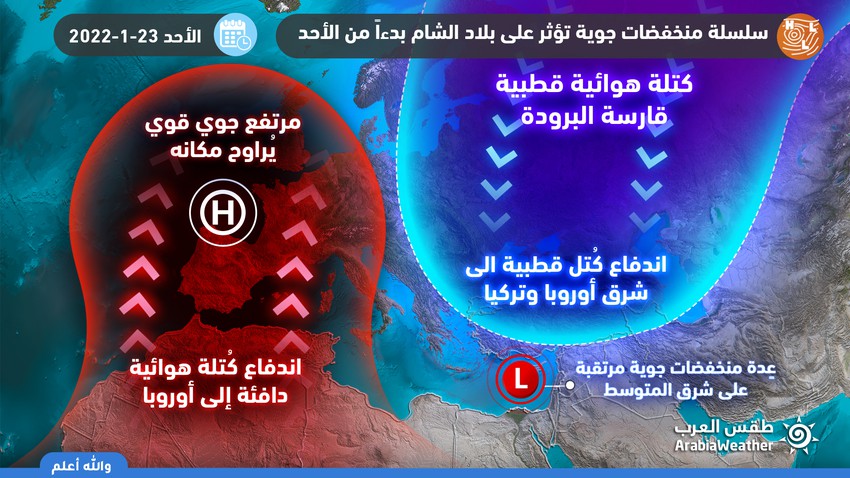 Weather of Arabia - The regions of the Levant and the eastern Mediterranean entered a distinct period of air activity from the middle of this month, following the concentration and positioning of an air altitude over large areas of the European continent, which led to the flow of a series of air masses of Siberian origin to the eastern Mediterranean, and their effects varied. Between strong waves of freezing, frost, rain and snow in other periods.

A new depression early next week

In the details, the outputs of the analyzes and the computer simulation data of weather forecasts indicate that the rest of the eastern Mediterranean countries are on a date with the impact of more than one air depression during the remainder of this month and extend their chances until the beginning of next February, God willing, which makes this period a period of time. Promising to improve the rain reality, which suffers from great weakness, especially in Jordan and Palestine.

According to the numerical simulation indicators of the atmosphere, another air depression will affect the region, God willing, at the beginning of the new week, specifically on Sunday and Monday 23 and January 24-2022, and it is expected that this depression will bring more rain to several and wide parts of the Levant, so that it is expected That the weather is very cold and fluctuating between partly cloudy and cloudy, and sporadic showers of rain are likely in several parts of the Levant, mixed with snow over the high mountainous heights, and accumulated over the tops of Lebanon and Syria.

The cadre of weather forecasts in Arab weather looks with optimism at the atmosphere of the end of next week, where, with the continued stability of the distribution of air masses and air systems from the Atlantic Ocean, the North Pole and the European continent, the latter of which is witnessing a rise in atmospheric pressure values, especially the western parts of it, an air mass of polar origin and severe The cold, from the north of the European continent, towards the Balkans, the Greek islands, and Turkey, and these last areas are the most important source of effective air depressions in the eastern basin of the Mediterranean, so that there is a continuous decrease in temperatures on Wednesday, becoming lower than their rates for this time of year by about 10 degrees Celsius, and the weather will be very cold and stormy with rain, God willing, in many areas.

According to the same data obtained by the "Arab Weather" center, the cold polar winds will be concentrated over the Balkan basin and western Turkey, and the arrival of this polar air mass to those areas may find the way paved in front of it to reach the eastern basin of the Mediterranean, including the Levant, God willing, and this may deepen The polar winds reach a level that allows for the occurrence of large-scale snowfalls that may affect the capitals of the Levant, but it is not possible to decide on snowfall from now, as the time distance is still far away.

Perhaps the progress and passage of time over the next two days will be sufficient to increase the probability or weight of a particular scenario at the expense of the other. Hand numerical values on weather maps, which will of course be reflected on the ground in this rainy season.

Indications of more depressions towards the area!!

In view of the continued presence of an air high over the eastern Atlantic Ocean and western European continent, and despite the long period of time at which weather forecasts are less accurate, the signals are also good and it is taken that the region will be on a date with more depressions, and it is not possible to deduce all the details from now on to those However, it is clear until the time of writing this report that the amounts of rain are expected to be excellent, God willing, and may be sufficient to restore the trajectory of the rainy season towards normal levels.