Bilad al-Sham: Monitoring the emergence of an air depression in the middle of next week 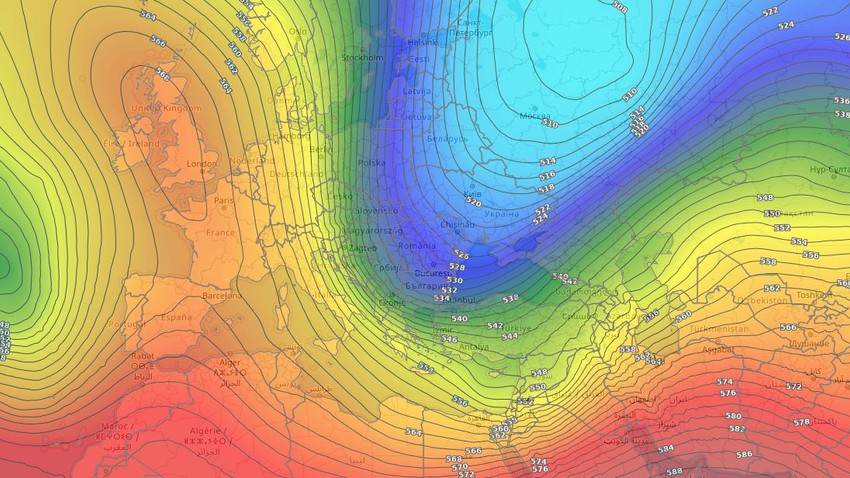 Weather of Arabia - The latest atmospheric readings of computer simulation models of the movement of air masses in the European continent and the Levant indicate indications that the rest of the countries of the eastern basin of the Mediterranean are affected by an air depression next Monday, coinciding with the beginning of the quadrangle.

Regarding the details, it is expected that an air rise attached to a warm air mass coming from Africa will rush towards the European continent, so that the high will extend its control over large parts of the west and southwest of the European continent, and the temperatures will rise there significantly, and this coincides with the rush of a polar and very cold air mass that pushes the high It descends to eastern and southeastern Europe and the Balkan Basin on Saturday 18-12-2021, and as a result an air depression is formed in the eastern region of the Mediterranean, affecting the Levant mostly on Monday.

And about the possibility of this depression being accompanied by snowfall, the latest data obtained by the Arab Weather Center indicates that the cold polar winds that will be concentrated over the Balkan basin will flow from a small part behind the depression to the Levant, and therefore the polar cold will not be enough to cause snowfalls in the main cities of the countries Levant, including all other Awashma.

The reason for the fact that the polar air of the Levant did not deepen is due to the poor concentration of the air altitude to the west, i.e. more than what is required of the European continent, in addition to the large cold mass east of the European continent, leading to the circulation of air attracted towards those blocks, preventing it from liberating and pushing it strongly towards the south, i.e. the eastern Mediterranean. .