Bilad Al-Sham: The release of details of the areas covered by the forecasts of precipitation and snowfall on Wednesday 01/19/2022 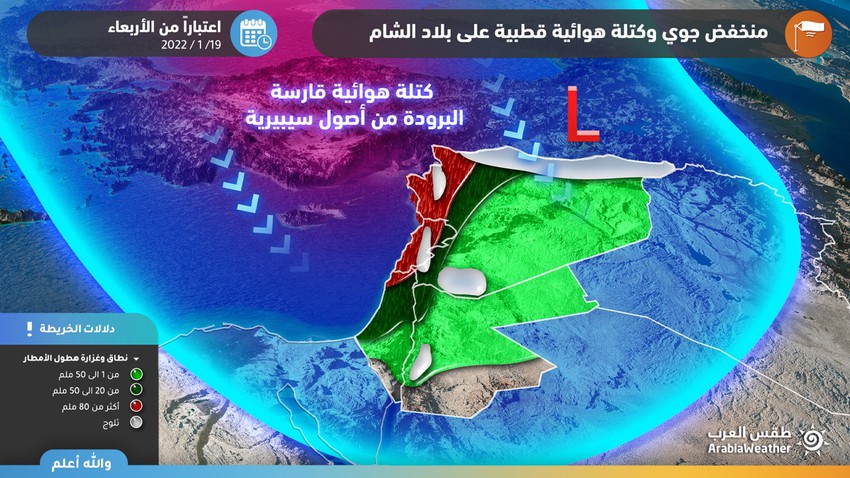 Arab Weather - A short while ago, the Weather Forecast Department at the Arab Weather Center released a report explaining the areas covered by the forecasts of precipitation and snowfall on Wednesday, and the report stated that the Levant will be affected on Wednesday, God willing, by an air depression accompanied by a cold air front, so that the weather gradually turns into very cold, stormy and cloudy With showers of rain, God willing, in most areas of the Levant, and subsequently the details of the weather.

The data that is received and processed within the corridors of the Arab Weather Center indicates that the cold air front gradually crosses Syria and Lebanon in the evening and night hours of Tuesday / Wednesday, so that the weather turns into very cold, stormy and cloudy with rain, God willing, in the Syrian coast in addition to the northwestern parts of Syria, With the chances of rain extending to all regions of Lebanon with the late hours of the night of Tuesday/Wednesday, and it is expected that the precipitation will be in the form of showers of hail and snow over the mountains that exceed 1400 meters, the level of snowfall decreases to heights of 1100 meters with the dawn hours, and some occurrences are not excluded. accumulations.

The latest analyzed weather readings at the Arab Weather Center indicate that the polar cold will be sufficiently penetrating on Wednesday morning inside Syria and Lebanon to cause intermittent snowfalls at intervals over areas with a height of more than 800 meters above sea level, which may accumulate to a limited extent in these areas. Extension of some snow showers at periods below this height, especially in the northern parts of Syria.

The report indicated that the depression will be concentrated on Wednesday morning over the Syrian territories, to start the cold front crossing Jordan and Palestine , and bring good amounts of rain, God willing, towards the northern and central regions, and later in the day on Wednesday towards parts of the southern region, and it is also expected that Precipitation is in the morning in the form of showers of hail and snow over the high mountain heights of more than 1000 meters above sea level in Palestine and Jordan and may extend below that height at intervals, and some accumulations are not excluded.

In the rest of the day, showers of rain continue, God willing, in northern and central Palestine and Jordan, in addition to parts of their south, sometimes mixed with snow over the tops of the heights, and then temporarily the level of snowfall rises to 1200 meters above sea level, km and the winds will be southwesterly to west. Active speed, with strong gusts at intervals, some of its gusts reach speeds of approximately 100 km/h.

At night, cold polar winds rush to the Levant behind the depression

The depression moves towards the east, and the weather becomes bitterly cold and fluctuating between partly cloudy and cloudy with showers of rain and hail at intervals in different and random parts of Lebanon and Syria, especially the southern parts of them, while snow falls over the mountainous heights whose height is more than 600 meters above sea level, and sometimes drops below that, and may also accumulate in a way that sometimes impedes walking on the roads in some areas subject to precipitation, and later during the night and gradually, a large-scale ice wave is expected in large parts of Syria and Lebanon.

Snow falls in Jordan and Palestine, but intermittently over the mountainous heights of more than 800 meters above sea level, and accumulates from time to time and the higher the height above sea level, and in the late hours of the night the chances of precipitation weaken, but this coincides with a further decrease in degrees Heat to cause a strong wave of ice and freezing over most areas, including external and internal roads.