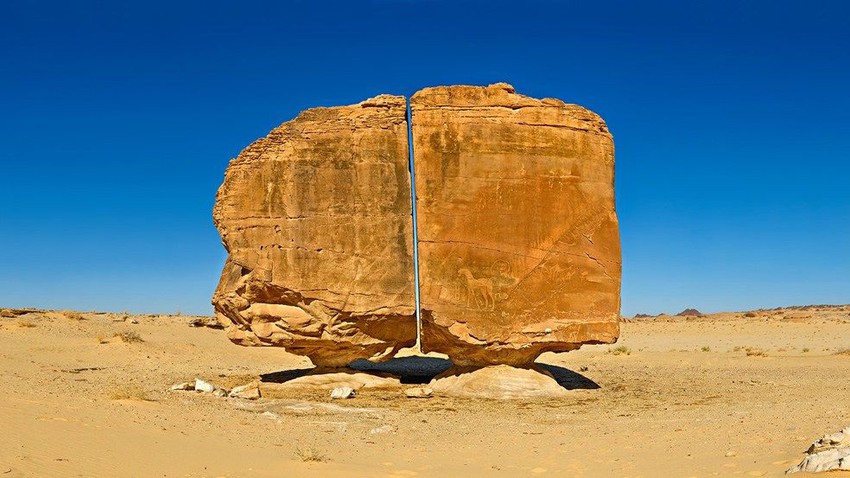 Arab Weather - There are many strange natural phenomena that amaze its visitors and show the greatness of God Almighty’s creation, and among these phenomena are the rock formations in the Kingdom of Saudi Arabia that hide geological mysteries that are still the subject of discussion to this day.

One of the most surprising mysteries is the blade rock, which is located in the Taima desert in Tabuk Governorate, northern Saudi Arabia, and which geology has been unable to decide on its matter, and science is still unable to give satisfactory answers that convince people and explain to them the causes and secrets of such phenomena.

Just by looking at the rock, you can see how amazing it is, that despite its huge size, it is still standing on small plinths with a perfectly straight line dividing the rock in the middle. What is the story of this strange rock formation?

How did the blade rock split into two parts?

The blade rock consists of lime, oily, and sandy materials, and is more than 4,000 years old. A perfect straight slit, so much so that some believe that this line was drawn using laser beams!

According to studies, more than a thousand years ago, the earth moved and caused this rock to split into two parts, but without causing its upturn, and there are scientists suggesting the theory of erosion of the middle part of the rock as a result of erosion factors and natural erosion due to the force of wind, rain and sand, and the crack may be due to a volcanic dam Minerals that then solidify before being shown to light.

And regardless of all scientific explanations, some believers in the conspiracy theory and few users of social networking sites did not hesitate to speculate that the ancient inhabitants of the Sahara used laser beams to cut "blade rock", and some of them even attributed this work to aliens!

Although the exact cause of this mysterious split remains unknown, it is definitely one of the greatest wonders of the world!

The Mysterious History of Blade Rock

According to the research conducted on this strange natural phenomenon, the area in which the rock is located was inhabited for more than a thousand years, as rock inscriptions were found engraved in some parts of the rock.

This part of the Saudi desert, which was previously an important place for trade routes, is still being studied in search of archaeological remains, and even today, people from all over the world travel to the Saudi province of Tabuk to see this rock and discover its secrets.

A question for mothers on Father's Day, can you give the father the freedom to share the responsibility for taking care of the young?