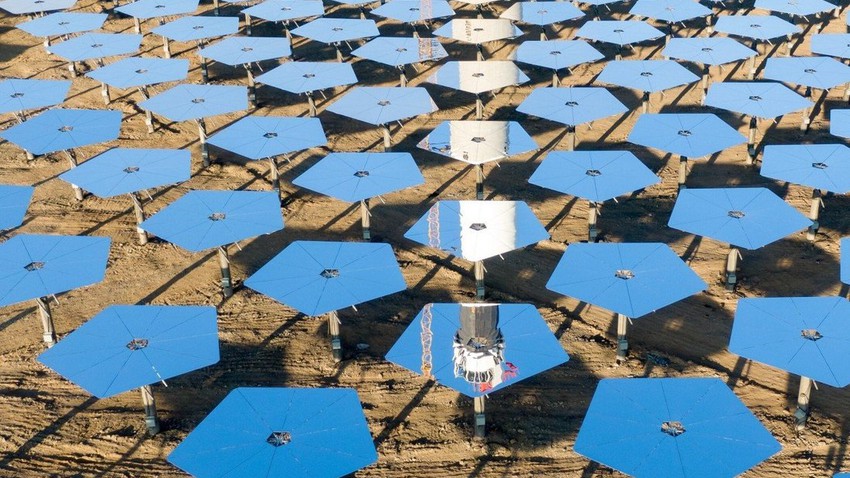 Weather of Arabia - China surprised the world by announcing a plan for a giant project that it started working on, which would lead to the provision of huge amounts of clean electricity at a low cost and without resulting in any pollution, provided that this energy is produced in outer space and then sent in huge quantities. to planet earth.

Once seen as science fiction, collecting energy from the sun and sending it to Earth is announcing its plan to put a 1 megawatt solar power plant in space by 2030, when construction will be completed by the end of this year.

Within a decade, the country's first-of-its-kind experimental facility will be used to test a revolutionary technology that allows China to send and receive a powerful beam of energy from space, according to scientists involved in the project.

By 2049, the total capacity of the plant or stations will be increased to (1) gigawatts, which is equivalent to the current largest nuclear reactor.

The reason the power plant was built in space, not on Earth

A solar power plant on Earth is not efficient because it only operates during the day, and the atmosphere reflects or absorbs nearly half of the solar energy.

Since the 1960s, some space scientists and engineers have been drawn to the idea of creating a solar station in space, at an altitude of 36,000 km or higher, where a geographically fixed solar power station could avoid Earth's shadow and see the sun 24 hours a day.

Energy losses in the atmosphere can also be minimized (about 2%) by transmitting energy in the form of high-frequency microwaves.

Over the past few decades, various forms of solar power plants have been proposed from around the world but they have remained theoretical due to major technical challenges.

Chinese researchers will first need to demonstrate that wireless power transmission works over a long distance . Although engineer and inventor Nikola Tesla popularized the idea in the late 19th century, the technology has been limited to only a small number of short-term applications, such as the wireless charger for smartphones.

The Chinese researchers have been able to receive radio energy emitted by a balloon 300 meters above the Earth's surface, and plan to increase the range to more than 20 kilometers by using a balloon that collects solar energy from the stratosphere.

According to some recent studies in China, the safety risks of the space solar power station cannot be neglected. When the massive solar panels rotate to chase the sun, they can produce small but continuous vibrations in the microwave radiation, which may cause a performance imbalance, so they need A highly advanced control system to maintain the concentration of radiation in a small spot on the Earth.

Another danger would be radiation . According to one calculation made by a research team at Beijing Jiaotong University last year, residents could not live within 5 kilometers from the ground receiving station of the Chinese 1 gigawatt solar power plant in space.

Even a train that is more than 10 kilometers away can encounter problems such as sudden loss of connection because the active microwave frequency will affect the Wi-Fi.

important | The National Center for Early Warning in the Sultanate of Oman issues report No. 2 on the rainy situation, `The Renaissance Trench`