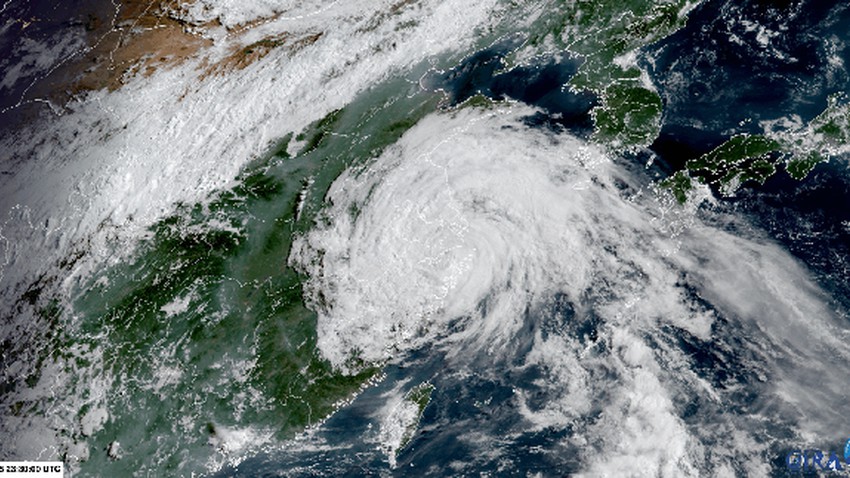 Arab weather - On Tuesday (July 27) the tropical depression "N-Fa" continued to hit eastern China in slow progress that increases the possibility of a disaster, and despite the weakening of the storm and the loss of winds some of their speed after reaching land on Sunday afternoon, the Its slow forward speed allowed the system to continuously unleash torrential rain, which exceeded 60 cm in some locations.

Major cities such as Shanghai, with a population of more than 25 million people, felt the blow of the storm, with winds of more than 93 km / h in Shanghai.

Due to the slow-moving nature of the storm, rainfall totals from En-Fa can become extreme. A patch of rain (300 to 600 cm) and up to (1,200 cm) is expected across Zhejiang and Jiangsu provinces. Rainfall of this kind can lead to life-threatening floods, mudslides, and other disasters.

The slow-moving nature of the storm is reminiscent of Hurricane Harvey, which hit Texas and slithered across the state with several days of heavy rain in August 2018, as more than 150 cm of rain inundated areas of northeastern Houston, leading to catastrophic flooding. 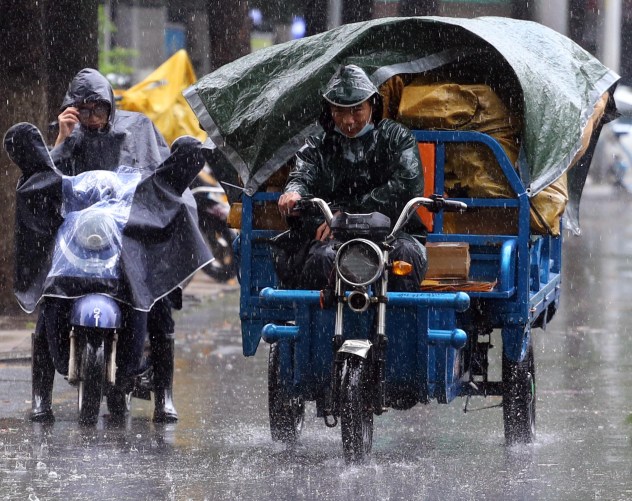 (A view of the streets amid wind and heavy rain in Nanjing, east China's Jiangsu Province, July 27, 2021 (Reuters)) 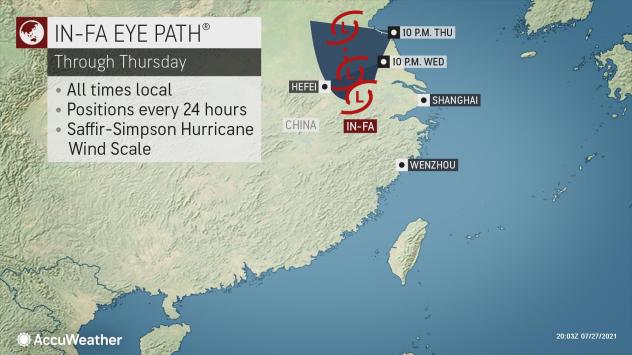 Storm En-Fa officially made landfall in the coastal area of ​​Zhoushan City, which is located in China's Zhejiang Province, at 12:30 p.m. Local time on Sunday afternoon. The storm's strength was then equivalent to a Category 1 hurricane over the Atlantic or eastern Pacific basins.

As the storm slowly moves inland during the early part of the week, wind intensity will continue to wane due to its friction with the ground. By Monday morning, the storm had lost its wind strength and had been downgraded from a hurricane to a severe tropical storm.

By Monday evening, the storm was classified as a tropical storm, and downgraded to a tropical depression on Tuesday.

,Due to the expected catastrophic effects of torrential rain, strong winds, and rough seas that can have severe economic impacts, In-Fa has been classified as a Category 5 storm on the AccuWeather RealImpact™ Hurricane Scale.

The AccuWeather RealImpact™ Hurricane Scale is a 6-grade scale, based on a wide range of important factors in contrast to the Saffir-Simpson Hurricane Wind Scale, which rates storms only by wind speed.

In order to convey a more comprehensive picture of a storm's potential impact on lives and better livelihoods, AccuWeather covers not only wind speed, but also flood rain, storm surge, economic damage and loss. 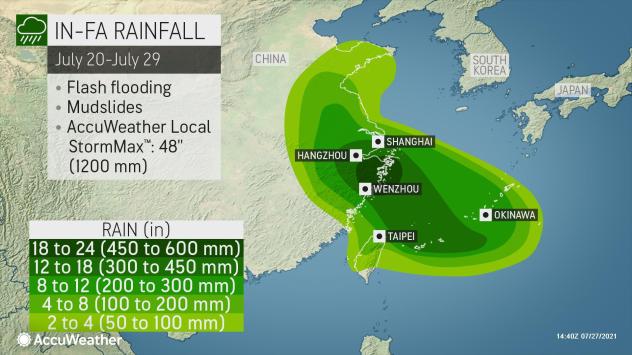 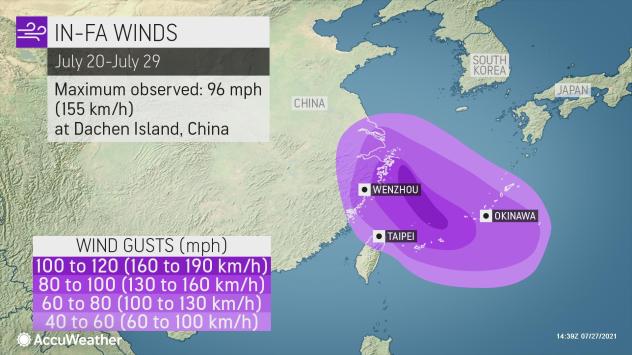 Forecast of the storm's path and potential impacts

As En-Fa rotates along China's east coast over the next few days, an area of ​​sinking air will grow inland to counterbalance the rising air associated with the storm. The inundated air will help bring drier conditions to Henan Province, which was inundated with historic rains and deadly floods last week, and the death toll from the catastrophic floods rose to 69 on Monday.

The western Pacific will remain active, with Tropical Storm Nepartak, which is expected to head towards Japan this week, as the storm has already caused disruptions and delays in the Tokyo Olympics. Heavy rain is likely to occur across northern Japan. There may be a development of an additional tropical system later this week or next weekend in southern Japan.