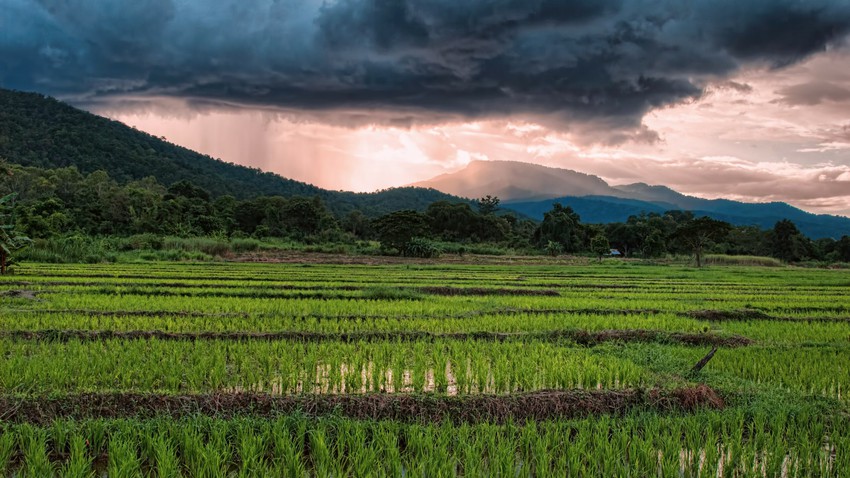 Weather of Arabia - A new study revealed that parts of East Asia could witness the formation of "atmospheric rivers" due to climate change, which leads to record levels of precipitation with it.

"Atmospheric rivers" is a term used to describe long, narrow trails of condensing water vapor. These narrow paths of concentrated moisture in the atmosphere can quickly cause flooding when they hit a barrier such as a mountain range, releasing huge amounts of water in a short period of time.

According to models created by scientists to investigate the behavior of atmospheric rivers and extreme precipitation in East Asia under different consequences of climate change, precipitation events in East Asia will be more frequent and more intense in the coming decades as the planet warms. More water will be carried through the air, and more rain will fall on the ground.

Scientists conducted this study after East Asia experienced very heavy rains in July 2018 and July 2020 due to atmospheric rivers.

To understand the effect, the team used high-resolution simulations of global atmospheric cycles that virtually recreate the conditions in the atmosphere.

They looked at other regional climate models, and compared simulations based on real meteorological data from 1951 to 2010 with forecasts for 2090.

The authors used a climate scenario that would result in 7.2°F (4°C) of warming, compared to pre-industrial levels, well above the 3.6°F (2°C) target set as part of the Paris climate agreement.

Scientists from the University of Tsukuba in Japan found that if temperatures rise by 4 degrees Celsius, in the worst-case scenario, atmospheric rivers will be strengthened, leading to unprecedented record levels of precipitation across East Asia.

Although they only looked at East Asia, the team says their predictions will also apply to mid-latitudes with steep mountain ranges, including Europe and North America.

Creating simulations based on different outcomes of climate change allows scientists to predict the impact of different weather events as the world warms.

The Japanese team says they have already seen clear signs of global warming hitting parts of the country, so they wanted to know how things could go wrong.

"It is becoming more and more evident that global warming means more than just rising temperatures," they wrote.

Extreme events, such as torrential rains, floods and heat waves, are becoming more frequent and intense around the world.

The scientists cautioned that this "creates an urgent need to anticipate and prepare for these changes" in the future, when discussing the need for their work.

One particularly destructive extreme weather event is an increase in precipitation to unexpected and unprecedented levels, which can lead to flooding.

To help predict rainfall events, scientists looked at one cause: the interaction of atmospheric rivers with mountain ranges.

The team explained: "As the name suggests, atmospheric rivers are long, narrow bands of concentrated water vapor that flow through the atmosphere. When one of these bands meets a barrier, such as a mountain range, it can produce extreme levels of rain or snowfall." .

In simulations, the largest amounts of atmospheric river-related precipitation occurred on the southern and western slopes of mountains in East Asia, including Japan, the Korean Peninsula, Taiwan and northeastern China.

The greatest rainfall will be on the southwestern slopes of the Japanese Alps.

The study was restricted to East Asia due to computer time and processing limitations, but they expected it would apply to other regions around the world.

Prof. Kamai explained: “Our results are likely to be applicable also in other mid-latitude regions where interactions between atmospheric rivers and steep mountains play a major role in precipitation, such as in western North America and Europe. These regions may also be exposed to extreme precipitation. Severe precipitation becomes more frequent and intense as the climate warms.

The results of the study were published in detail in the journal Geophysical Research Letters.