Collapses and floods in a historic disaster in northern India 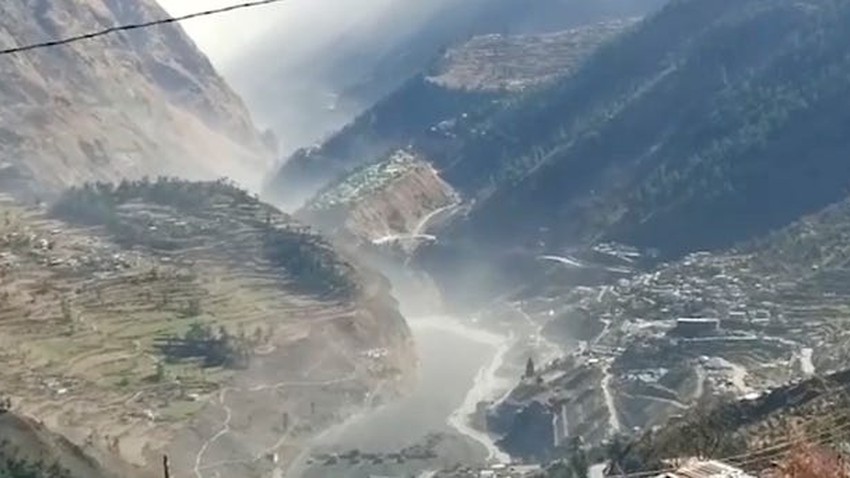 Weather of Arabia - North India was hit yesterday, Sunday, by a disaster, as a result of which at least 180 people were lost and 19 people died, after a part of a glacier fell in the Himalayas, which led to a devastating avalanche and a huge flow of water, dust and rocks towards the bottom of a corridor Tightness between the mountains, until the collapses led to the breaking of a dam in the hydropower project before it moved downstream and bulldozed buildings, trees and people, in addition to about 2,500 people in 13 villages isolated by flash floods, and most of these villages are remote between the mountains, which makes it difficult for rescue teams to get it.

Rescue teams worked overnight to find survivors trapped under the rubble, as most of the missing were workers from two hydroelectric projects in the Chamuli district of Uttarakhand, where rescue teams' efforts focused on removing sludge and debris from a tunnel in the state-owned hydropower project. Around 30 to 35 workers are thought to be trapped there, and teams have managed to dig up to 150 meters into the 2.5-kilometer-long tunnel, but the sheer volume of debris slowed the advance.

The magnitude of the resulting damage

This horrific disaster caused great loss of human life and infrastructure, most of the destruction focused on two hydroelectric projects, one of which is the Rishijanga Power project - a small 13.2 megawatt dam - which was completely washed away in the floods that occurred after 10 am very quickly when a piece of Nanda Devi Glacier, triggering torrential flow in the valley of the Dauli Ganga River more than 500 km north of New Delhi, rising water levels have prompted authorities to issue urgent evacuation notices for people living further on the Alakananda River.

Floods in the valley also caused severe damage to another hydropower project, which is a larger project with a capacity of 520 megawatts and is located about 5 kilometers from the other project, where about 176 workers were working on the project, which contains two tunnels, a number of workers are still trapped in them.

The environmentally sensitive Himalaya region is exposed to floods, landslides and melting glaciers due to global warming resulting from climate change, as melting ice leads to the disintegration of glaciers, which leads to the rush of trapped water behind them and form floods, a study conducted in 2019 found that the glaciers in the Himalayas It is melting twice as fast than last century, losing nearly half a meter of ice every year .

Others pointed out that the reason for the changes is the increase in construction and development projects, as the region has witnessed in recent years an increasing number of hydroelectric dams, infrastructure projects and roads connecting them, while environmentalists have long warned that development projects in the Himalaya state expose the region to a disaster. Impending environmental, as the authorities described the landslide that occurred on Sunday as a rare event, it has happened once in the past similar disaster in 2013, when the state was hit by massive collapses of the Himalayas, and floods, about 6000 people lost their lives because of them.

While experts say that it is too early to conclude the cause of this avalanche, they have shown that global warming caused by human activity plays a role, and that the disaster is an event resulting from climate change, the retreat of glaciers and the melting of ice due to global warming, and perhaps climate change To increase the scale of natural disasters.

However, matters should be discussed regarding the type of projects being built, and an assessment of the extent of the damage they will cause to the environment.