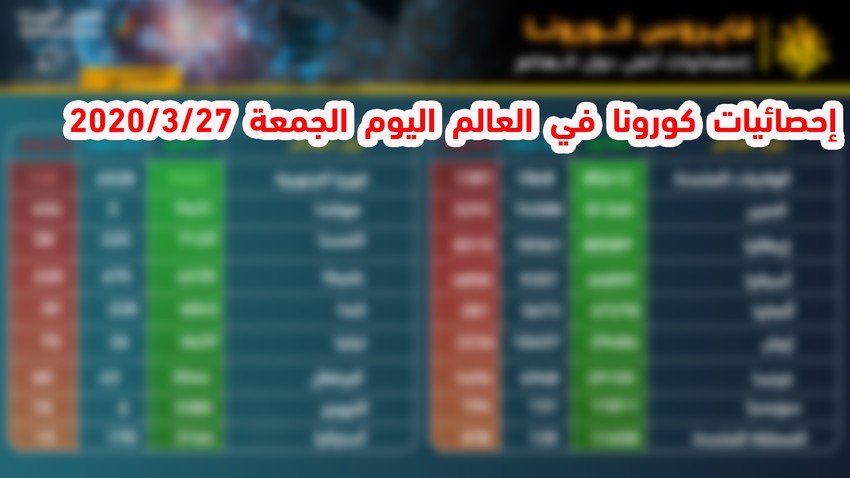 Arab Weather - The United States of America has become the country with the highest number of confirmed cases of the emerging coronavirus in the world, and the United States, with a population of 300 million, registered 81,311 infections, exceeding the number of infections in China and Italy.

The numbers of people who have recovered from the Coruna virus continue to rise in the world, according to the latest statistics today, so that the number of healing cases reached more than 125,297 , while the number of people infected with the emerging virus around the world reached more than half a million infected. As for the death statistic around the world, it reached 24,293 deaths.

Italy is still heading the countries of the world with the highest deaths, as it reached 8215 this morning.

As for China, it ranked first with the number of recovery cases, which reached 74051 cases this morning.

And Spain recorded the highest rate of infection today, Friday, at 6273 new cases, a high rate.

Spain also recorded the highest new death rate with a total of 769 in the past 24 hours.

Here are some news about countries associated with the emerging virus, from around the world. Today, Friday, 3/27/2020:

And the latest statistics in numbers, you will find infographics for the top 18 countries in the world today, Friday 3/27/2020:

Wrong eating habits we practice in the summer

What is the difference between the beginning of summer in meteorology and its astronomical start?

A new tropical state is forming in the southeastern Arabian Sea

Habits to avoid in the summer for your health