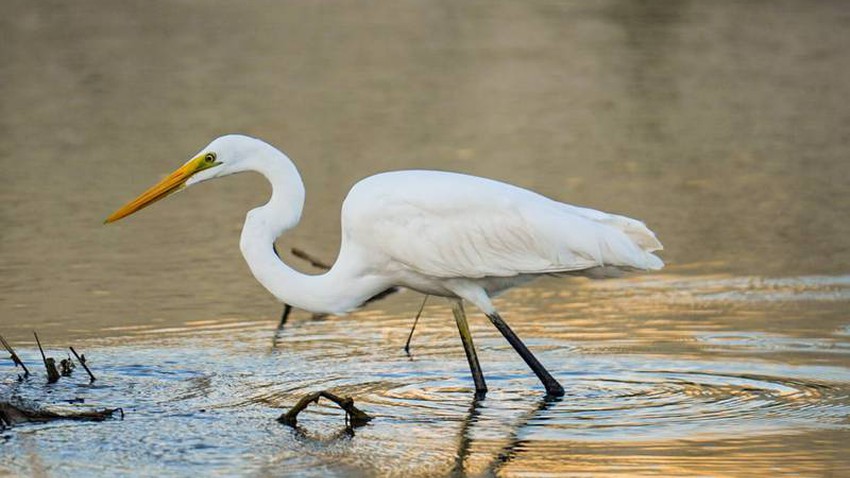 Arab weather - Almost 20 days have passed since Hurricane Shaheen, which hit the northern coasts of the Sultanate of Oman, destroying many properties and prompting people to evacuate their homes to safer places, but the devastating storm left a pleasant surprise in its wake, a rare visit for a number of birds that do not visit the country Usually!

Vast tracts of land that were usually dry, are now filled with water, attracting different types of birds to the hardest hit parts of Oman, a sight that nature lovers happiest and a pleasant surprise left by Cyclone Shaheen, where the white cranes, Ospreys, geese, and flamingos row the waters.

“The empty wastelands are now rivers and lakes, due to the recent floods,” Shahid Maktoob, a nature enthusiast in Suwaiq, told The National. "We see unusual landings of different types of birds in our area, on the water left by storms, species that we do not usually see at any time."

What happened is that the migratory birds that escape the cold weather and usually fly from Iran to India via Oman, this time stopped in the Al Batinah region.

At this time of year, these birds fly away from Iran as the temperature gets cooler there, to the warmer climes of India, but this time, due to the pools of water left by the storms, they made landfall in the Batinah regions.

Most of the damage occurred in the Al Batinah region of the Sultanate of Oman, in the towns of Al Musanah, Al Suwaiq, Saham, Al Khaboura and Sohar, which were hit by winds of 60 knots and waves 12 meters high.

“I spotted white cranes, geese and even flamingos on my usual evening walk in these flooded areas,” Hashem Al-Saleh, a bird watcher from the Saham region, told The National. He added, "It is not unusual to see these types of birds flying at any time here in Al Batinah. The floods destroyed our homes but brought beautiful birds to the area."

Faisal Al Mousa, another bird watcher, said he usually sees predatory birds like hawks and eagles in the desert of Oman, and they stay in the desert looking for foxes, rabbits and rats to eat, but this time, we have different foreign birds and that is something really special for bird watchers like us.

(The black heron and the warbler in the cities of Al Batinah. Photo: Saleh Al Shaibani/The National newspaper)

It is noteworthy that due to Cyclone Shaheen, more than 5,000 flood-affected people were relocated to temporary housing, but most of them have now returned to their homes. The storms have killed 12 people in Oman and two fishermen in Iran.

Thousands of volunteers help restore storm-devastated towns. The government said it would build 328 homes for families whose homes were destroyed by floods.