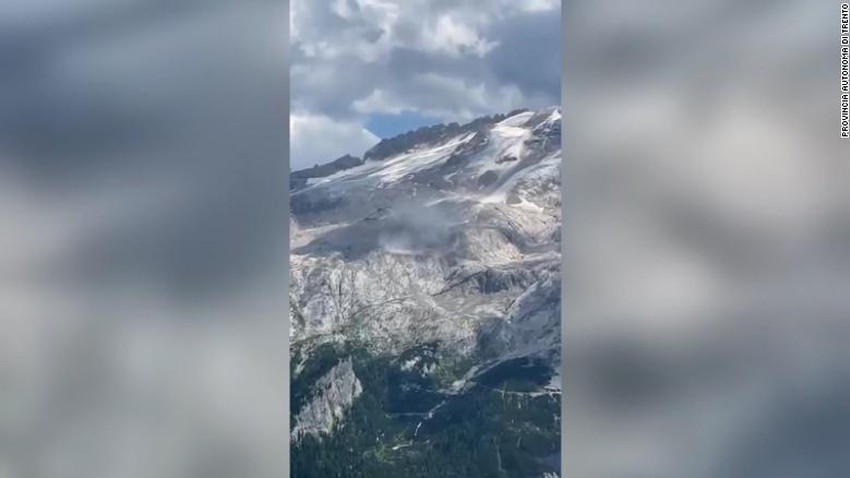 Arab weather - At least six people were killed after they were trapped in an avalanche in the Alps mountains in northern Italy, on Sunday, and nine others were injured, two of whom were seriously injured.

Nine injured survivors were found and transported by helicopter to hospitals in northeastern Italy, while rescuers continue their search for survivors using thermal drones to try to determine body temperature among the snow, where 19 people are still missing, with chances of survival dwindling. It survives in such conditions for a long period of time.

In detail, parts of a glacier collapsed in Marmolada, the highest mountain in the Italian Dolomites. In the Alps, amid record temperatures, a large boulder crashed Sunday, sending ice and boulders onto a popular hiking trail.

It remains unclear how many people may have been hiking at the summit of the Marmolada and their fate is unknown. Sixteen cars remained unclaimed in the area's parking lot.

Four victims were identified on Monday, three Italians, including two Alpine guides, and one from the Czech Republic, the AGI news agency reported, citing rescue workers. Take it out safely from the mountain.

An unusual rise in temperature at the mountain peak

It wasn't immediately known what caused the iceberg's top to break and crash down the slope at a speed experts estimated at around 300 km/h, but the main factor is thought to be a heat wave that led to unusually high temperatures at the start of summer at high altitudes in the Alps.

The disaster occurred one day after a record high temperature was recorded, as the temperature rose unusually late last week on the top of Italy's largest glacier, which is 3,300 meters high, to exceed 10 degrees Celsius, well above average.

According to Massimo Frisotti, a science professor at Rome Tre University, the avalanche was caused by unusually warm weather linked to global warming, with precipitation reduced by 40% - 50% during the winter.

You may also be interested in: Milan's fountains closed in Italy to face one of the country's worst droughts

Jacopo Gabrielli, a polar science researcher at Italy's National Research Council, noted that the long heat wave, which lasted through May and June, was the hottest in northern Italy in that period in nearly 20 years.

It is reported that the glacier, in the Marmolada range, which is the largest in the Dolomites in northeastern Italy, has recorded an acceleration in its rate of melting over the past decades, which has reduced a large part of its size, and experts at CNR estimated two years ago that it is likely to disappear Glacier in 25-30 years.

You may also be interested in: What are the causes of global warming and climate change.. and what are the possible consequences