Dead and injured in the violent earthquake that struck Japan yesterday.. and terrifying scenes monitor what happened at the time of the earthquake 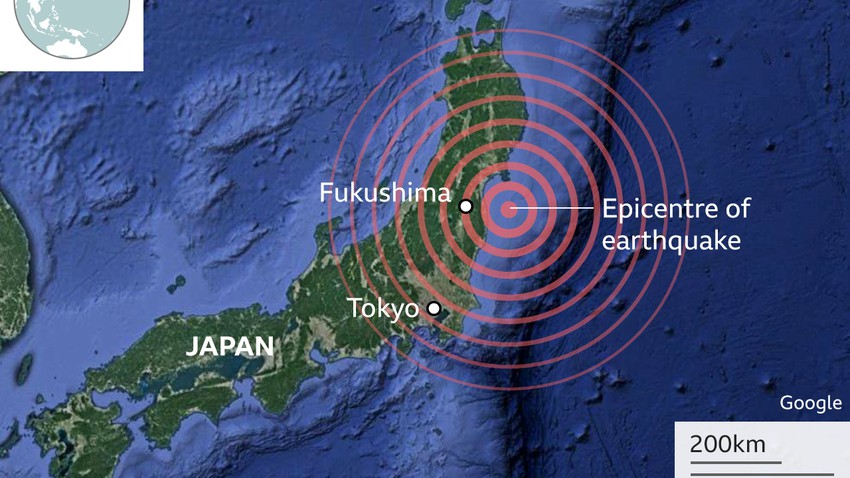 Arab Weather - Crash and destruction witnessed by the residents of Fukushima and Miyagi yesterday evening, Wednesday, in the wake of a violent earthquake measuring 7.4 degrees on the Richter scale that hit the coasts of northern Japan, killing 4 people and injuring 107 others, smashing furniture and causing power outages in more than two million homes.

The area is a part of northern Japan that was devastated by a deadly magnitude 9 earthquake and tsunami in 2011, which also led to the collapse of a nuclear plant, releasing massive radiation that still makes some parts uninhabitable.

At the store on the 2nd floor of the building in the restaurant area of Fukushima City where the shaking.
Massive #earthquake hit #Japan . #地震#日本#津波#earthquake #japan #Tsunami pic.twitter.com/ehGgmOLibH

A #earthquake has hit north-east #Japan , cutting power to two powerful million homes and prompting a tsunami advisory for parts of the coast. The magnitude 7.3 tremor struck the same region where a major quake triggered the Fukushima nuclear disaster, 11 years ago. pic.twitter.com/rUNQ1LpNfq

On Thursday, the Japan Meteorological Agency raised a low-risk tsunami warning of a tsunami along the coasts of Fukushima and Miyagi Prefectures, and tsunami waves of 30 cm high reached the shore in Ishinomaki, about 390 km northeast of Tokyo.

The authority raised the earthquake's strength to 7.4 from 7.3 in the beginning, and adjusted the depth from 60 km below sea level to 56 km.

Tokyo Electric Power Holding Co., which operates the Fukushima Daiichi nuclear plant, where cooling systems failed after the 2011 disaster, said Thursday that workers at the site, which is being decommissioned, found that some tanks containing treated radioactive water were out of place due to vibration. , and what could be a steel column fell from the roof of reactor building No. 4, which has no fuel inside.

More than 2.2 million homes in 14 prefectures, including the Tokyo area, were without power, but power had been restored in most places by morning, except for about 37,000 homes in the hardest-hit Fukushima and Miyagi prefectures, according to Tohoku Electric Power Corporation, which supplies electricity to the district. .

Japan is located in the Pacific "Ring of Fire", where intense seismic activity is recorded, extending from Southeast Asia and across the Pacific basin.

The country witnesses frequent earthquakes, which prompted it to impose strict building rules in order to ensure the ability of buildings to withstand strong tremors.

These are scenes of some of the effects of destruction in the affected areas:

In the video taken of the #Tohoku Expressway in #Shiroishi City, Miyagi Prefecture after 7 am on the 17th, you can see that there is a big #crack in the road surface after Massive #earthquake hit #Japan . #JapanQuake #tsunami pic.twitter.com/Vg2gkzTAYW

In the video Kunimi Town, #Fukushima Prefecture around 8 am, you can see a large broken building after #earthquake
The roof of the building has #collapsed and the tiles are scattered. #Tsunami #Japan #Earthquakejapan pic.twitter.com/X3vUaaH0QA

Early warning: More powerful weather turbulence on parts of the coast of the Sea of Oman Thursday, heavy rain expected, and a warning of torrential rain