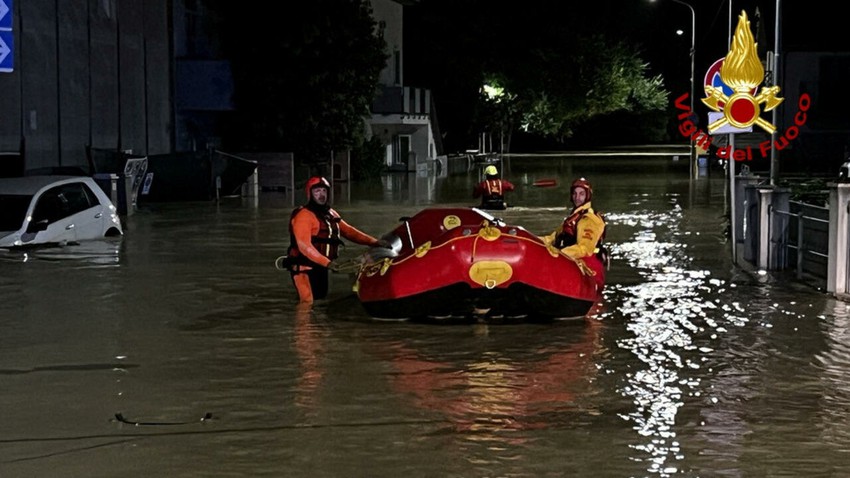 Weather of Arabia - At least ten people were killed in flash floods in the Marche region in central Italy on Thursday evening, while rescuers continue to search for 4 missing persons, including a mother and daughter.

The Marche region of central Italy saw nearly 400 millimeters of rain in the space of two to three hours on Thursday night. This flooded the streets of many towns around Ancona, the capital of the region on the Adriatic coast.

Ludovico Caverni, Mayor of Serra Santa Bondio, told Italian radio and television that the event "was like an earthquake".

Stefano Agutzi, head of civil protection in the Marche regional administration, said the rains were much stronger than expected. "We received a normal warning of rain, but no one expected anything like this," he added.

The event saw residents scramble frantically on rooftops and trees as torrential rain swept cars away.

Among the dead were a man and his son, who were found dead in their flooded garage as they tried to escape in their car. Another resident died while trying to escape on his motorbike while a fourth man was found dead in his car. Powerful torrents pulled a boy from the arms of his rescued mother. About 50 people were treated at the hospital for multiple injuries.

Footage released by emergency teams showed rescuers on rafts trying to evacuate people in the coastal town of Senigallia, while others were trying to clear debris from a tunnel, where about 300 firefighters are taking part in the rescue efforts.

Italian police said some villages were cut off and many roads were closed as a result of the severe weather that had left havoc.

The cause of the catastrophic floods in Italy

Paola Pino d'Astori, an expert with the Italian Society of Environmental Geology (SIGEA), said the floods were the result of climate change.

This year, Italy experienced an unusually hot and dry summer, leaving the land in the coastal region dry and unable to absorb the amount of torrential rain.

Although rain is expected in the area, local officials say the flash floods that followed took everyone by surprise.

You may also be interested in: The drying up of rivers in Europe and Asia reveals secrets and treasures that were hidden under the water

Meteorological officials said the severity of the flooding was explained by a combination of two things: unusually hot temperatures in September, and persistent drought during the summer.

The heat meant that the sea was much warmer than usual at this time of year which increased the humidity in the air. And when the storm releases moisture in the form of rain, a severe summer drought meant the ground was too dry to absorb the falling water quickly enough.

Watch also: video | This is a simple experiment that explains why flash floods occur when it rains after a dry period