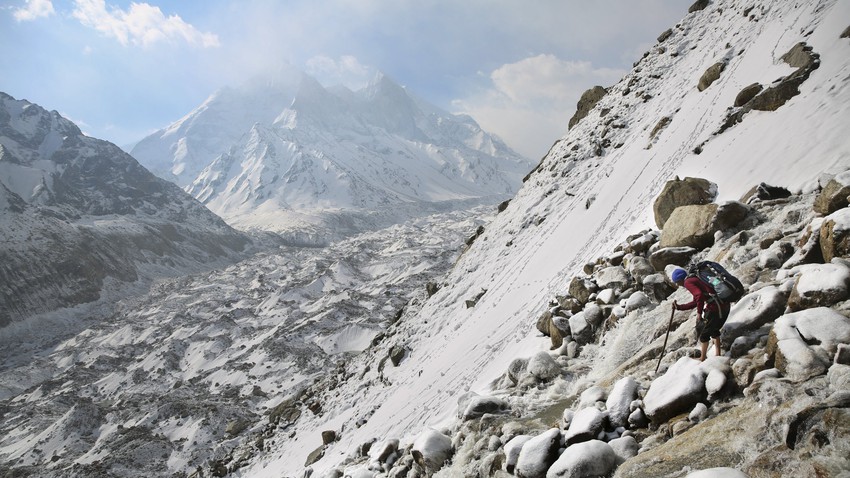 Weather of Arabia - Indian security sources reported today, Wednesday, that at least 10 people were killed in an avalanche on the Indian side of the Himalayas.

In its latest toll, the Indian police said that at least 10 people were killed in the Himalayas, while 18 people are still missing, after an avalanche hit a group of mountaineers.

This group includes 34 students from the local Nehru Mountaineering Institute, as well as 7 coaches and a nurse, according to AFP.

On Tuesday, 4 of them were confirmed dead, as a result of the avalanche that occurred near the top of Drupadi Ka Danda 2 mountain at an altitude of 4,880 meters in the northern state of Uttarakhand.

The search operations resumed Wednesday after stopping on Tuesday evening due to bad weather, according to the French agency.

"Rescue teams have recovered 10 bodies," the Uttarakhand state police said on Twitter, noting that 14 people had been rescued, including 5 who were receiving treatment in a hospital in the neighboring district of Uttarkashi.

Footage filmed by the police showed some survivors walking to the area accompanied by two policemen.

Uttarakhand Chief Minister Pushkar Singh Damy confirmed via Twitter that experienced mountaineer Savita Kanswal, a member of the coaching team, was among the dead.

It is noteworthy that Kanswal managed during this year to reach the summit of Mount Everest and the nearby Mount McCullough in just 16 days, in a record number recorded among mountaineers.

A spokesman for the national agency responsible for disaster management, Redim Agrawal, told AFP that climbers were stuck in an ice crevice after the avalanche.

In August, the body of a mountaineer was found two months after he fell into an ice crevice while crossing a glacier in Himachal Pradesh, another state in northern India.

Also, last week, the body of American mountaineer Hilary Nelson was found in the Himalayas, two days after she disappeared on the slopes of Mount Manaslu in Nepal.

And Nelson slipped while skiing off the eighth highest mountain in the world, after reaching the summit with her partner Jim Morrison.

On the day of her disappearance, an avalanche occurred between Camps 3 and 4 in Manaslu, killing a Nepalese climber and injuring dozens of people, according to the state tourism department.

Despite the absence of necessary studies to determine the impact of climate change on the Himalayas, climbers noticed that the glacial cracks widened and the water areas increased in areas that were previously covered with snow, in addition to the increase in the number of glacial lakes.

Watch also: video | Dead and injured in an avalanche in the Italian Alps, amid unusually high temperatures