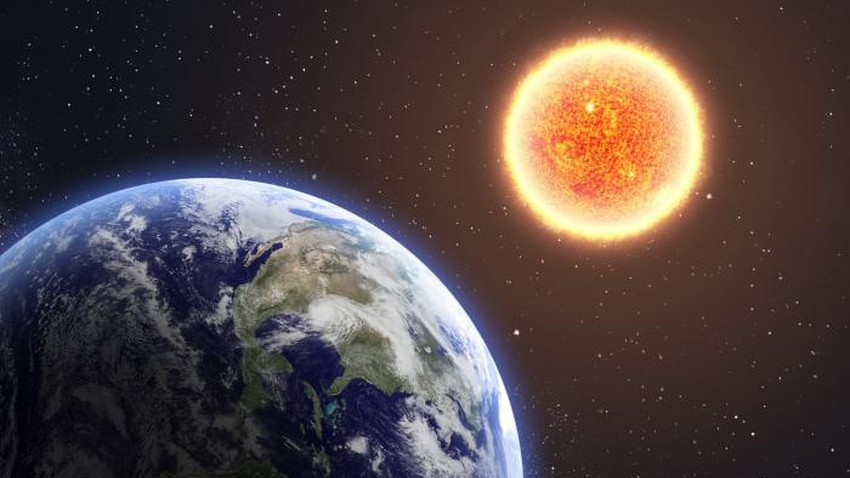 Arab weather - the earth revolves around the sun in a semi-circle (oval), and the sun is not located in the center, so there is a day in the year when the earth is as close as possible to the sun, and another day when the earth is at the farthest point from the sun, so what is the effect of that? Does this have anything to do with the weather and the seasons?

On Monday (July 4) the Earth crosses at its farthest point from the sun at 5:10 pm Mecca time, this farthest distance between the earth and the sun is called the point of "aphelion" or the phenomenon of "aphelion", a Greek word that originated from the two syllables "apo" meaning far and "helios" meaning sun.

The closest and farthest point to the Earth from the Sun

Because of the shape of the Earth’s orbit and the position of the Sun, the distance between the Earth and the Sun varies throughout the year, so that the Earth reaches its farthest place from the Sun at the “aphelion” point, in early July, while the Sun is closest to the Earth at a point The perihelion is in early January, when the Earth is about 3% (about 5 million km) closer to the sun than it is at its aphelion. 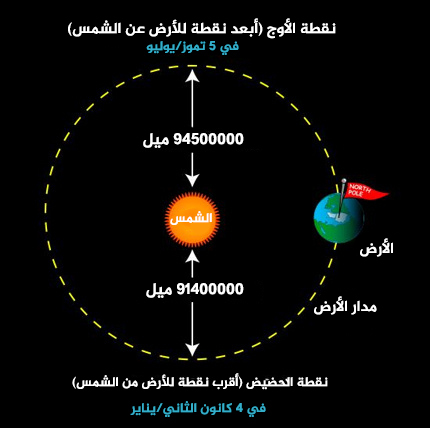 (Illustration of the sun and the Earth's orbit, the difference in the distance between the Earth and the sun during aphelion and perihelion, the Earth is slightly farther from the sun at aphelion in July)

Does the ephelion phenomenon have an impact on our weather?

It is reasonable to assume that the weather will be less hot when the Earth is at aphelion, but the difference in the amount of sun energy we receive is not significantly different between perihelion and aphelion, and the difference in distance between perihelion and aphelion is only about 4.8 million km (3 million miles), which is A small fraction of the average distance between the Sun and Earth of 150 million km (93 million miles).

The value of the solar constant varies by only 3.5% due to the little difference in the Earth's dimension, whereas if the Earth's orbit were more elliptical and more elongated, the difference in temperature between aphelion and perihelion would be large.

For example, the asteroid named "1566 Icarus" moves along a very elongated orbit reaching a maximum distance of 185 million miles and then to a distance of at least 16.75 million miles, when Icarus is at or near perihelion, heated by the sun's heat as if It's baked in the oven, and when it's away, it freezes well below zero.

Conversely, one would think that the summer in the southern hemisphere might be a little warmer, because the Earth is at perihelion (early January), in fact the southern hemisphere is mostly water (the land/water ratio is 11/4). Water has a higher heat capacity than the earth, which means that it requires more thermal energy to increase its temperature than the earth does. Thus, the small increase in the solar constant is offset by the increase in the area of water bodies relative to the land, and therefore there is no significant increase in temperatures.

While the Earth's average temperature is about (2.3 degrees Celsius) higher at apogee than it is at perihelion, this is because the Northern Hemisphere has more land, which heats up more easily and faster than the oceans. ( Source )

Thus, the tight balance appears in the creation and management of the universe. Glory to God the Creator!

The way aphelion affects our weather is the duration. The earth is far from the sun in summer. Therefore, its orbital speed is at its lowest and requires more time to travel from the point of the summer solstice to the autumnal equinox than it does to move between the winter solstice and the vernal equinox. Winter is about 89 days. Summer is about 94 days long.

Illustration representing the elliptical orbit of the Earth, the equinoxes and solstices along the orbit, as well as the apogee and perihelion, and periods representing when the seasons occur during the Earth's orbit around the sun)

Number of summer days for this year 2022

The Earth's orbit is not the reason for the different seasons

Although the Earth's semi-circular orbit causes a difference in the Earth's distance from the Sun, it is not the reason for the existence of winter and summer on Earth, but rather the tilt of the Earth's axis during its rotation that causes the seasons.