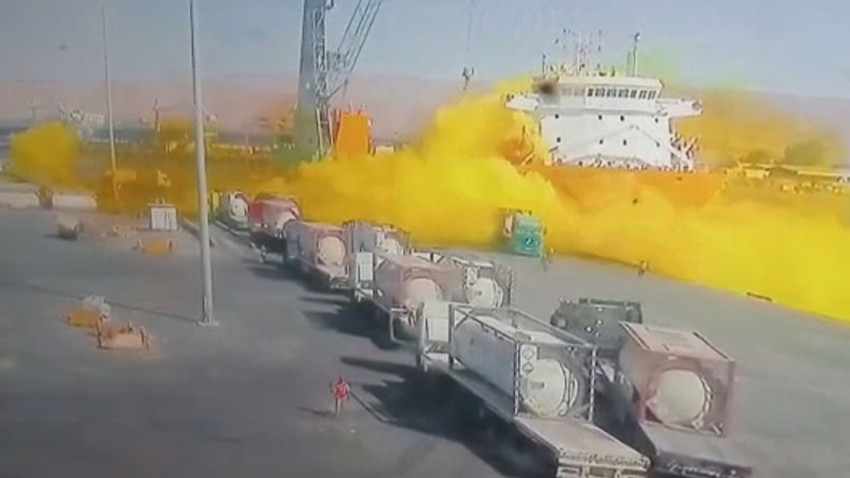 Weather of Arabia - The representative of the chemical industries sector in the Jordan Chamber of Industry, Engineer Ahmed Al-Bas, said on Tuesday that chlorine gas, which was leaked in the port of Aqaba on Monday afternoon, is used to clean water and has many uses in all countries of the world.

He added to "The Seventh News" on the "Roya" channel, that there is confusion in the use of the term "explosion" because the gas substance does not explode or burn, indicating that what happened was the fall of a silo or a tank dedicated to transporting such materials, which is made of hard steel and weighs approximately 29 Tons.

He explained that the gas was liquefied and compressed and turned from a liquid to a gaseous substance as a result of the crane rope being cut off and the tanker falling, and those in the vicinity of the crane inhaled it, which led to the registration of deaths and injuries.

He pointed out that there is no defect in storing the tanks in which the material was transported, because they are originally intended for transporting these containers, which are subject to continuous checks by the relevant agencies.

The National Center for Security and Crisis Management had announced that at exactly 5:15 pm on Monday, chlorine gas leaked in the port of Aqaba as a result of the fall and explosion of a tank containing this substance, and the accident caused the death of 12 people and injured 260, including Jordanians and foreigners, and 123 people are receiving treatment in hospitals .

Symptoms of inhaling toxic chlorine gas may not appear immediately

In a related context, Dr. Muhammad Al-Tarawneh, a specialist in chest and respiratory diseases, said that inhaling chlorine gas in large quantities and in high concentrations directly affects the respiratory system, which leads to the occurrence of pneumonia that causes death.

Al-Tarawneh added to "News of the Seventh", that the symptoms of inhaling chlorine gas sometimes do not appear directly on the person, and may appear hours after that.

And he indicated that chlorine gas not only affects the respiratory system, but may cause burns to the skin and inflammation in the eyes, and may also affect the esophagus, pharynx and nervous system and cause headaches, which may consequently lead to fainting.

Tarawneh concluded that people with a history of respiratory illness are directly affected by chlorine gas even when inhaled in small quantities.