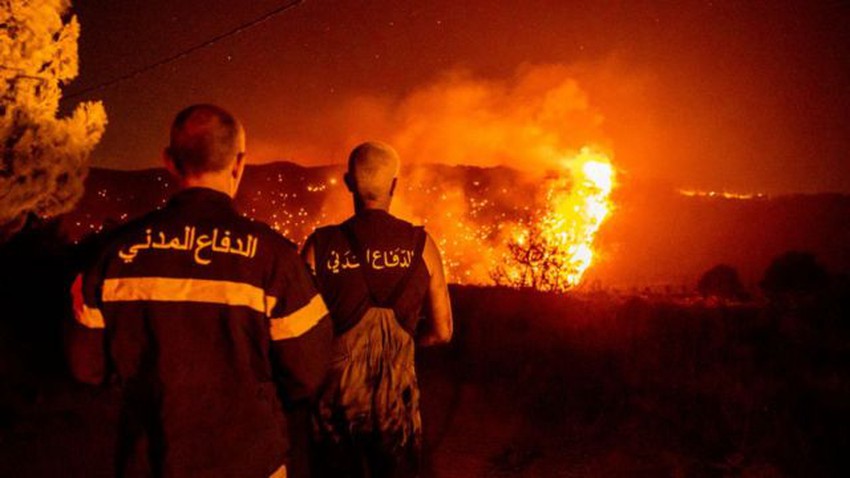 Arab Weather - The fires in northern Lebanon are still the talk of people on social media for the third day in a row. The Lebanese exchange photos and videos showing the horror of the scene, calling for aid to quell it.

The fire that broke out on Wednesday in the village of Qubayyat renewed again and spread to Syria, and the National News Agency in Lebanon said that the fires were out of control in the Jabal Akrom region at the northeastern border with Syria. At night, the fires expanded and intensified in the locality of Qurnat Diba, approaching homes, orchards and agricultural fields.

The fires also resulted in the death of a 15-year-old boy who was a volunteer helping in attempts to put out the fires. The Lebanese Red Cross said that about 17 people were evacuated and 30 were treated, 8 of whom were taken to hospital.

The Lebanese Civil Defense announced that there are 25 firefighting vehicles, four helicopters belonging to the Air Force and military units working to contain the fire. However, despite these efforts, the fires expanded to devour large areas of forests in northern Lebanon.

Andakt village mayor Omar Masoud estimated the area of land affected by the fires at about two million square meters of pine and oak forests. fire."

The cause of the fires

After the fires spread widely, there were many analyzes and questions about whether these fires were provoked or not. And the mayor of a village described the fires as "manufactured" and demanded an investigation into this matter.

This is an opinion agreed upon by many Lebanese on social networking sites.