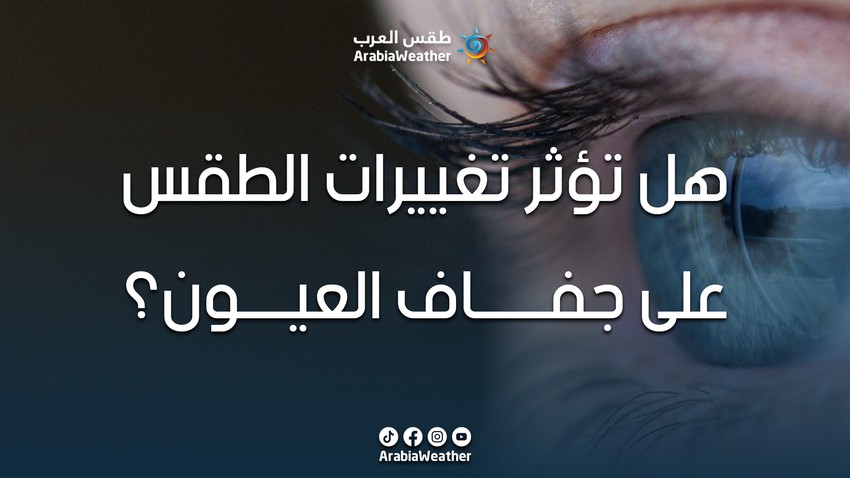 Weather of Arabia - Dry eyes are one of the most common problems associated with winter and cold weather, a condition that causes irritation of the eyes and a feeling of burning or itching in them, which leads the patient to rub his eyes to relieve these symptoms, which may cause an increase in the severity of these symptoms.

Dry eyes may also be accompanied by a feeling of the presence of a foreign body inside them, or even an increase in the secretion of tears significantly as an attempt by the eye to compensate for the lack of sufficient tears. Dry eyes for long periods without treatment may cause the development of some complications such as an increased risk of infectious diseases, or blurred vision.

Dry eyes can be a major problem for people who wear contact lenses, and for people who suffer from chronic dry eyes, a condition that causes the eyes to produce poor quality tear film.

The effect of weather on dry eyes

Cold winds and dry air that accompanies winter and cold weather cause dry eyes, in addition to the use of heating devices such as stoves and air conditioners that cause dryness in indoor spaces increases the problem of dry eyes.

Exposure to wind or dry heat causes sudden evaporation of moisture inside the eyes, with the lacrimal glands unable to produce tears quickly enough to maintain the protective layer of tears that keeps the eyes moist, causing dry eyes and associated symptoms, such as dryness and itching.

Some behaviors that humans practice during the winter season may also increase the risk of developing dry eyes. These behaviors include:

Indoor heating : The use of different heating devices to heat homes and various closed places during the winter is a natural behavior practiced by everyone, but this process causes a decrease in the humidity level in the air below the 30-55% necessary to maintain the moisture of the eyes sufficiently to prevent the development of dehydration them.

Not hydrating the body sufficiently: Many people neglect drinking water and getting enough fluids during the winter, as cold weather contributes to discouraging the mechanisms of thirst in the body, with increased evaporation of moisture from the eyes as a result of exposure to air or dry heat. It is noteworthy that the occurrence of any dryness in the body, even if it is simple, can negatively affect the tear structure of the eye.

The use of a car heater: It is common in cold weather to use the car heating at the highest levels of heating, and direct it towards the face as soon as it rides, which is similar to using a hair dryer on the eyes, which may cause severe dryness in the eyes and very quickly.

Not obtaining the necessary nutrients: Studies have shown that the dry air associated with the winter season is capable of causing inflammation in the tear glands of the eyes, which may cause a partial closure of the tear duct, which increases the risk of exposure to dry eyes, which can be mitigated by adhering to a regimen. Diet rich in omega-3 fatty acids.

Spring: Allergens such as pollen, which abound in the spring, are considered one of the most important factors affecting dry eyes during this season, as a study found that most cases of dry eyes that occur during the spring are caused by an increase in pollen in the air.

Summer: The summer is the least season that causes dry eyes, as a decrease in the percentage of people who suffer from dry eye symptoms during the summer, with a decrease in the severity of symptoms, has been linked to the hotter and humid weather that accompanies the summer, which increases From the moisture of the eyes, and reduces their dryness.

Tips to avoid the negative effects of weather on dry eyes

Although it may be difficult to completely avoid the dryness of the eyes that accompanies weather fluctuations, especially those associated with winter, the risk of dehydration can be reduced, and the moisture of the eyes increases by following some preventive steps, which include the following:

Have you chosen the right clothes for the rainy weather today? The clothing recommendations service from Arabia Weather made it easy for you