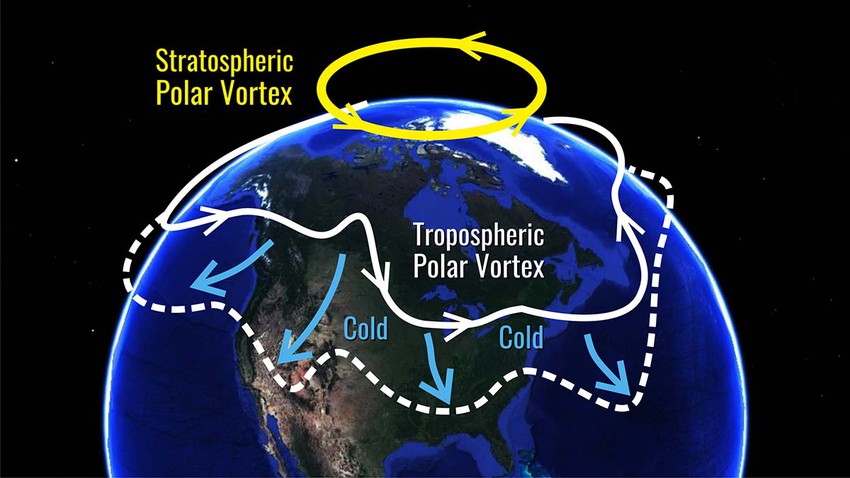 Arab Weather - New research found that the decrease in the global average temperature (7.8 degrees Celsius) during the last ice cap was associated with the deflection of the polar vortex southward compared to what it is today. Continental tens of meters above sea level. Today, we may face the worst winter conditions in terms of cold temperatures due to the southward drift of the polar vortex. Will we witness another ice age? 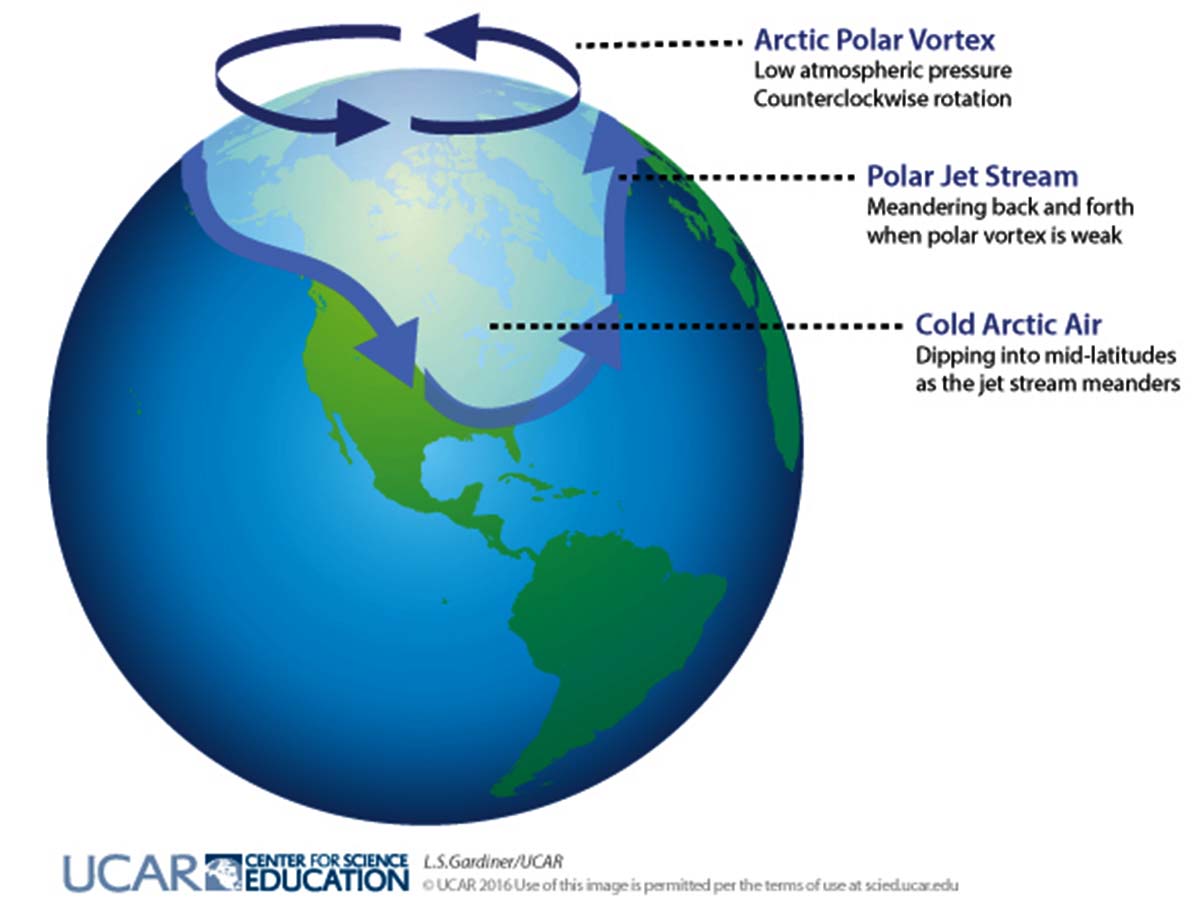 The fluctuation of the polar vortex is the main driver of the greatest cold waves affecting the United States and Europe, so what is a polar vortex? And how did it contribute to the occurrence of the last ice age?

What is a polar vortex?

The Polar Vortex is a low-pressure system located almost permanently just above the North Pole, a large region of cool, swirling air that surrounds both polar regions.

In other words, it is the flow of winds at high latitudes, such that this system, which flows around the Earth, leads to the appearance of equal, closed lines in the form of roughly concentric circles, which appear as a vortex when viewed by an observer looking at it from directly above the North Pole.

A simpler, more general term for the polar vortex may be used, the Polar Front , as the polar front ideally separates cooler Arctic air from the milder subtropical air in the mid-latitudes.

It is a large-scale low pressure system that is particularly active in the cold winter season, and the high-speed rotating winds are located at an altitude of between 15 - 50 km. The stratospheric polar vortex strengthens and extends in the fall and contracts in the spring, and is absent in the summer because its autumn origin is caused by the cold air formed in the surrounding Arctic regions.

It is defined as the polar region of the tropospheric jet, which extends from the ground to an altitude of about 10-15 km, is present year-round, unlike the stratospheric polar vortex, but temporary events can jeopardize its existence, for example, its fragmentation and subsidence may cause In the mid-latitudes, extreme cold will prevail in Europe or the United States. 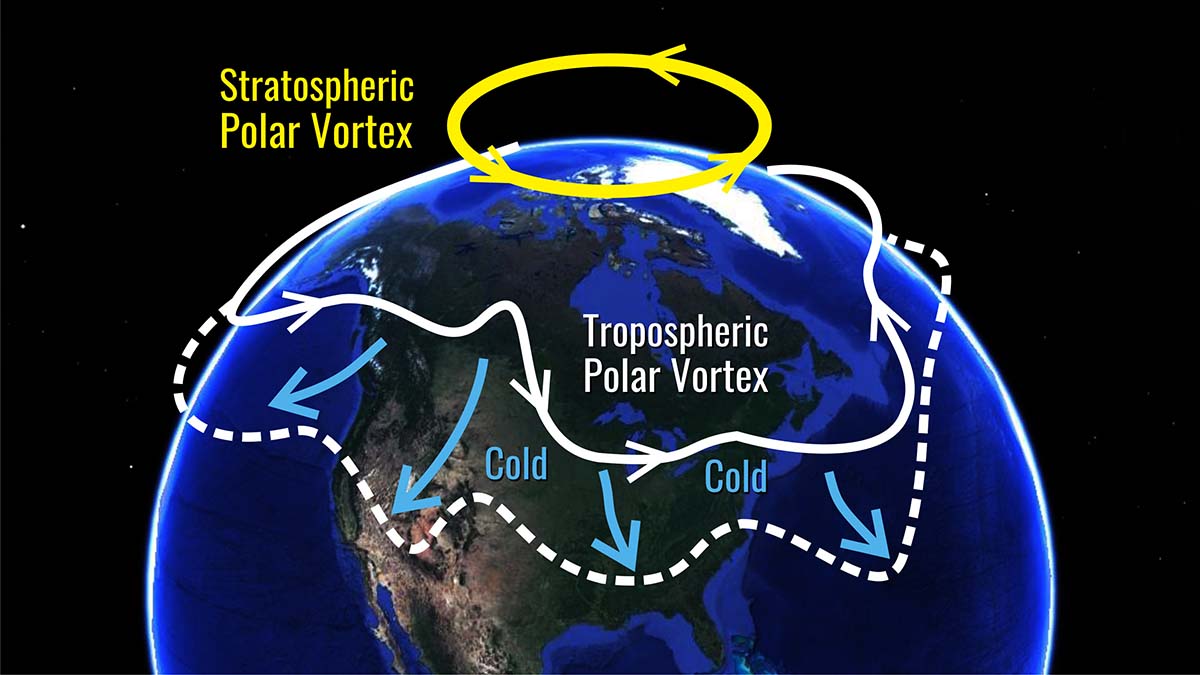 The dynamics of the polar vortex over the last twenty years

The low pressure region can be imagined as a large peak at a high altitude with a counterclockwise rotational motion, centered around the North Pole. On the other hand, in the troposphere, the prevailing pressure regime is high pressure. The faster the rotation and the higher the density of the vortex, the lower the probability of a polar hail descending toward mid-latitudes.

If the polar vortex weakens, the jet stream tends to be more meandering. This allows cold Arctic air to fall abruptly in latitudes affecting North America or Western Europe. 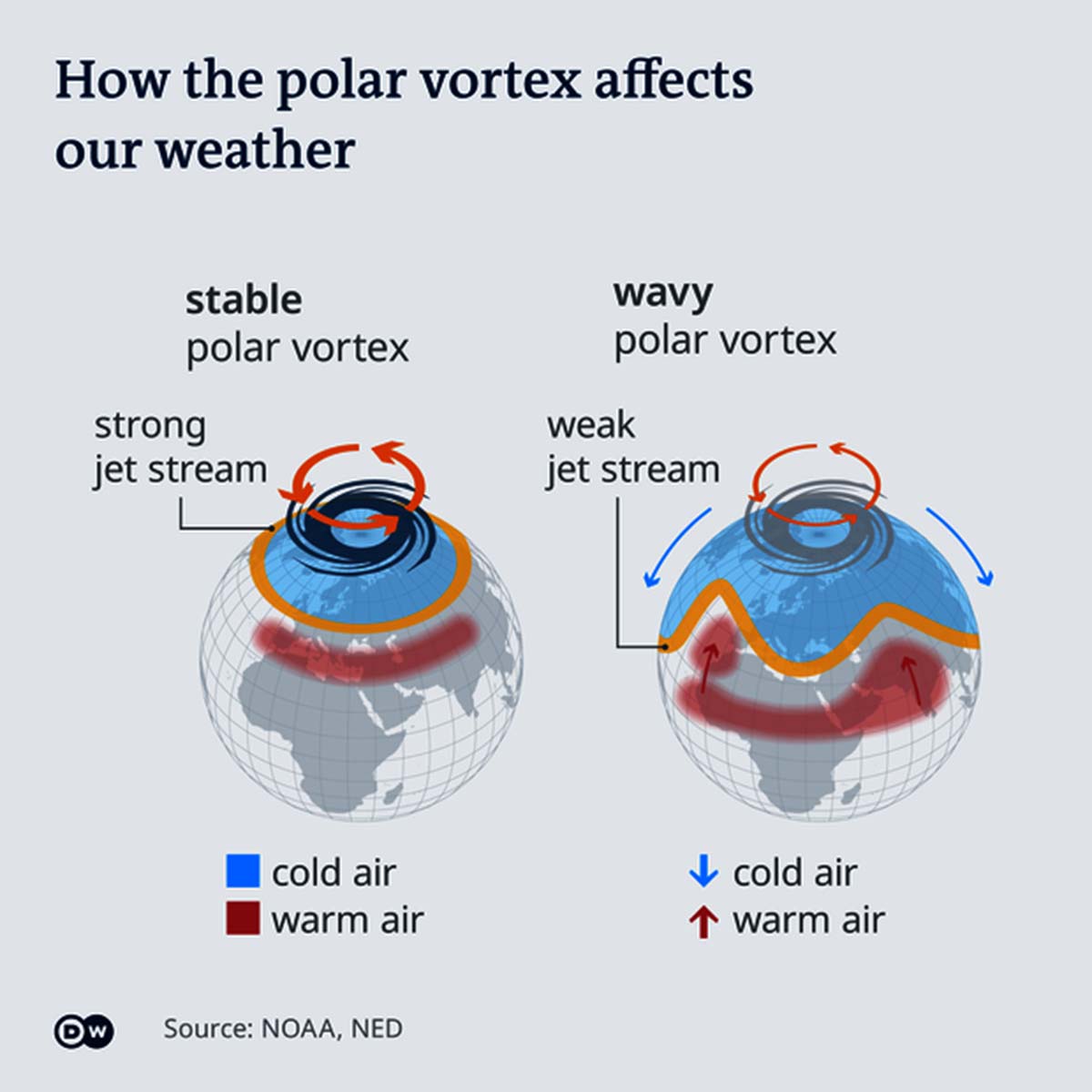 Low NPO correlates with southerly winds along the west coast of North America, which tend to bring warmer air to the region, and high NPO brings northerly airflow, with corresponding movement in the subarctic cold air region. 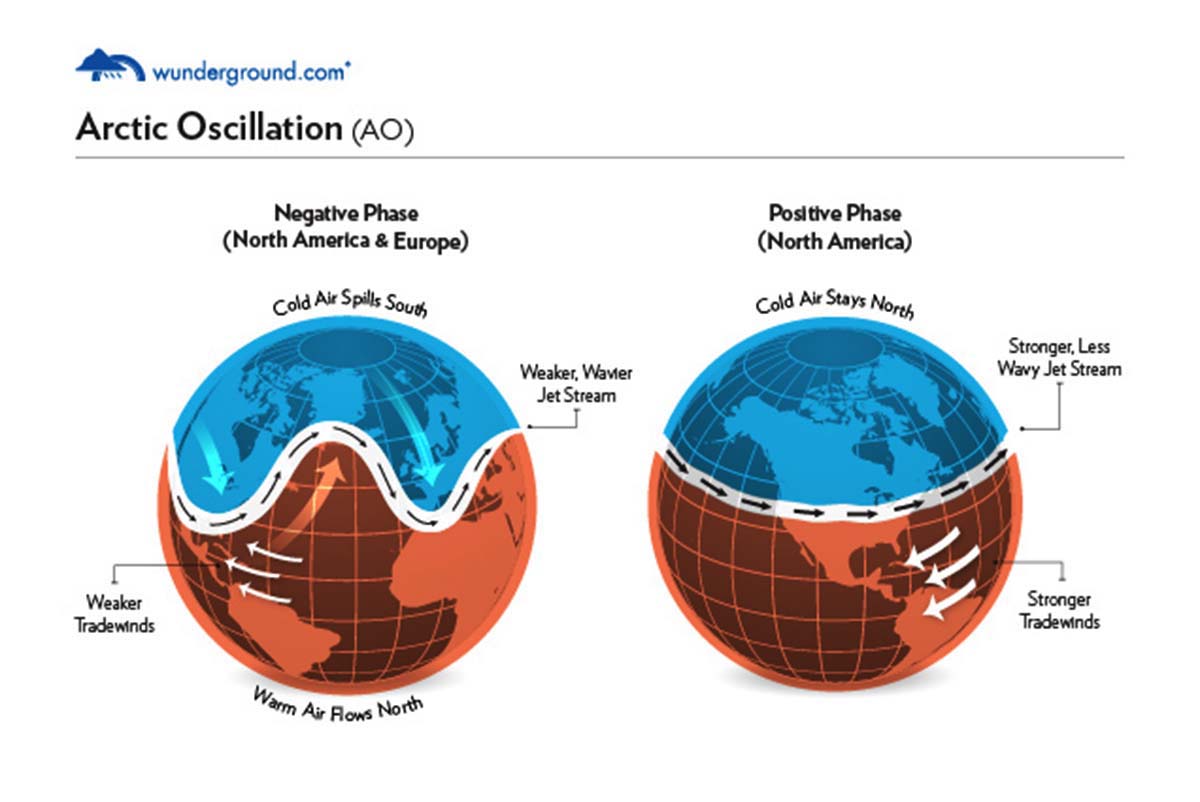 Within a few weeks of sudden stratospheric warming , Arctic air moves very rapidly toward southern latitudes, resulting in cold outbreaks with significant drops in temperatures. It's almost certain that there will be cold arctic air moving toward southern latitudes, but it's hard to pinpoint exactly which area the cold will affect, sometimes as far as the United States or Western Europe.

In practice, the southward shift of the polar vortex, as it has on many occasions in the past, brings Europe and the United States back to the weather conditions that prevailed during the Last Glacial Maximum.

What was the height of the last Ice Age on Earth 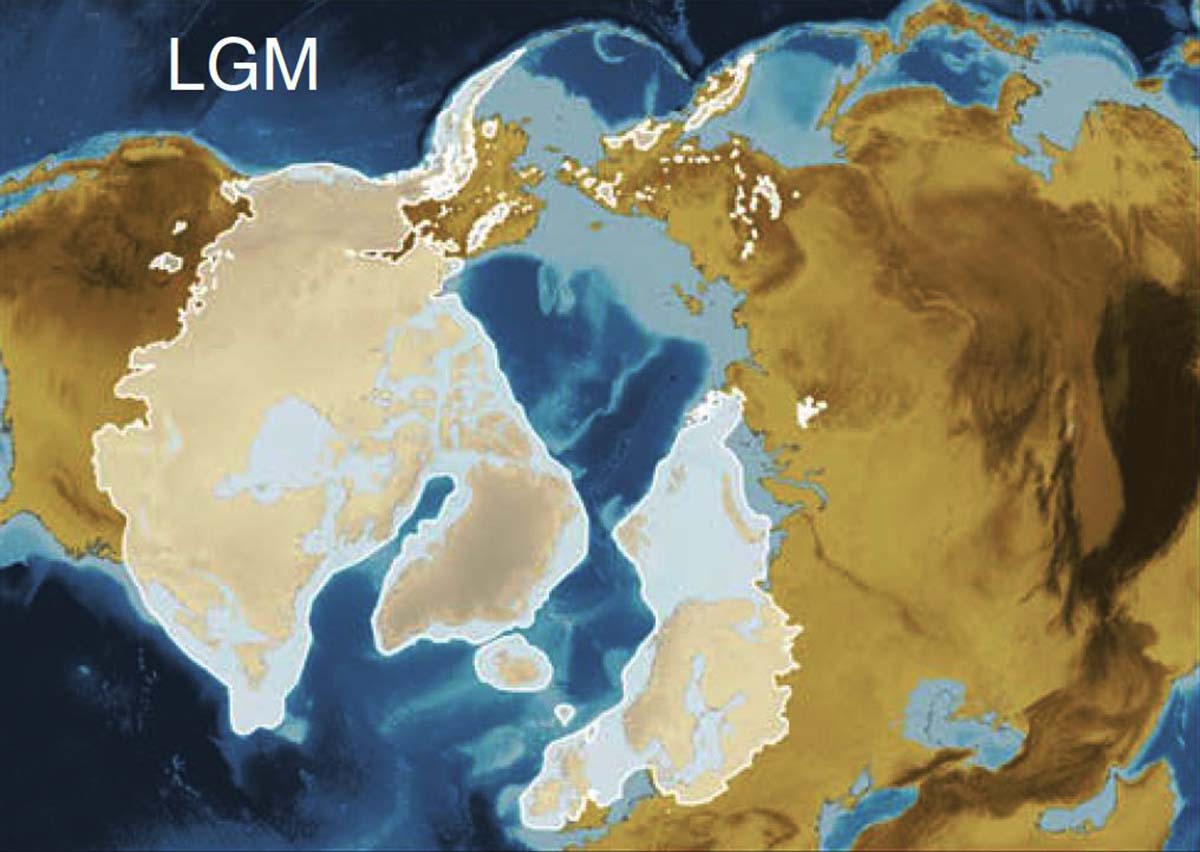 In a recent study published in the prestigious scientific journal Nature, scientists calculated how the average global temperature was during the last glacial peak about twenty thousand years ago. The research team used models that link data from oceanic plankton fossils to sea surface temperature. The fossil data was linked to climate model simulations of the last glacier, to predict what the climate was like.

The team of scientists calculated the Equilibrium Climate Sensitivity. Climate sensitivity is a measure of how cold or warm the Earth's climate is after a change in the climate system, such as how much the temperature rises after doubling concentrations of carbon dioxide in the atmosphere.

Climate sensitivity equilibrium sensitivity was calculated at 3.4 °C, when carbon levels during the Ice Age were about 180 ppm, then rose to about 280 ppm during the Holocene (the last ice age), and are now at 419 ppm.

During the peak of the last Ice Age, the Earth's temperature calculated in this way was probably 7.8 °C (46 °F), a decrease of -6.1 °C compared to the pre-industrial period (before 1850), while the average global temperature was In the twentieth century 14°C, the current average Earth temperature is now approaching 15°C.

Nowadays, with the effect of global warming, some regions of the planet are affected differently by climate change, so the arctic regions of the planet cooled twice as much during the height of the last ice age, so that the temperature was about 14 degrees Celsius lower than today, and the mountainous regions were also affected The European Alps may have cooled by about 10°C compared to pre-industrial values.

A decidedly cooler climate triggered the planet's cryosphere response, as ice sheets expanded and new layers formed. In Northern Europe, the Eurasian Ice Sheet covered Scandinavia, part of Northern Europe, and part of the British Isles as far as Ireland.

Central Europe was completely affected by permafrost and permafrost that in some cases reached hundreds of meters in depth, and the Eurasian ice sheet is estimated to have reached a maximum thickness of about 3,000 meters (9,800 feet).

The same thing happened in North America. The North American ice sheet was about 3 km thick and covered North America from the Canadian Arctic all the way to the modern US state of Missouri.

The North American ice sheet pushed south to the latitude of Seattle, Bismarck, Madison, and New York, and a portion stretched off the eastern coast of the United States in latitude to the cities of Indianapolis, Columbus and Pittsburgh.

But it was the presence of large ice sheets that changed the general global circulation, as well as the amount of sea ice. In the Atlantic, sea ice surrounded all of Greenland and Iceland, and seasonal sea ice reached the coasts of France and sometimes northern Spain. In the Pacific Ocean, sea ice completely surrounded the Aleutian Islands in Alaska, and a vast area of ​​land, called the Beringia, linked Siberia to Alaska.

This contributed to the growth of glaciers in the European Alps thanks to increased rainfall, and moisture entered the Mediterranean from the west thanks to the shifting Antarctic front, to be fed in this way by the glaciers of the Alps.

What causes an ice age?

The causes of ice ages are particularly related to astronomical influences, as differences in the eccentricity and axial tilt of the Earth lead to a periodic variation in the solar radiation that reaches the Earth, which strongly affects Earth's climate patterns, and the periodic oscillation leads to the occurrence of glaciers every 100,000 years.

The combined effects of these three types of orbital cycles lead to a different amount of solar energy reaching the Earth in different seasons, especially at higher latitudes.

During the Ice Age, cold weather prevails as the polar vortex shifts to the south. Snow falls more and melts less in short summers, causing huge amounts of fresh water to freeze in continental ice.

The ice age eventually helps to remove part of the atmospheric water from the Earth's hydrological cycle, and the direct result is a drop in sea level globally. 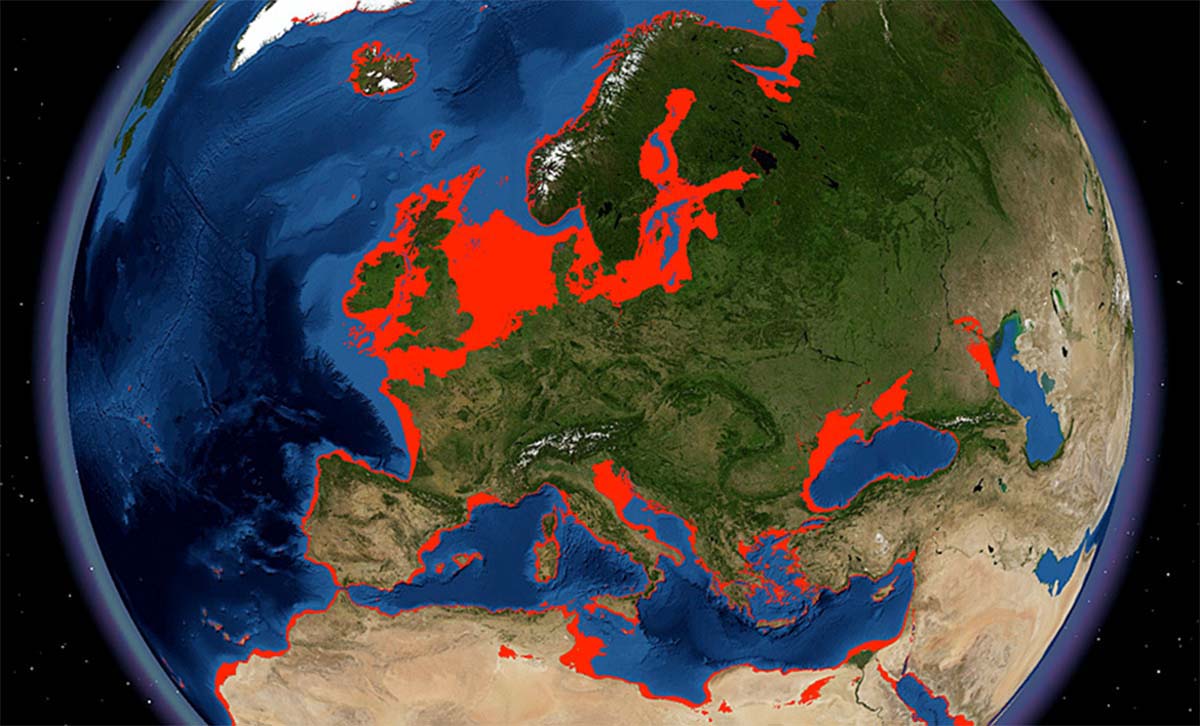 Therefore, the polar vortex is a well-known meteorological and climatic structure today, associated with the extreme cold, snow, and blizzards that it brings with it.

The polar vortex has, in the past, been an essential component of modulating changes in Earth's climate history and also responded to changes in climatic parameters. In particular, the past 2.56 million years have been characterized by a series of recurring glacial periods and shorter interglacial periods.