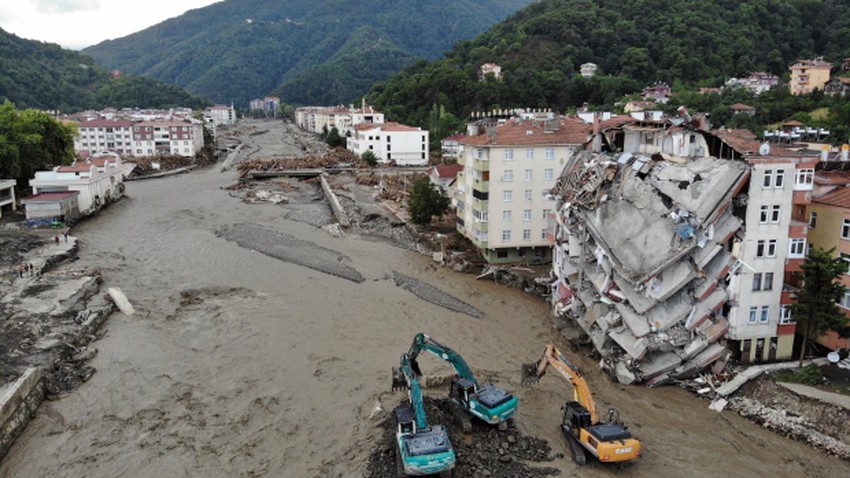 Weather of Arabia - At least 44 people died in Turkey in a temporary toll, due to devastating floods that swept the north of the country, after heavy rains fell on Tuesday night, Wednesday, and the floods came after a series of fires that killed eight people.

At a time when the country is still recovering from massive fires that killed eight people in the southern tourist area, these devastating floods came, as the water level rose to four meters in some cities after heavy rains, and the streets of entire cities were submerged in torrents that washed away cars and caused a collapse Some buildings were destroyed, many bridges were destroyed, some streets were closed with wrecked cars, and the electrical power supply was cut off. "I've never seen anything like this before," a resident recounts how, within a few minutes, his house in Bartin province was surrounded by water. "The water rose above our windows, broke our door and smashed our garden wall," he said.

In turn, Minister of Agriculture and Forestry Bekir Bak Demirli said, "It is a catastrophe like we have not lived in 50 or 100 years, perhaps." A large number of scholars believe that natural disasters, such as those that follow in Turkey, may become more frequent and severe.

In the face of rising water levels, relief teams had to evacuate 45 patients from a hospital in the coastal Sinop region, and villagers were evacuated by helicopter after they took refuge on the roofs of their homes. Several bridges collapsed due to landslides.

The Meteorological Department expects rain to continue in the affected areas on all days of the week. The Turkish regions bordering the Black Sea are witnessing frequent floods, and six people died a month ago in Rize, in the northeast of the country.