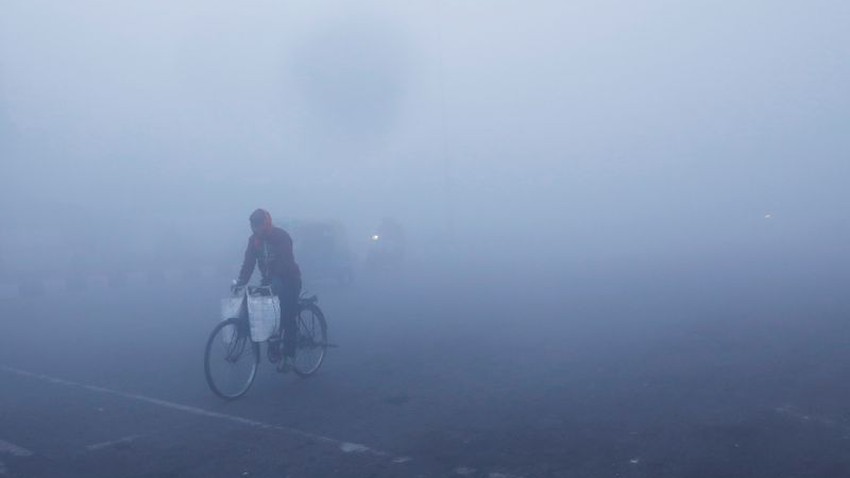 Weather of Arabia - In the second most severe wave of freezing rain sweeping western and northern India in 119 years, at least 6 people died. Thick fog formed and aspects of life were paralyzed in several regions of the country, including the capital, New Delhi.

In Uttar Pradesh, India's largest state, six people were killed when their car slipped off a road to ventilate on a water channel. Police said the accident was caused by thick fog.

Dense fog covered India, a vast area, and the sprawling city of Delhi with a population of 20 million, which reduced visibility.

Local media reported that 16 flights were diverted, four canceled and about 500 postponed in Delhi.

The Delhi city government has moved many of the displaced to temporary shelters, but many are still sleeping in the open.

"Looking at average temperatures in December, we are facing the coldest month in 119 years," said Kuldeep Srivastava, senior researcher at the Indian Meteorological Department.

Sunday's minimum temperature in Delhi was 2.8 degrees Celsius, slightly higher than the 2.4 recorded on Saturday, which is the lowest temperature since 2013.

"The low clouds over the western and northern parts of the country, the cold winds blowing from the Jammu and Kashmir regions of the Himalayas, Himachal Pradesh and Uttar Kand, as well as snowfall in the mountainous areas around Delhi are all factors that have led to a sharp drop in temperatures," Srivastava added.

Meanwhile, the very cold weather continued in northern Bangladesh, where at least 50 people died due to the severe cold wave sweeping the country.

The meteorological office said that the lowest temperature in Bangladesh this year was recorded on Sunday and reached 4.5 degrees Celsius in the border town of Titulia in the north of the country.

In Pakistan, Prime Minister Imran Khan asked the Chief Ministers of Punjab and Khyber Pakhtoon Khwa provinces to move the displaced to shelters.