During the historical heat wave.. Record temperatures were recorded in several regions of Europe, including exceeding 45 degrees Celsius 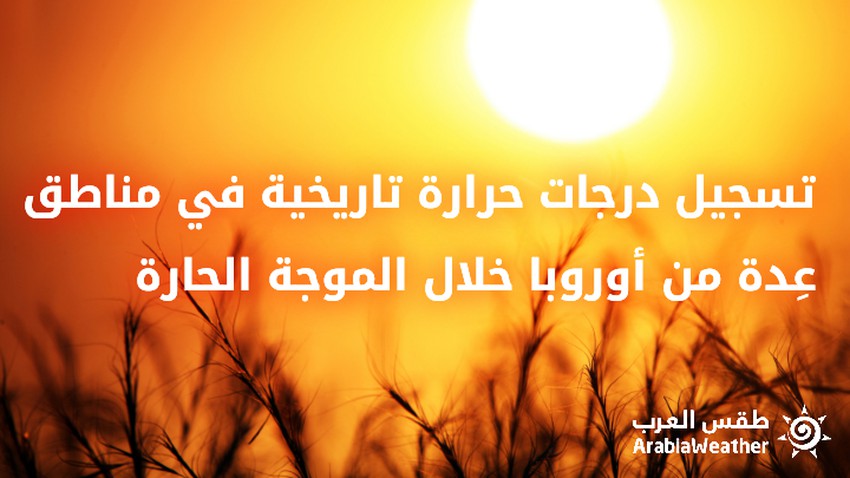 Arab weather - many regions of the European continent, especially the southwestern and western parts of it, were affected as of July 13, 2022, by a heat wave whose effects were increasing from day to day until it reached a limit that can be described as exceptional and historical, and several regions of the European continent recorded record temperatures It was recorded for the first time in history that Kuwait City and Baghdad were less hot than some European regions in one period. Details

The heat wave began to have a strong impact on Portugal and its neighboring countries. On 13/7/2022, the Portuguese city of Lusa recorded record temperatures that reached 46 degrees Celsius, and only an additional 24 hours was recorded, and a new record was recorded in terms of temperatures in the city of Pinhao by 47.0 degrees Celsius, which is the highest in 25 years, i.e. since 1995.

The Spanish capital, Madrid, records a temperature equivalent to the first record in its history

Spain was also among the first countries severely affected by the heat wave. The Spanish capital, Madrid, recorded 40.7 degrees Celsius on 14/7/2022 and equaled the highest record throughout history, which was recorded in August 2021, thus recording similar record temperatures to the previous one in less It is reported that the same meteorological stations recorded the warmest night in the Madrid climate record, due to the fact that the temperature did not drop below 26.2 degrees Celsius.

But many people may be surprised by high mountains and very high temperatures, how are you? ... The answer is yes. One of the physical properties of warm or warm, moist air is that it is light in weight and has less density than cold air. When heat waves occur, hot air that is light in weight floats and is concentrated in the mountain tops.

London records the highest temperatures in its history

The impact of the heat wave on Britain was severe and unusual, as 40 sites broke the highest record temperature in Britain's history, which was 38.7 degrees Celsius.

Additional regions and countries from the European continent record record temperatures, including: