Weather of Arabia - It is expected that Algeria will be affected by a rainy weather condition, which is considered the best, the widest and most comprehensive in terms of the area of the affected areas, after the will of God for months, and in conjunction with the entry of the autumn season from an astronomical point of view, in the middle of next week, and the following details:

Preliminary details of the rainy condition

In the details, the weather forecast staff in the operating room in Arab weather is watching a possible rainy situation in northern Algeria in the middle of this week, as a result of the rush of a cold upper basin from western Europe in conjunction with the arrival of moist air currents from the east, working to create strong weather turbulence in the northern regions starting On Monday, and the night of Tuesday/Wednesday intensified, amid serious warnings that some of these areas may be exposed to torrential torrents due to the heavy rainfall expected in some states from the north of Algeria. 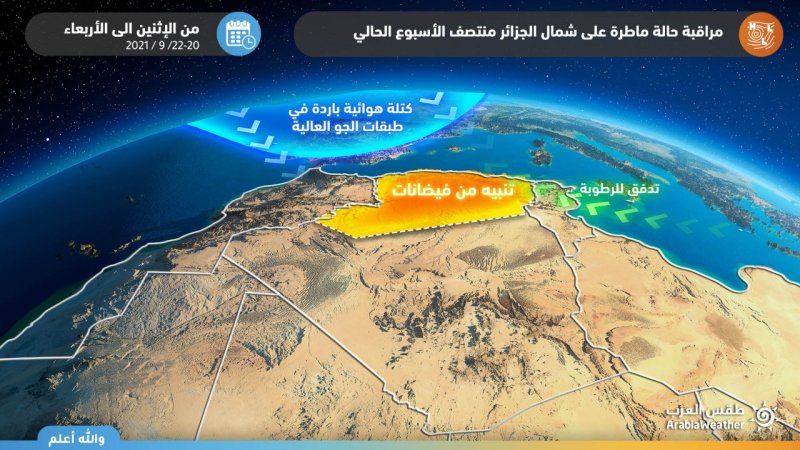 Given the expected large thermal differences between the surface of the earth and the colder air above, it is expected that thunder clouds will be dense and strong thunderstorms sometimes blow. It is dense and leads to accumulations, especially on the mountains.

The forecast staff alerts during the expected rainy situation from:

Arab Weather notes, however, that it is not possible to finalize the details of the expected weather situation, due to the wide margin of error in such cases, and Arab Weather will issue reports and forecasts according to the latest developments.