Early warning: More severe weather disturbances, starting from Saturday, in Saudi Arabia, causes thunderstorms to be heavy in some parts, causing the risk of torrential rains 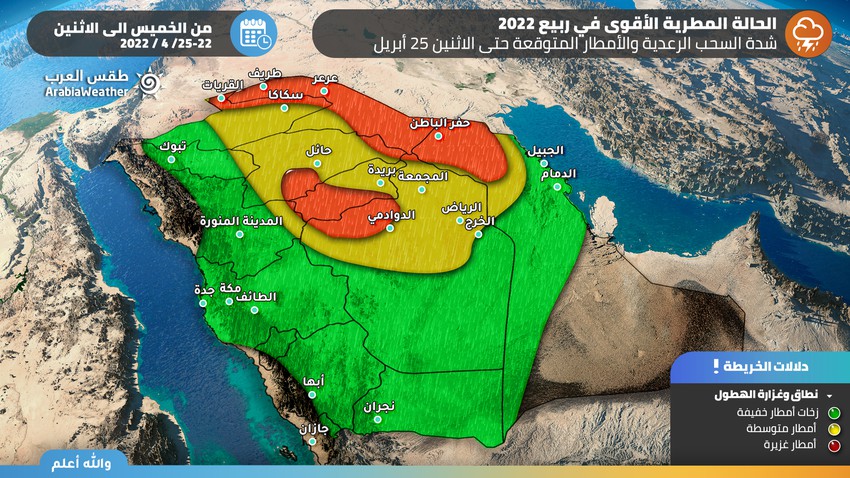 Arab Weather - Specialists in the Weather Operations Department at the Arab Regional Weather Center for Meteorology and Weather Forecasts have reported expectations that the rainy situation will intensify in the Kingdom of Saudi Arabia and expand to include new areas in the coming days. According to the center, it is expected, God willing, that the state of rain stagnation witnessed in most regions of the Kingdom during the past winter will break, as the rainy situation affecting the Kingdom is considered as saving the rainy season.

In the details, the outputs of the computer processing developed in the Arab Weather Center indicate expectations that the upper cold basin will deepen from the north (the Levant and northern Egypt) during the coming days, coinciding with the rush of moisture-saturated tropical currents in the different layers of the atmosphere, especially the middle and high ones, and this means the availability of Many weather conditions and factors of mechanical (mountains) and dynamic air lift (cold upper basin in the north), in addition to thermal heating during the afternoon and afternoon, and these weather factors combined, God willing, to form dense thunder clouds over the mountains and move west towards the coasts. 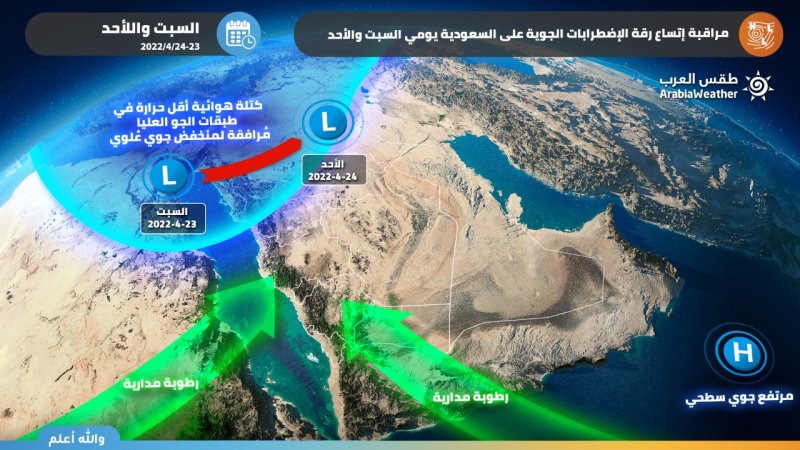 Chances of thunderstorms widening to include large parts of the Kingdom, Saturday and Sunday

According to the latest weather readings , the first weather disturbances will begin on Saturday morning in random and scattered parts of the center and north of the Kingdom, and with the noon hours, formations begin to form on the southwest of the Kingdom, represented by parts of Jazan, Asir, Al Baha, and Mecca in addition to Najran in the southern sector, and the rains will be moderate in intensity. Altogether in the aforementioned areas. While the cumulus formations are more mature and with a vertical depth (that is, they are accompanied by heavy rain sometimes and active downward winds) in the areas of Hail in particular, Al-Qassim, Al-Madinah Al-Munawwarah, eastern Tabuk and parts of Al-Jawf, especially the southern and eastern parts of it, and extending to parts of the northern borders, especially in the afternoon hours. And the evening, God willing, and it may reach parts of the north and west of the Riyadh region and Hafr Al-Batin as the evening and night hours pass.

The computer modeling developed by Arab Weather has shown expectations that weather disturbances will be severe in many periods, especially over the Hail region, east of the Medina region, and parts of eastern Tabuk, the areas of Tayma Governorate, and perhaps extending to parts of the northern border and north of the Qassim region, and these thunderstorms are characterized by being heavy. Sometimes, they cause the flow of valleys and form torrents in a way that may be dangerous at times, in addition to being preceded in many cases by a great activity in wind speed that may cause the formation of local dust storms. Weather forecasters at the Arab Weather Center stated that the chance is generally weak for some marine graduations to flow into some coastal areas of Mecca after midnight hours on Saturday / Sunday, and the chance remains weak until the early morning hours of Sunday, and chances of rain continue on random parts of the city. The center and north of the Kingdom on Sunday morning, represented by parts of Medina, Hail, Qassim, Hafr Al-Batin, the northern border, and the north of the Riyadh region administratively. Towards noon and afternoon, cumulus clouds are increasing in intensity and expanding to include the southwestern heights of the Kingdom and its eastern slopes, extending to Medina and administratively random parts of the Riyadh region, especially the northern ones, and Hail, Qassim and Sharqiya, especially the northern parts of them, all the way to parts of Al-Jawf and the northern borders.

Monitoring the improvement of rain chances in the capital, Riyadh, starting from Sunday night

According to the latest weather readings, the indicators point to the deepening of the air depression in the upper air layers of the Kingdom’s airspace on the evening and night of Sunday/Monday, so that the air rise in the middle layers of the atmosphere shifts from the eastern parts of the Kingdom, so that the rainy thunder belts move in the southeast direction, to improve as a result of that. Precipitation in the Hafr Al-Batin region, north and west of the Riyadh region administratively, and chances of rain may affect parts of the capital, especially during the late hours of the night. At the same time, the chances of rain are gradually declining from most of the northern and northwestern regions of the Kingdom, God willing.

The air system continues on Monday, so that the upper air depression is centered to the north, accompanied by an effective response to the Red Sea depression and its expansion to central and eastern Saudi Arabia and neighboring countries, which means the multiplication of thunder clouds and rainfall of varying intensity, and is random in nature in many parts of the Kingdom and includes new areas Such as the eastern and large parts of the Riyadh region, including the capital, and the rain is heavy at times and causes the flow of valleys and the formation of torrents in a way that may be dangerous sometimes, in addition to that it is often preceded by a great activity in wind speed that may cause the formation of local dust storms.

Despite the remoteness of the time period at which weather forecasts are less accurate, the cadre of weather forecasts in "Arab Weather" looks with optimism for the upcoming period, as the numerical simulation of the atmosphere indicates that the opportunity is favorable for more weather conditions during the remainder of the holy month. It is not possible to deduce all the details from now on for that period, but it is clear until the time of writing this report that there is an expected renewal of weather turbulence in the Kingdom at the end of this week, in light of expectations of a new depth of air depression in the upper layers of the atmosphere towards the northeastern parts of the Arabian Peninsula and the occurrence of a leak New air currents saturated with tropical moisture, in conjunction with rising temperatures, which additionally contributes to the ignition of cumulus clouds. However, this time it seems that the weather disturbances will focus on the eastern sector of the Kingdom in the first place. Updates that will highlight more details will be released incrementally as needed, God willing.