Early warning - Saudi Arabia | A sharp reversal in the weather and broad dust waves expected, starting at the end of the week 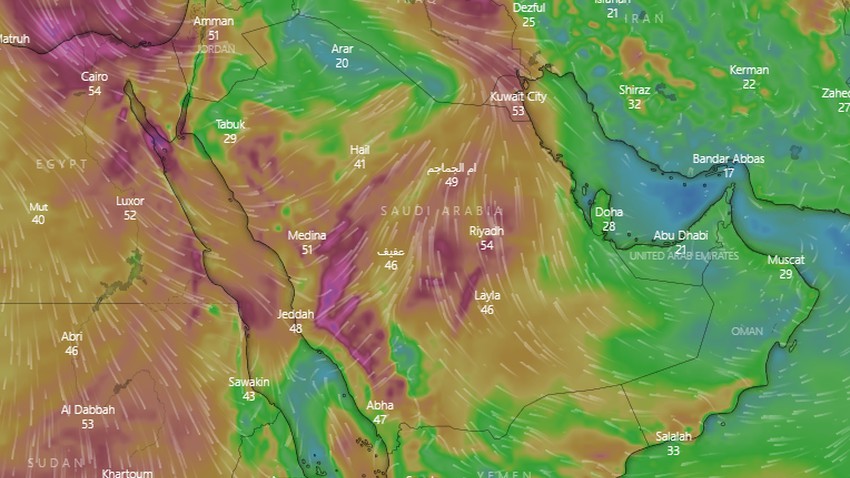 Arab weather - Sinan Khalaf - It is expected that large parts of the Kingdom of Saudi Arabia will be affected during the weekend, God willing, by unstable weather conditions accompanied by rain and dust waves in large areas.

Winds and dust waves are expected in many Saudi regions

In the details, the latest outcomes of computer simulations of air systems indicate positive changes to the systems in favor of the region, resulting in a rush of an air depression in the high layers of the atmosphere towards the middle of the Mediterranean Sea, which quickly moves to Egyptian lands, in conjunction with the blowing of warm and humid air currents from the shows Subtropical, which leads to the emergence of unstable weather conditions, coinciding with a clear and effective surface response to the Red Sea depression, before it turns into a frontal depression at the beginning of the week.

Perhaps the most prominent feature of the expected weather situation is the great activity on the movement of the winds, which is expected to cause the emergence of waves of medium, and perhaps sometimes dense, dust in large areas of the Kingdom, which appear gradually as of Friday in the central parts of the Kingdom, and intensify and radiate on Saturday. And Sunday to include most regions of the Kingdom, accompanied by strong winds in general, some of whose gusts reach 80 km / h, accompanied by a significant decrease in the range of horizontal visibility.

Increased chances of rain in many areas

It may include 12 administrative regions, according to the latest data

As for rain, the opportunity is ripe for many regions to witness an increase in rain opportunities, and according to the current forecasts, 12 regions are expected to be affected by weather fluctuations, which are Tabuk, Medina, Taif and Makkah, and perhaps the coastal parts, including Jeddah, in addition to Al Baha and Asir regions.   The effects of the rainy condition also include Al-Jawf, Hail, Al-Qassim, northern Riyadh, Hafr Al-Batin, and parts of the Eastern Province, where it is expected that these areas will be affected by unstable weather conditions, with showers of varying intensity, starting from Friday evening, and the Arab Weather will issue more details about the expected situation. In the coming days, God willing.