early warning | The winds of Al-Bawareh, Iraq and Kuwait, and a warning of dust waves, starting from Thursday 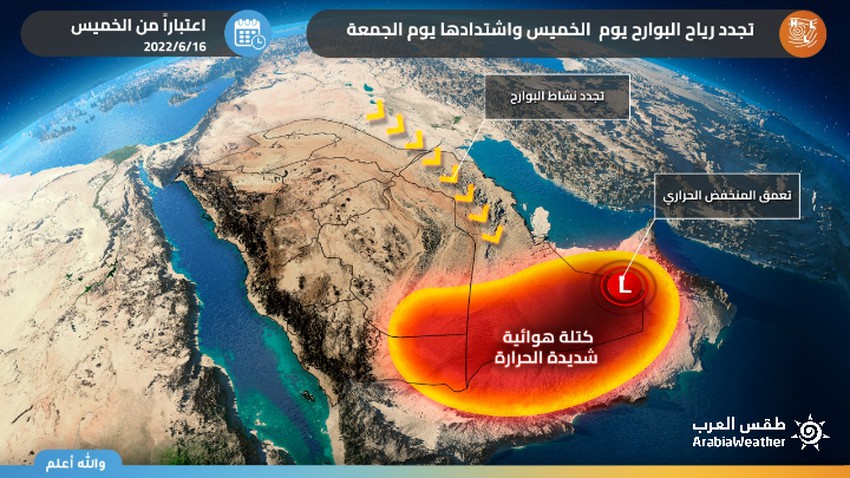 Arab Weather - The latest output of the numerical models processed by the Air Operations Department at the Arab Regional Weather Center indicates the return of northwesterly winds to southern Iraq and Kuwait, starting from Thursday and at the end of the week, when the north or northwest winds known as Al-Bawareh will be active in speed and accompanied by strong gifts Exceeding the 60 km/h barrier, it raises dust and dust and may form dust waves starting from the southern and eastern regions of Iraq and extending towards Kuwait, causing a decrease in the horizontal visibility.

It is expected that the dust-laden Al-Bawareh winds in eastern Saudi Arabia, Qatar and Bahrain will extend towards some coastal and interior areas of the Emirates, especially the western ones, causing a decrease in the horizontal visibility.

It is also expected that the waves in the Arabian Gulf will be turbulent, whether in the depth or on the coasts, as a result of the activity of the northwest winds, and the height of the waves sometimes reaches more than one and a half meters, especially in the depth.

The Arab Weather website advises to pay attention to the danger of an increase in the proportion of dust and dust in the atmosphere in many areas, and its impact on respiratory and eye patients and the extent of horizontal vision.