Earth acceleration: setting a new record for the shortest day on Earth 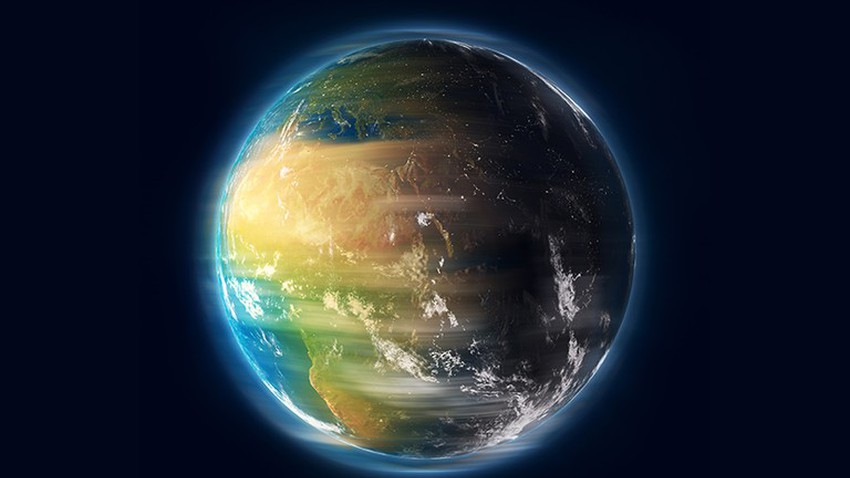 Weather of Arabia - During the past few years, scientists have noticed an unusual acceleration in the Earth's rotation around itself, which usually takes place within 24 hours, and the Earth recently broke the previous record for the shortest day ever recorded, on June 29, 2022, what does this mean? What effect does it have on our lives?

The Earth takes about 24 hours (86,400 seconds) to complete one revolution on its axis, and this rotation is the reason we see sunrises and sunsets every day. The Earth recorded its shortest day (since precise measurements using atomic clocks began in 1960) when on June 29, 2022, it completed its rotation in 1.59 milliseconds in less than 24 hours, breaking the previous record set on July 19, 2020, of 1.47 milliseconds less than 24 hour.

The Earth almost broke its own record again this year on July 26, when it completed its rotation in 1.50 milliseconds in less than 24 hours.

This comes among several observations recently recorded by scientists about the acceleration of the Earth. In 2020, scientists made a sudden discovery of the acceleration of the Earth’s rotation despite the gradual slowdown that our planet has undergone over thousands of years, as the Earth’s rotation has gradually slowed down over long periods of time (millions of years). It is estimated that dinosaurs that lived 150 million years ago experienced a solar day that was 23 hours long instead of 24 hours. 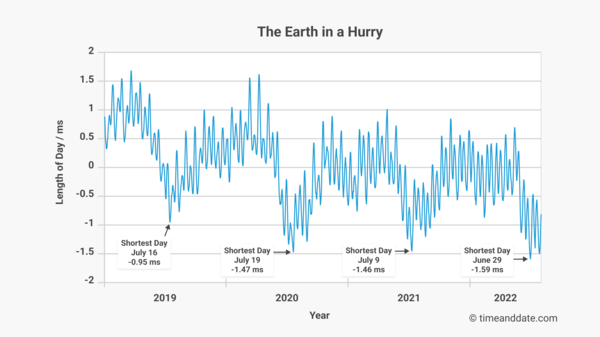 Read also: Recording an acceleration in the Earth's rotation that has not occurred in 50 years

Why is the Earth's rotation accelerating?

The acceleration in the Earth's rotation can also occur for a variety of other reasons, including the Moon's gravity, snowfall, and erosion processes, and global warming can also be a factor, as global warming contributes to a redistribution of mass on the Earth's surface, such as melting Glaciers that increase sea levels.

You may also be interested in: Why is the Earth's core so hot? And how did it stay hot so far?

Until a few years ago, the Earth's rotation was thought to be slowing down after several consecutive measurements by atomic clocks since 1973. The International Earth Rotation Reference Systems Service (IERS) began adding leap seconds every now and then to compensate for the slow rotation, the last time a leap second was added On December 31, 2016.

But the recent acceleration in the Earth's rotation made scientists talk for the first time about the need to subtract a second from time instead of adding a leap second, this second may not be important in everyday life, but it is of great importance in things such as navigating through navigation systems (GPS), and satellites. industrial, astronomy, spaceflight, as well as computer networks, stock markets, and much more.

If the solar days become shorter, negative leap seconds can be added to the hours to keep them in line with the length of the day. But doing so may put our computers, digital devices and IT systems at risk.

Tech giants such as Amazon, Google and Microsoft, and national organizations such as the US National Institute of Standards and Technology (NIST) and the French International Bureau (BIPM) recently warned that inconsistency in hardware internal clocks due to the addition of negative leap seconds can lead to disruptions in software and hardware applications The British newspaper The Independent reported that the addition of leap seconds was behind outages such as those experienced by Reddit in 2012 and Cloudflare.