Eclipse prayer .. A confirmed prophetic Sunnah and so on 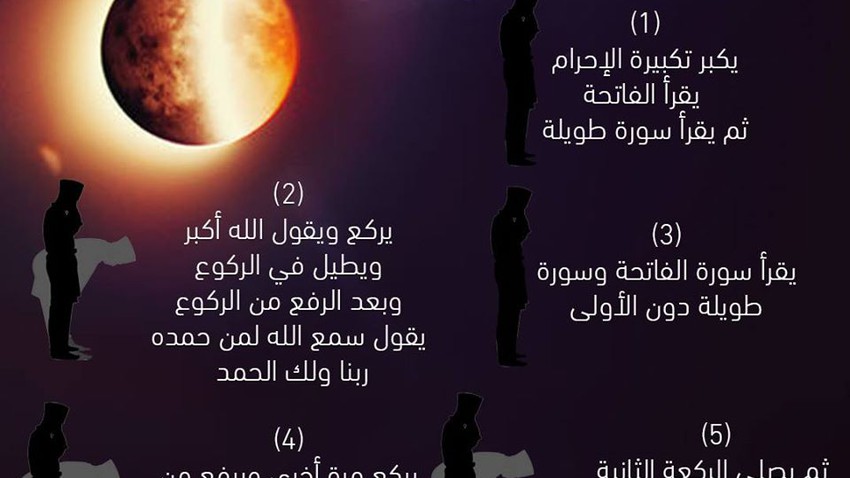 The weather of Arabia - Sinan Khalaf - awaits the residents of the Arab Gulf region on the morning of December 26 to see the rare annular eclipse that will be clearly seen in a number of countries in the region, including the Saudi Arabia and the Sultanate of Oman, and the eclipse is an astronomical phenomenon that does not harm or benefit, as our Prophet, peace be upon him, mentioned in the hadith “The sun and the moon will not be blown away for the death of anyone, nor for his life, but they are two of the signs of God Almighty, and he is afraid of them,

From here it becomes clear to us that the eclipse prayer is lawful in this event, which is a confirmed prophetic Sunnah, and here are some details on how the Eclipse prayer is performed.

The number of Raks of the Eclipse prayer is two:

The first rak'ah: The imam enlarges and recites al-Fatihah openly, then reads some of the verses of the Holy Qur’an and lengthens the reading a lengthy period that is not difficult for the congregation, then he kneels as the ritual prayer is written, then he rises from the bowing and recites Al-Fatihah again, then the verses of the Holy Qur’an are less than the first time, Then he kneels and prostrates two prostrations just like the written prayer.

The second rak'ah: He rises to the second rak'ah and does the same rak'ah as he did in the first rak'ah, reads the verses from the Qur’an and is less lengthy, then he testifies and submits. The time of the lunar eclipse prayer from the moment of the eclipse until the moon is cleared, and it is prayed any time the eclipse occurs from day or night, or even at times of forbidding.