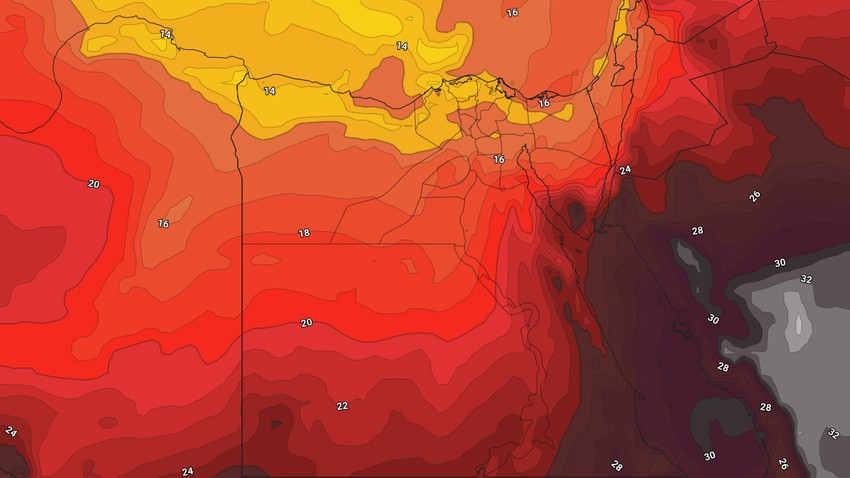 Arab weather - It is expected that the air systems in the European continent will change so that an air altitude in North Africa will dominate, extending to the south of the European continent and reaching its north, which means that the region will become within the path of moderately hot air masses at the end of the week, God willing, and thus the rule of mild summer weather in various regions, God willing.

Gradual decrease in temperatures in the coming days

In the details, it is expected that the rest of Egypt will be affected by a moderately hot air mass with values lower than its normal rates during Friday and Saturday, as a result of which the temperatures drop significantly, and a mild summer atmosphere prevails in most areas, while the weather remains hot in southern Upper Egypt, and some clouds appear. Medium and high altitude in some areas, causing local showers of rain to fall on the western coast of Egypt, and as a result of the distribution of weather systems, western winds are active in most areas and are dusty, especially in desert areas.

During the night hours, temperatures continue to decrease compared to the previous nights, so that pleasant weather prevails throughout the northern regions, while it is warm in the southern regions, and humidity levels rise and water mist is formed in parts of northern and central Sinai, and the winds are north to northeasterly moderate. speed in general.

This atmosphere comes as a result of the control of a stubborn air rise in all layers of the atmosphere in the northwest of the African continent, which extends at intervals to the depths of the European continent, causing a significant rise in temperatures there, which worked to rush cold air masses towards eastern Europe, that is, around the area of the air altitude, and there is also a high An air force lasts the sides of Iran, extending to the countries of West Asia, which worked to confine the cold air mass to the east of the European continent, with the expectation that it would extend towards the eastern basin of the Mediterranean, including Egypt.