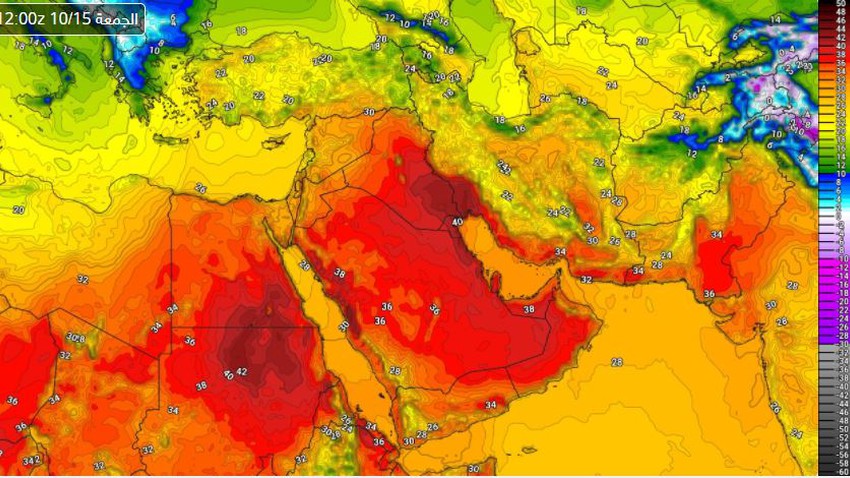 Arab weather - As a relatively cold air mass moves to the north of Libya, hot air currents rush from the African desert to Egypt during the weekend, with temperatures continuing to rise and hot weather prevails in the northern regions, while it is very hot in the southern regions, and here are the details:

Hot winds rushing from the African Sahara during the weekend

In the details, as a reaction to the rush of a cold air mass north of Libya, hot air currents move from the African desert towards Egypt, so that temperatures continue to rise to become higher than their rates for this time of the year by 5-8 degrees Celsius, so that the rise is tangible in all regions, especially The southern ones due to the extension of the seasonal Sudan depression, which brings the hottest air to the southern regions.

It is expected that hot air currents will directly affect southern Upper Egypt, with the maximum temperature reaching its peak on Friday and Saturday, with the greatest being around 43 degrees Celsius in the southern regions, while approaching the 35 degrees Celsius barrier in Cairo, and slightly less than that in the northern coastal areas. .

During the night hours, the weather will be pleasant in all the northern regions, while it is warm in the southern regions, as the humidity levels rise and water mist is formed in parts of Sinai, east of Greater Cairo and Suez, and the winds are north to northeast, moderate in speed, with the appearance of some clouds. Scattered at high and medium altitudes may be interspersed with local showers of rain in some limited areas.

As of Sunday, a moderately hot air mass is rushing towards Egypt from the eastern Mediterranean, where there is a remarkable drop in temperatures to become below their rates for this time of the year, and continue to decrease during the week, and the weather turns into a mild autumnal throughout the northern regions, including This is Greater Cairo all the way to the north of Upper Egypt, and it is hot in the south of Upper Egypt with its low compared to the past days.

This comes as a result of the expectation that a strong air rise will be concentrated over important areas of western Europe, and accordingly, cold air masses will move towards the eastern parts of it, reaching the Balkan countries and Turkey, which means that the Egypt region will become within the path of moderately warm air masses.

And the Arab weather recommends that in light of this climate of change of weather and expected thermal fluctuations in the coming days, some may be exposed to many health problems due to the sudden difference in temperatures.

For more details via the detailed five-day bulletin, here