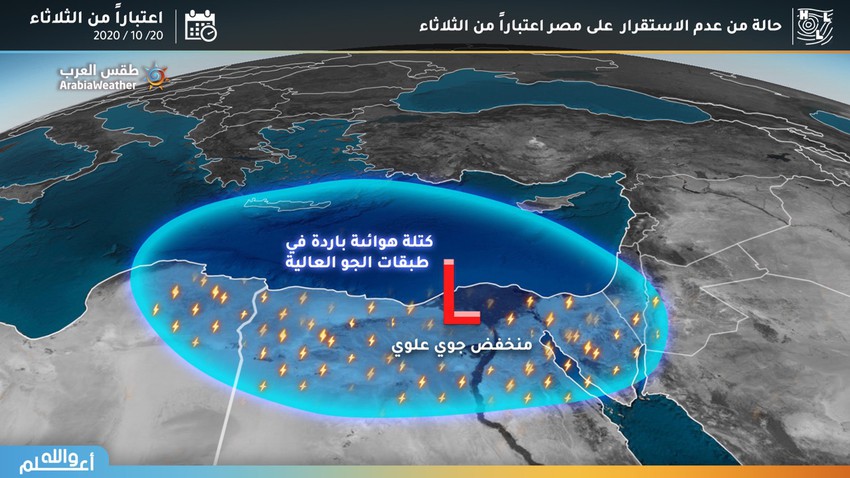 Arab Weather - The weather maps and the latest updates issued by numerical models in ArabiaWeather still draw a state of air instability over the republic as of Tuesday and will continue until the end of the week, as it is expected that many regions of northern and central Egypt will witness thunderstorms, and also Dust waves in some ranges.

Conditions of atmospheric instability usually occur when the thermal difference between the upper and lower layers becomes large, and this is what will happen when a cold air mass passes in the high layers of the atmosphere over Egypt in conjunction with the warming of the lower layers of the atmosphere, starting from Tuesday, when a state of air instability will form Thunderstorms are working on a proliferation of thunderstorms from northwestern Egypt on Tuesday to become inclusive of all the northern coast, including the city of Alexandria, the central region, the delta, Cairo and Sinai on Wednesday and Thursday.

Tuesday the start of air instability

The northwestern region of the republic is affected by rainy thunderstorms resulting from the region’s beginning to be affected by a state of atmospheric instability, as heavy thunderstorms of rain fall on Marsa Matrouh and the western coasts near the Libyan border. On Tuesday, thunderstorms are actively accompanied by the speed of dusty and dusty winds. It may also be associated with a cold snap.

More rain on Wednesday and until the end of the week

The rainfalls intensify on Wednesday throughout the western sector of the country in addition to the entire northern coast, the delta region, and the capital, Cairo, and torrents form in large areas, and the water level rises in the roads

The amount of rain fall includes more areas on Thursday, with the concentration of the depression associated with the cold air mass in the high layers of the atmosphere over the coast of the delta, and more rainfalls throughout the north and center of the country, and heavy thunderstorms in the Sinai Peninsula with a high probability of the formation of torrents.

It is noteworthy that the expected rainy situation will be classified as medium in intensity and carry good amounts of rain for all regions of the republic in addition to that the intensity of rain will be high in some geographical areas and thus the chance of torrential formation and the high water level will be high in many areas, including the capital Cairo and the city Alexandria.

Will the chances of rain improve in November, and what about December and January?

A Saudi astronomer inspired an Indian: a second moon on Earth on Friday