Egypt | A rise in temperatures in the first half of the week and a new moderate air mass, starting from Wednesday 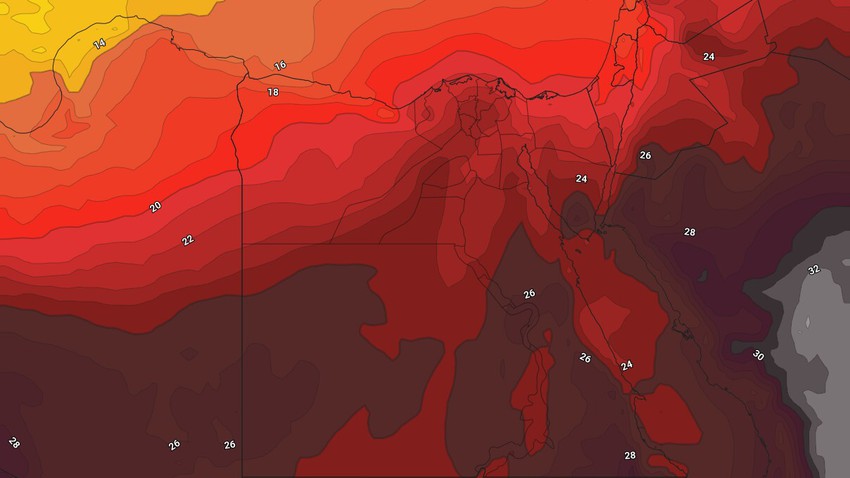 Arab weather - The latest numerical maps treated internally in Arab weather indicate an expected temporary rise in temperatures during the first half of the week due to the rush of hot air currents coming from the African desert that raise temperatures to more than their normal rates, provided that they return to decrease again as of From Wednesday, God willing, and here are the details:

Temperatures above normal in the first half of the week

In the details, it is expected that hot air currents coming from the African desert will rush on Monday and Tuesday, raising temperatures to become higher than their rates for this time of the year, to prevail in the northern coasts, and hot in the Lower Egypt and Greater Cairo regions, all the way to northern Upper Egypt. In the south of Upper Egypt, the weather remains very hot, with temperatures approaching the mid-40s. In this climate, Arab weather recommends not direct exposure to sunlight for long periods in the southern regions, drinking a lot of cold liquids and refreshments throughout the day, especially in the southern regions, and not leaving sterilizers and any flammable materials inside vehicles, in addition to not leaving children inside vehicles. Even for a short period of time.

The latest weather updates indicate indications of a new moderate-temperature air mass rushing towards the eastern Mediterranean, as of Wednesday, with temperatures continuing to become lower than their annual rates for this time of the year, so that hot weather prevails throughout the northern regions, and the southern regions will not be immune. About this drop, temperatures become thirty in those areas.

Weather of Arabia: Dust waves form in the western parts of Egypt and a high concentration of dust in large parts of Lower Egypt