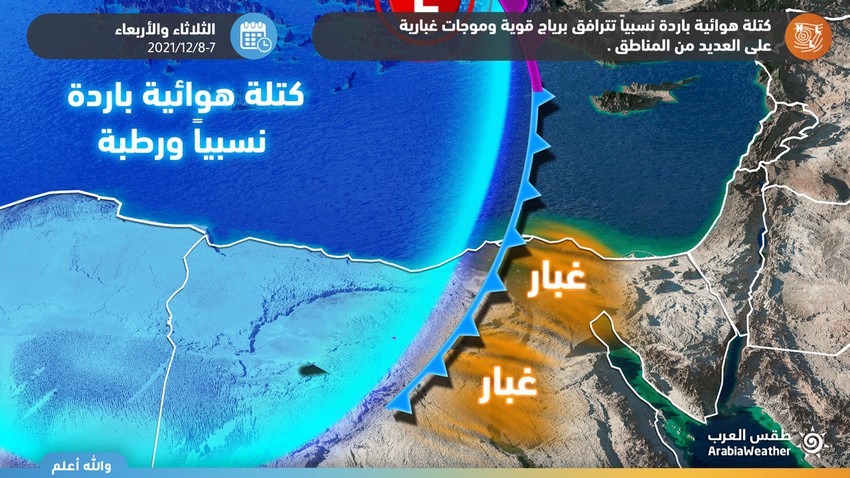 Weather of Arabia - The outputs of the computerized models indicate that the country is affected by an extension of an air depression that is accompanied by a relatively cold air mass so that many weather phenomena prevail, most notably the chances of rainfall in the northern coastal areas, in addition to a great activity in wind speed that causes dust waves in many areas, and the following details:

If you are browsing from your phone, you can download the Arab Weather application, which provides accurate weather forecasts for thousands of regions in Egypt.

Chances of rain are concentrated on the northern coast

In the details, a relatively cold air mass approaches the central basin of the Mediterranean, to rush hotter air currents than usual on Tuesday, with temperatures tending to rise in all parts, so that pleasant weather prevails in the northern regions, generally moderate in the rest of the regions, and with the approach of an atmospheric pressure system Low The southwest winds are active starting from the western regions, and with the noon and afternoon hours, they are active in the rest of the regions, and as a result, the levels of dust in the atmosphere rise.

On Wednesday, the direct effects of an atmospheric depression centered in northern Cyprus and accompanied by a relatively cold air mass begin, bringing temperatures down in all regions, and the western winds are energized, accompanied by strong gusts, sometimes exceeding the 80 km/h barrier in some areas, which works to form waves. Dust starts from the western regions, especially Matrouh Governorate, and gradually moves the raised dust to include large parts of the north of the country, including Greater Cairo. 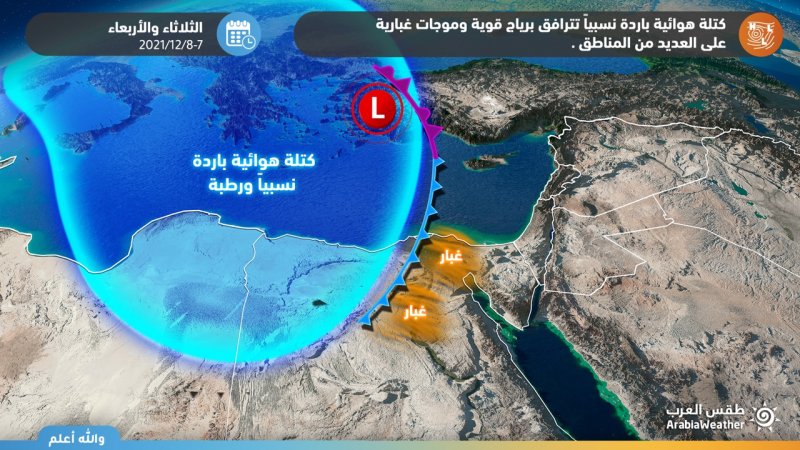 The same winds raise the waves additionally in the Mediterranean, which increases the sea’s turbulence and the difficulty of marine activities, while the waves are medium to high in the Red Sea, which causes partial disruption to the navigation movement.

This atmosphere is accompanied by several alerts issued by the Arab weather forecast cadre, most notably: