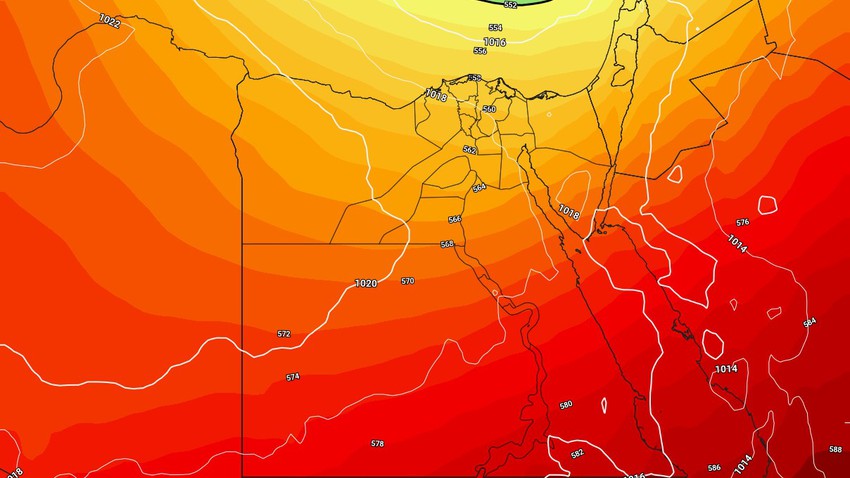 Weather of Arabia - the northern shores of Egypt are affected on Thursday by a low air mass and an air mass with lower temperatures, so that a cold and pleasant atmosphere prevails in the northern shores and is pleasant in the rest of the regions, with the emergence of quantities of clouds at different heights and there is an opportunity for showers of rain in the coastal areas The winds will be north, fluctuating in direction and moderate in speed, and being westerly moderate to active speed over the northern regions and work to disturb the waves in the shores of the Mediterranean and raise dust in the interior.

The weather is also relatively cold to cold at night hours, with the continued emergence of quantities of clouds, so that the chances of rain remain in the far northern regions, and the winds are northerly, fluctuating and light to moderate speed, and they are north to northwesterly moderate in speed and accompanied by active gusts that lead To the continued turbulence of waves on the shores of the Mediterranean and their turbulence on the shores of the Red Sea.

A further decrease in temperatures will occur on Friday, and the weather will be cooler in the northern regions and gentle in the rest of the regions, with the continued appearance of clouds in the northern regions and sporadic showers of rain in those areas, and the winds will be westerly to northwesterly moderate, and accompanied by active gusts. Sometimes they are very dusty and work on higher waves in coastal areas.

The effect of the extension of the depression in the north of the country diminishes in the hours of Friday / Saturday night, so that the quantities of clouds decrease and the chances of rain diminish, as the weather turns to become cold over all regions, God willing.

Significant rise in temperatures on Saturday

Numbers that will surprise you: What are the most forested Arab countries?